Dodgers vs Brewers Picks and Predictions: Milwaukee Evens the Series

L.A. struck first in a four-game set against Milwaukee last night, but the Brew Crew will send Brandon Woodruff to the mound looking to level it up. Our MLB betting picks break down why the Brewers are in good shape today vs. the Dodgers.

The Los Angeles Dodgers and the Milwaukee Brewers will continue their four-game set at American Family Field on Tuesday night.

The Dodgers fired the opening salvo on Monday, prevailing 4-0 as heavy favorites behind Julio Urias, but now the Brewers are favored at home behind Brandon Woodruff in this spot against rookie right-hander Ryan Pepiot.

Can L.A. pull off a rare upset win here? Find out in our free MLB picks and predictions for Dodgers vs. Brewers on Tuesday, August 16.

The Brewers opened as tepid consensus favorites of -113 and have since floated up to the -120 to -130 range.

If you're betting on MLB tonight, here are two of the best bonuses* available:

Ryan Pepiot (1-0, 3.92 ERA): Pepiot is on his third major-league call-up this season, and he’s been serviceable for the Dodgers in his rookie campaign. His 23 strikeouts over 20 2-3 innings are impressive, but his 15 walks in that same span are not. Pepiot is 8-0 with a 2.27 ERA in Triple-A this year.

Brandon Woodruff (9-3, 3.52 ERA): Woodruff has channeled his vintage self after a shaky start to 2022. He has a 56-14 strikeout-walk ratio over his last eight starts and has allowed only two homers over his last 48 1-3 innings of work. This will be his first start of the year against the Dodgers.

The Over is 15-5-1 in the Brewers’ last 21 Game 2s of a series. Find more MLB betting trends for Dodgers vs. Brewers

Dodgers vs Brewers picks and predictions

Even the Dodgers’ depth can be tested at times, as Ryan Pepiot steps in to essentially take Walker Buehler’s spot in the rotation following the news that he’s undergoing season-ending surgery.

With the Brewers sending out one of their better arms in Brandon Woodruff for this contest, it’s no surprise that L.A. is a slight underdog. However, that does not make it the better bet.

Pepiot was last seen allowing four runs over 4 1-3 innings to the Twins on Wednesday. His 3.92 ERA over 20 2-3 innings this year is belied by his inflated 5.24 FIP, meaning he’s been lucky the damage hasn’t been worse against him.

In his brief stay in the majors, walks have been a big issue for Pepiot, as he’s issued 15 free passes. Milwaukee is as patient as any team in the majors, ranking sixth in walks drawn this season.

Unlike Monday night, when they faced southpaw Julio Urias, the Brew Crew’s left-hand heavy lineup will be at an advantage against the orthodox Pepiot. The Brewers are 7-1 in their last eight home games against right-handed starters.

Meanwhile, Woodruff has overcome a slow start to the 2022 campaign and has now authored a quality start in six of his last seven efforts.

Since coming off the IL on June 28, his ERA is 2.42, and his WHIP is 1.06. Woodruff has seen the Dodgers just once since 2019 but twirled a gem against them last season, allowing only two earned runs over six frames while fanning six batters.

This decisive edge in the starting pitching battle should be all the Brewers need to emerge victorious.

The pieces are in place for Over bettors to cash in on this Tuesday night affair.

Pepiot has averaged just 4.13 innings per start in his fledgling MLB career, so the Dodgers bullpen appears to be in for a workout in this one.

Manager Dave Roberts has to weigh the pros and cons of pulling out all the stops in trying to win this game while thinking ahead to Wednesday and Thursday’s meetings with Milwaukee. If L.A. falls behind early — a distinct possibility — Roberts could essentially wave the white flag and send out the second-rate relievers from his top-ranked relief corps.

Uninspiring depth pieces like Phil Bickford (5.05 ERA) and Reyes Moronta (4.50 ERA) — both of whom are righties just like Pepiot — may be called upon to spell the Dodgers’ better arms if this one gets out of hand.

Meanwhile, the Dodgers’ offense is still a unit that’s capable of breaking out, especially on the road, where they’ve recorded an MLB-high 5.51 runs per game. They may have difficulty getting to Woodruff, but with the mediocre Brewers bullpen (19th by ERA at 3.95) to consider, an Over doesn’t seem to be a far-fetched notion at all.

Max Muncy had another extra-base hit on Monday night and owns a 1.352 OPS in August. Look for him to continue his second-half surge as usual suspects Mookie Betts (.321 batting average) and Will Smith (.381 batting average) do their thing at the plate.

The Brewers may not even need big nights from hit leaders Christian Yelich and Andrew McCutchen to prevail in this one.

Keston Hiura and Kolten Wong have some dramatic handedness splits on the year, biased towards right-handers. Hiura is hitting .296 against righties but only .175 against lefties. Wong’s averages are .282 and .129, respectively.

Rowdy Tellez has hit 21 of his 24 taters off orthodox hurlers this season. He’s also heating up at the dish in August, authoring a 1.071 OPS.

Woodruff should make for an easy night for manager Craig Counsell when it comes to navigating the bullpen. He’s 5-0 with a 2.38 ERA and .171 opponent batting average in seven starts at home this season, going at least six innings in all but two of those efforts.

Brad Boxberger (2.51 ERA, 20 holds) and Devin Williams (1.62 ERA, 25 holds, seven saves) have had plenty of time off between them and should get Milwaukee bettors through the final two frames. 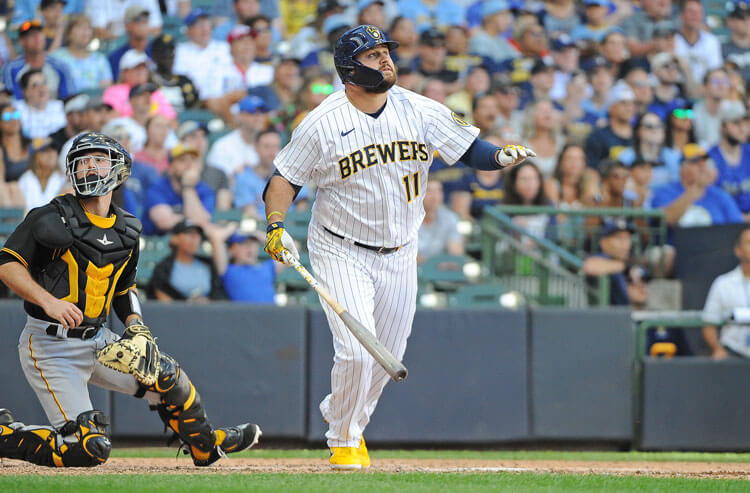 Dodgers vs Brewers Picks and Predictions: Milwaukee Evens the Series
Provided by