The Dodgers are heavy favorites to take another game off the Cubs, but the books might be underestimating Chicago's starter. Find out why there's value in the road dogs with our Cubs vs. Dodgers picks.

The Los Angeles Dodgers will look to build on their 6-2 win last night against the Chicago Cubs after getting no-hit by four Chicago pitchers on Thursday. The Dodgers had dropped four straight before the late-inning heroics yesterday.

Saturday’s primetime matchup is big for both teams as the Cubs trail the Central-leading Brewers by just a single game, while the Dodgers are tied for second place with the Padres in the NL West.

Here are our free picks and predictions for Chicago Cubs vs Los Angeles Dodgers for Saturday, June 26.

As of 4:15 p.m. ET today, Los Angeles is out to a -220 favorite at TwinSpires, after opening at -185 and spending some time at -200. The Dodgers are attracting 59 percent of moneyline bets and 73 percent of moneyline dollars, but more concerning is L.A. parlay play. "We’ll be rooting for the Cubs to break up the parlay liability surrounding the Dodgers," TwinSpires trading analyst Zachary Lucas said. The total is fairly stable at 9, with tickets and money both in the 2/1 range on the Over.

Alec Mills (3-1, 5.18 ERA): Alec Mills has been filling in the rotation while Chicago deals with injuries to some of its better pitchers. He has made two starts this month and has given up just three runs over 9 1-3 innings. He lasted just 77 pitches in his last start but has been serviceable, allowing just two walks and striking out nine over the pair of starts. He has also yet to give up a long ball over his last 15 innings.

Julio Urias (9-3, 3.99 ERA): The talented 24-year-old left-hander leads the Dodgers rotation in wins at nine but is coming off his shortest start of the season after giving up six runs across four innings versus the Padres. Urias has given up at least one homer in six straight starts and has seen his ERA increase by nearly a full run over the last month. Opponents have a .894 OPS against Urias this month and the lefty has a 5.10 ERA in the game’s first two innings this season.

The Under is 3-0 in Alec Mills’ three starts this season. Find more MLB betting trends for Cubs vs. Dodgers.

The Dodgers entered their four-game series versus the Chicago Cubs on the heels of a three-game sweep at the hands of their rivals, the San Diego Padres. They continued their losing ways on Thursday after getting no-hit by Zach Davies and the Cubs’ bullpen, followed by a late-inning win last night thanks to a four-run eighth. Over the five-game stretch, the Dodgers have led for just four of the 45 innings.

The Cubs are also trying to get back to their winning ways but have dropped their last two series. A matchup with Los Angeles is not always good news for most teams, but the Cubs have dominated the season series up to this point, having won five of the seven matchups and outscoring L.A. 32-20. The price is right if you’re liking Chicago, as they opened at +165 road dogs.

A lot of that pricing has to do with the pitching matchup. Urias leads one of the most talented rotations in baseball in wins, but he hasn’t been lights-out of late, as we mentioned above. He has been giving up too many hits – 33 over his last 25 innings – and has been hit hard with six homers over that stretch, as well. He’s picked up just two wins over his last five starts and now faces a Chicago offense that has launched the second-most home runs over the last 30 days and is averaging 1.5 long balls per game.

The public will be likely hitting the Dodgers’ runline hard, as they see Alec Mills on the mound for the Cubs. However, Mills has done a great job of filling in the rotation. He keeps the ball in the park, doesn’t walk many, and keeps contact light with a 3.7 barrel percent. Even if Mills can’t get deep, he will turn things over to the best bullpen in baseball, as the Cubs relievers have a league-best 2.70 ERA.

Give us that big plus money for the visitors.

The Chicago Cubs have the league’s second-best Under record with a mark of 30-43 O/U. The Cubs tend to shut things down late (excluding last night) with a bullpen that has allowed the fewest runs by a fair margin. The Cubs have hit the Under in five straight games and with the books assuming the L.A. bats are going to get to the Chicago starter, we’re actually getting a pretty high number on the total at 9.

The Dodgers rank 21st in SLG percentage over the last two weeks and are scoring just three runs per game over their last 10 against teams not named the Arizona Diamondbacks. They are without former World Series MVP Corey Seager, who has been shut down since mid-May. The bottom of the Dodgers’ lineup is not nearly as threatening with Will Smith, Gavin Lux, A.J, Pollock and Zach McKinstry occupying the bottom spots.

The L.A. bullpen showed off its talent last night and will be ready to go if Urias can’t get deep. When a team can throw Joe Kelly, David Price, Jimmy Nelson, Blake Treinen and Kenley Jensen at you like L.A. did last night to Chicago, you’re going to struggle to string hits together.

The early innings are going to tell us how this bet is going to hold up, but if both teams can get into the bullpen, we have a lot of faith in the Under 9. 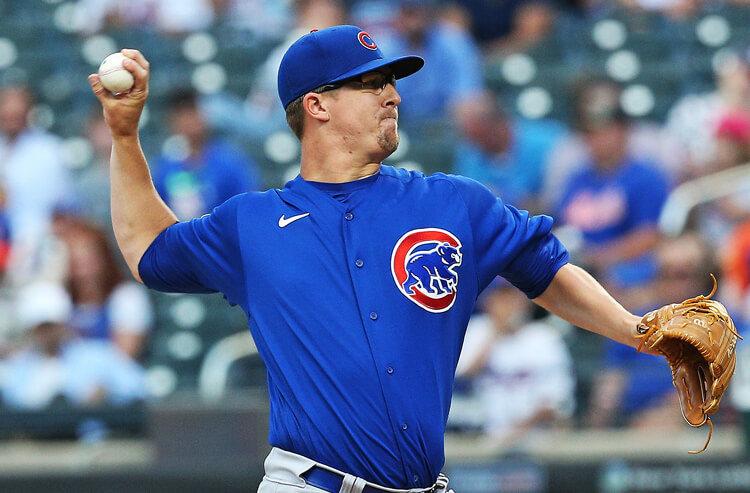 Cubs vs Dodgers Picks and Predictions: Chicago Has Sneaky 'Dog Value
Provided by