Our best MLB prop bets for Saturday include the almost unthinkable: fading Jacob deGrom. Find out why we're backing this play, along with the rest of your best prop bets from today's baseball action.

The MLB season is in full swing and with it all the betting markets that we’ve come to love/hate. We’re seeking out the weekend’s best MLB prop betting options from across the baseball schedule.

Today, we’re doing the unthinkable and fading the best pitcher in baseball, looking to keep the plus-money Blue Jay fade train rolling and keeping it simple with a play on the league’s hottest bat.

Check out our favorite MLB free prop bets and predictions for Saturday, June 26, 2021.

It's deGrom Day, which means we have the pleasure of watching one of the best pitchers ever in his prime. How good is New York’s Jacob deGrom? He owns a 0.50 ERA over 72 innings pitched and also leads the league in K/9 and WAR.

With how good deGrom has been, the real truth is that we aren’t getting any bargains when it comes to his prop markets. He's also coming off of some shoulder discomfort two starts ago, which is concerning, but he didn’t miss a start.

He only threw 70 pitches in his last start after being forced from his June 16 game against the Cubs. But even in those 70 pitches, he managed to get 15 outs, gave up just one hit and struck out six. This is just speculation on our part, but we doubt they let deGrom go deep in Saturday’s tilt with the Phillies. Our best guess would be 80-85 pitches

It could be really difficult to hit the 10-strikeout mark with a shorter leash than usual. The Mets’ starter and frontrunner for the NL MVP has topped nine punchouts just twice over his last eight starts and that was when he had no limitations.

The Phillies struggled earlier in the year with strikeouts, but over the last month sit in 22nd amongst the league in K percentage at 22.2 percent. It’s never fun betting against the best, but this looks like a market we can exploit, especially when his total out market is paying -175 for Under 18.5 outs.

If it ain't broke, don’t fix it. That’s the mentality we’re taking with one of the more unique props available — the highest-scoring period - rest of the game. The Jays had their stuff together over the last week, having won five straight games heading into Friday’s game against the Orioles, but another collapse from the bullpen, and subsequent loss, has set them back.

The bullpen is still a mess despite some recent success earlier in the week. Over the last 30 days, it's 4-7 with a 4.99 ERA, which is the league’s fifth-worst over that stretch. Not to be outdone is the Baltimore bullpen, who got torched by the Jays last weekend and have a 5.52 ERA over the last month. This game is shaping up to have some late fireworks and with the highest-scoring period always paying plus money for the sixth inning on, we’re hitting this prop for a third straight TOR/BAL game after hitting a pair of big plus-money plays last weekend.

Last Saturday, both clubs totaled six runs in the game’s first five innings but potted another 10 in the following four innings. The Sunday game also produced another winner, with six runs crossing the plate in the later innings.

Toronto ace Hyun-Jin Ryu should keep the Orioles’ offense at bay for the game's early innings, but the lefty has made it past the sixth inning just once in his last four starts. This gives a Jays bullpen ample opportunity to make things interesting down the stretch.

Baltimore’s Keegan Akin is the wild card here, but because of his inconsistencies – he had a 3.60 ERA just four starts ago – we’re getting another solid number on one of our favorite props. If the Jays and Orioles score more runs after the fifth inning than they did in the game’s first five frames, we cash.

Washington’s Kyle Schwarber has been an absolute wrecking ball over the last two weeks. Since June 12, the Nationals’ leadoff man has launched 13 long balls across 53 at-bats which equates to an insane 1.537 OPS. Seven of those four-baggers have come over the last week (including another last night) as he has posted three multi-homer games since June 20. If you’re looking for a hot bat to crush some player props, Schwarber is your guy.

On Saturday afternoon, the Nats’ OF will face Miami’s rookie pitcher Zach Thompson. The big righty is enjoying a great start to his MLB career with a 1.50 ERA over his first three starts, but the good times can’t last forever for the former fourth-round pick. Thompson has allowed just three runs over his first 12 innings in the Bigs but had a 6.60 ERA and a 1.60 WHIP in 15 Triple-A innings this year before the promotion.

Even if he’s on, he won’t last long and will likely give way to the bullpen somewhere in the fifth inning, giving Schwarber ample opportunities to rack up bags against a Miami bullpen that sits in the Top-10 in hard-hit ball percentage against.

Since getting moved to the top of the order on June 13, the former Cub is 20 for 49 (.408) with 12 homers. It’s been all or nothing though as Schwarber has only collected singles and home runs over that stretch. But with his home run prop hitting +225, we like the Over 1.5 total bases at -130 better. 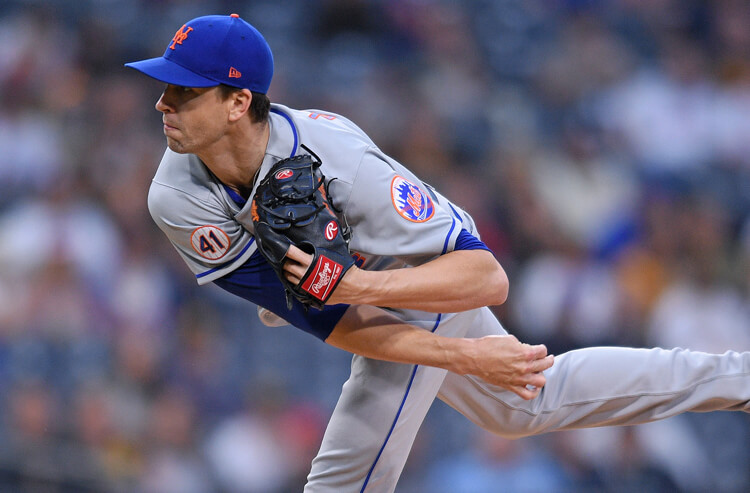