Cubs vs Brewers Picks and Predictions: Hendricks in Trouble in Milwaukee

An NL Central clash in Milwaukee continues today, with Chicago trying to rebound from a series-opening loss. The Cubs face an uphill challenge with Kyle Hendricks on the mound — and our MLB betting picks expect the Brewers to punish him.

The Chicago Cubs and Milwaukee Brewers face off in an NL Central showdown on Tuesday night. This is the second contest in a three-game set at American Family Field.

The Brewers beat the Cubs 5-2 last night and oddsmakers expect them to win again, with MLB betting lines opening with Milwaukee as a -134 home favorite for tonight's showdown.

Here are our best free Cubs vs. Brewers MLB picks and predictions for July 5.

This line hit the board with the Brewers at -130 and the Over/Under at 8.5. Early money has come in on the Over, shifting the total to 9 at some books with others still dealing at 8.5 and juiced towards the Over.

Kyle Hendricks (4-6, 4.76 ERA): The veteran right-hander has struggled in each of the last two years, pitching to an almost identical 4.77 ERA in 2021. In 15 starts this year Hendricks has a 1.29 WHIP and .263 OBA. In his previous outing, last Thursday, he allowed six hits and two runs in six innings vs. the Reds.

Jason Alexander (2-0, 3.82 ERA): The 29-year-old rookie earned a spot on the Brewers when Brandon Woodruff was sidelined and looks to stick around at the back of the rotation with Adrian Houser now on the IL. In his last outing, Alexander surrendered three hits and two runs in two innings of relief work against the Pirates last Thursday. Alexander is a ground ball pitcher who relies on his sinker and slider to try and force soft contact.

The Over is 9-2-1 in the Brewers' last 12 games overall. Find more MLB betting trends for Cubs vs. Brewers

Cubs vs Brewers picks and predictions

The Brewers sit atop the NL Central with a 47-35 record and beat the Cubs in extra innings last night, thanks to a Victor Caratini walk-off home run in the 10th inning. The Cubs are 32-48 on the year and have gone just 3-10 in their previous 13 contests on the road.

The batting edge for the Brewers should be a big factor, since the starters for both sides are major question marks.

Milwaukee's Jason Alexander is a career journeyman with a relatively small sample size to draw on. He's a ground ball pitcher that has been getting hit a lot harder than he should, and his expected ERA of 6.00 is cause for alarm.

The Cubs will send Kyle Hendricks and his 4.76 ERA to the mound. In seven starts against the Brewers over the last two seasons, Hendricks has pitched to an ugly 6.89 ERA with a 1.75 WHIP.

I don't trust either starter but the Brewers have the superior lineup and bullpen, and have home-field advantage. I'll gladly put my money on them at -130.

Both teams have been crushing the ball lately, with the Brewers leading the majors in OPS (.846) and averaging 6.0 runs per game over the last 15 days. Over that same span, the Cubs are fourth with an OPS of .814 while plating 5.62 runs/game.

Add in a pair of volatile starters and this total of 8.5 looks too low.

Not only has Hendricks struggled this year, but he's been getting hit hard on his four-seamers and sinkers — both offerings that Brewers hitters have been feasting on.

With Hendricks playing poorly, the Cubs bullpen looking extremely inconsistent, and the Brewers raking, I'm taking the Over 4.5 on Milwaukee's team total. 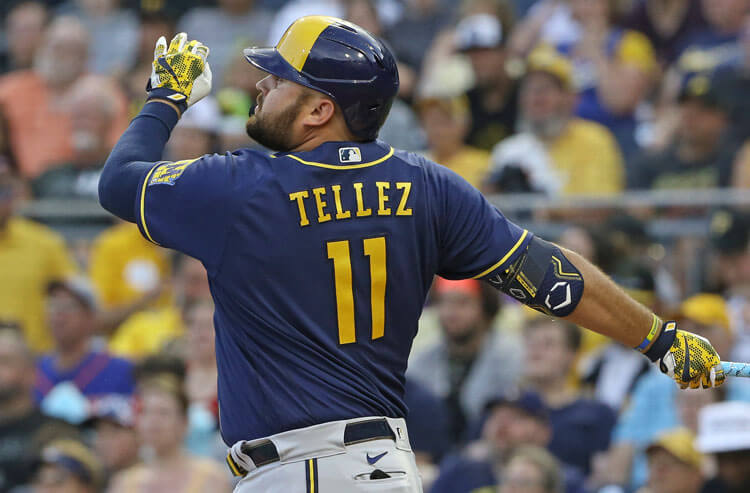 Cubs vs Brewers Picks and Predictions: Hendricks in Trouble in Milwaukee
Provided by