Braves vs Dodgers NLCS Game 5 Picks and Predictions: Can Braves Close Out Defending Champs In Their Park?

The Braves have an opportunity we didn't think many teams would have — to close out the defending champion LA Dodgers in convincing fashion. Find out if we're backing Atlanta to seal the deal tonight in our Dodgers vs. Braves picks. 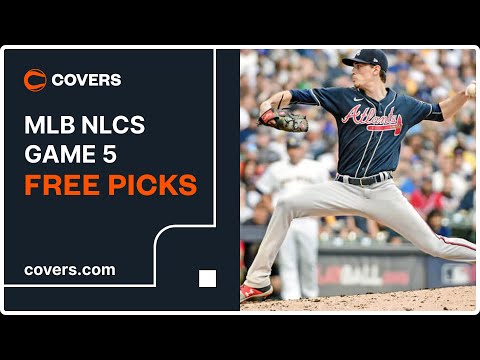 The defending champs are on the ropes as the Los Angeles Dodgers trail the Atlanta Braves 3-1 in the NLCS and now will have to play Thursday’s elimination game without Justin Turner who has been ruled out for the remainder of the playoffs with a hamstring injury.

The Braves are in great shape on the mound and send lefty ace Max Fried to the bump while the Dodgers will counter with another bullpen day as they did in Game 1 of this series and Game 5 of the NLDS.

Here are our free picks, predictions and MLB odds for Braves vs. Dodgers for Thursday, October 21.

Max Fried (Postseason: 1-0, 1.50 ERA): Lefty Max Fried started Game 1 of this series and went six innings allowing two runs on eight hits with five strikeouts and no walks. The outing pushed his 2021 postseason ERA to 1.50 and he’s now struck out 14 and, more impressively, walked none. The 27-year-old will be on his regular four days of rest and he threw just 87 pitches last Saturday and could help bail out a tired bullpen. Fried could help the Braves reach the World Series for the first time since 1999.

Bullpen (Postseason: 3.11 ERA): Dave Roberts will go to a bullpen day for Game 5 which might seem ridiculous considering the Dodgers had one of the best rotations in baseball following the Max Scherzer trade. Roberts will likely follow a strategy similar to Game 1 where Corey Knebel opened and gave way to seven other relievers to somewhat positive results — three runs allowed on six hits and three walks. The LAD bullpen has a 4.50 ERA in this series and has thrown 22 innings across four games.

The Under is 8-0 in Fried’s last eight starts as a road underdog. Find more MLB betting trends for Braves vs. Dodgers.

The Braves rewarded bettors who were brave enough to take them on the moneyline last night as they cashed as +214 road dogs on a bullpen day. Atlanta wasted no time and jumped out to an early 4-0 lead by the third inning thanks to home runs from Eddie Rosario, Adam Duvall and Freddie Freeman. This Atlanta offense has not been overmatched by the big arms of the L.A. rotation and can go toe-to-toe with either of the AL lineups. They’re hitting .306 at Dodger Stadium this series and come into Game 5 at +131 on the ML despite a pitching matchup and momentum on their side.

Being an underdog has worked fine for Brian Snitker’s club as out of their six playoff wins, all but one have been at -110 or better. Fried closed at -103 in Game 1 and getting him at +131 against a tired L.A. bullpen and a lineup missing its No. 3 hitter seems like a great price to back the dog here Thursday.

Fried will likely have a long leash as the Braves have used two of their important relievers (A.J. Minter and Tyler Matzek) in back-to-back days and used six relievers in total yesterday. Fried went seven or more innings in all three of his final starts during the regular season. He also has a filthy 1.46 ERA since August which is a stretch of 13 starts and was the best pitcher in baseball in the second half. The Dodgers are in a real tough spot Thursday night and will have to earn a win as Fried’s control has been elite with zero walks allowed over his last four starts.

The Dodgers are hoping to have the same success with their bullpen day today as the Braves did yesterday; however, with this being the third game in a row, there may be fewer arms available for the Dodgers.

Corey Knebel is a candidate to start as he opened the Dodgers’ bullpen day in Game 1. He gave up one run in his one inning of action in that game as Rosario scored on a wild pitch. Dave Roberts will have some serious decisions to make as the bullpen tossed four innings yesterday (three relievers) and another 5 1-3 (eight relievers) on Tuesday. It wouldn’t surprise us if Max Scherzer or even Walker Buehler were in the bullpen today. With so many questions and Roberts likely putting his pitchers into unfamiliar situations, we’re taking the Braves to wrap this thing up today.

The Over is 3-1 so far in the series but Over backers got lucky last night with a four-pack of runs coming in the top of the ninth in a 5-2 game. The Over was the right play yesterday with Atlanta on a bullpen day and the total at a flat 8, but with Fried on the mound, we aren’t so sure about paying for nine runs again today.

Both Fried’s starts in the playoffs have hit the Under comfortably with a 3-2 and 3-0 final in those starts. On the road, the Under is 8-1 in Fried's starts and a perfect 3-0 to the Under against the Dodgers this season.

The Atlanta bats were hot last night launching four home runs but prior to Game 4, the Braves had just two long balls in the series’ first three games while Game 1 hero and clean-up hitter, Austin Riley, is 1 for his last 12 and hasn’t collected a hit since Game 2. In a game where they scored nine runs, Atlanta only managed six runners in scoring position all game yesterday.

The top of the L.A. order has also gone ice-cold as Mookie Betts, Corey Seager and Trea Turner went a combined 0 for 11 last night and are hitting a combined .191 this series. Justin Turner wasn’t hitting too well but his absence will definitely weaken this Dodgers’ lineup.

The Dodgers’ will have to use a lot of arms Thursday and Phil Bickford, Justin Bruihl and Tony Gonsolin have all pitched on back-to-back days. Blake Treinen and Kenley Jansen might be asked to pitch more than three outs which also has us leaning on the Under despite the unfamiliar territory for L.A.’s top relievers. Walker Beuhler and/or Max Scherzer may also be available to throw an inning. The Under hit easily in Game 1 when Dave Roberts used the same bullpen approach.

All hands will be on deck and with everything on the line. We might even see some free outs via the bunt, especially with Fried hoping to get deep.

Braves vs Dodgers NLCS Game 5 Picks and Predictions: Can Braves Close Out Defending Champs In Their Park?
Provided by