Toronto has been falling apart of late — especially its bullpen. With Chicago cleaning up its act and sending the better pitcher to the mound Wednesday, we like the dogs to take care of business at home. Check out today's MLB betitng picks.

The Toronto Blue Jays will be looking to salvage a three-game series versus the Chicago White Sox in the Southside after dropping the first two games — both by a single run. Last night’s 7-6 defeat was especially tough on the 38-30 Jays, who had the lead in the 9th, 10th and 11th innings and failed to grab the victory.

It will be a quick turnaround for both teams with today's 2:10 pm ET start after last night's 12-inning, four-plus hour battle.

Can both offenses continue to stack runs in the series, or can these bullpens turn a 180 and lock things down? Find out in our free MLB picks and predictions for Blue Jays vs. White Sox on Wednesday, June 22.

The Blue Jays opened as -120 favorites and went as short as -130 before being bet back to -115. Toronto closed as the underdog in both games so far in the series. The total opened at 9.5 and is leaning to the Under. It’s the highest total of the series after closing at 8.5 and 9.

Ross Stripling (3-2, 3.28 ERA): Since joining the rotation earlier this month, the former middle-reliever has made three starts and surrendered just two runs. He didn’t have a great start at home vs. the Yankees in his most recent outing, where he recorded just 11 outs. The right-hander has a career 5.84 ERA. His changeup is his best weapon (.154 average against) but he likely won't go long and gives way to a Toronto bullpen that lost a ton of confidence last night.

Blue Jays: George Springer OF (Out), Trevor Richards RP (Out).
White Sox: Luery Garcia OF (Questionable), Eloy Jiminez OF (Out), Yoan Moncada 3B (Out), Yasmani Grandal C (Out), Liam Hendriks RP (Out).

The Over is 6-0 in the last six meetings. Find more MLB betting trends for Blue Jays vs. White Sox

The Jays carried a two-run lead into the bottom of the ninth inning last night, and then one-run leads in the 10th and 11th innings, but couldn’t get the victory. The Jays’ offense has not been the issue during this three-game set, as they’ve scored 13 runs in the first two games, but the pitching has been suspect of late.

Over their last three series (Orioles/Yankees/White Sox), the Jays are 3-6 SU and have allowed 64 runs. It's been a mixed bag of inconsistent starting pitching and bullpen disasters. Over the last seven days, only the Cubs have a worse team ERA than Toronto’s 6.99. The blame is split pretty evenly between the starters and relievers, as the starers have a 6.96 ERA over the past week and the bullpen owns a 7.02.

Stripling is a candidate to give up some runs, as he has been pitching above his talent over his last three starts. The hitting conditions are decent at Guaranteed Rate Field and Stripling can get barrelled up, with a barrel% that ranks in the bottom fourth of the league. He will also give way to a bullpen that used its best arms yesterday to bad results. The Jays’ top arms have all pitched twice over three days, while closer Jordan Romano has thrown 51 pitches in two appearances since Sunday.

The Chicago offense is missing some familiar names but it hasn’t slowed them down over its last eight games, where the Sox are averaging 8.75 runs per contest. Chicago has been getting a ton of traffic in this series as it went 15-for-45 yesterday (6-for-21 RISP) and 13-for-35 (1-for-8 RISP) in the opener.

Chicago is hitting .350 in the series and will be facing a beat-up bullpen, a starter likely to regress, and an offense that will be without its leadoff hitter and center fielder in George Springer who exited last night.

The top of this Chicago order could do some damage today, and although Lucas Giolito has been in a rut over his last four starts, he is still the better of the two starters. We’re happy to hit the underdog home team with the Jays in a getaway game.

The Over has hit in both games in this series but the books have adjusted the total, as tonight’s rubber match sits with a total of 9.5 leaning to the Under.

For us, all signs point to the Over this afternoon.

First, the conditions are prime, as Guaranteed Rate Field has positive hitting conditions with mid-80s temperatures and slight wind blowing out to center. Ball Park Pal has it at +15% for home runs, which is key because Giolito is a home-run pitcher and Stripling has 26 home runs allowed over 148 innings since 2021.

Secondly, both starters aren’t known for getting deep into games and could hand things over to the pen earlier than either manager wants. The bullpens were busy last night and Chicago closer Kendall Graveman has pitched in back-to-back games making him questionable for today. The Chicago pen hasn’t been as awful as the Jays’ lately, but it still sits in the bottom-third in ERA on the season.

Finally, both offenses can rake. The Jays, even without Springer, are still deadly and they put a lot of balls into play. Chicago started slow offensively to begin the year, but it has hit its stride of late and is creating runs at the second-best rate in baseball over the last two weeks.

We should see plenty of two-way scoring. Who doesn’t want to watch a little Over baseball in the afternoon?

The Chicago offense is hitting .350 in the series and has had so much traffic on base that it's had 28 at-bats with runners in scoring position in the series.

Leading the way for the Sox is Luis Robert who is healthy and locked in. He’s hitting .433 over his last seven games and slugging .633. He’s also riding an impressive 12-game hitting streak and is 4-for-8 in the series with six RBI, a home run, and eight total bases.

He’s collected at least two hits in four straight games and six of his last eight. He's a dangerous batter right now and sits in the Top 10 in AL MVP odds.

Stripling is a fastball/changeup/slider pitcher. Robert is a decent fastball hitter but he absolutely annihilates changeups to the tune of a .526 average with a .727 slugging percentage. He could see more sliders from Stripling but opponents are hitting .311 off the starter’s third offering.

This is a great matchup for Robert and the best market here is FanDuel’s at least two hits for +200, whereas other books have his over 1.5 hits as short as +145. If you can’t get his multi-hit market at +160 or longer, we’d suggest hitting his over 1.5 total bases for -120. 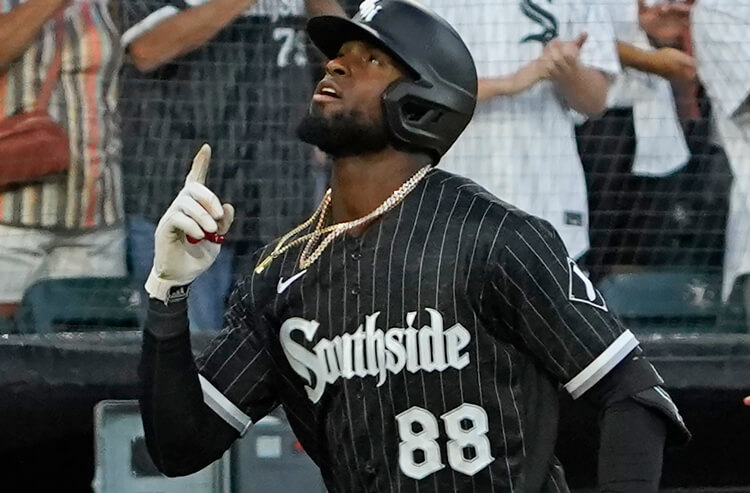 Blue Jays vs White Sox Picks and Predictions: South Side Rides as Home Dogs
Provided by