Astros vs A's Picks and Predictions: Oller No Match For Astros Lineup

The Houston Astros are absolutely rolling right now and will have the A's outmatched all across the diamond tonight. Expect them to get to Adam Oller early and often and never look back — as our MLB betting picks and predictions explain.

Houston came back from the All-Star break guns blazing, winning five straight contests. The Astros took two games at home from the Yankees to inch closer toward MLB’s best record before sweeping the Mariners on the road.

Since returning from break, Oakland split two games with the Tigers before taking two of three from the Rangers.

Will this one be as lopsided as expected? Check out our MLB picks and predictions for Astros vs. A's to find out.

Oakland opened as +188 underdogs at home. That line has widened, sitting between +190 and +195 at current depending on the book. The total has been set at 8 across all books.

Jake Odorizzi (4-2, 3.56 ERA): Odorizzi has been a solid option in the rotation for the Astros, posting his best ERA since 2019. His 4.21 xERA does indicate some minor regression could be coming. He pitches to contact, evidenced by a very low strikeout rate (18.3%), but he’s been able to avoid hard contact (4.1% barrel rate). He was on a hot steak before the All-Star break, allowing no earned runs in three of his last four starts.

The Over is 8-2 in the Astros’ last 10 games vs. right-handed starters.  Find more MLB betting trends for Astros vs. A's

Astros vs A's picks and predictions

There is no way in good faith that I can recommend backing the second-worst team in MLB with a pitcher like Adam Oller on the mound.

Oller has amassed an 8.56 ERA, 6.43 xERA, and 7.92 FIP across 10 appearances this season. Those numbers simply aren’t going to cut it, especially not when facing a lineup as dangerous as the Astros’.

Houston has been hot for a while now, and they’ve shown no rust since coming back from the All-Star break by compiling five straight wins. This is a team hunting for the World Series and they’ve shown little weakness of late.

The Astros are 13-3 in their last 16 games against right-handed starters and get a very favorable matchup against Oller on Monday. They’ve had no trouble going into Oakland and grabbing a victory, winning five of their last six road games against the Athletics.

The A's haven’t been a Monday team, winning just one of their last six such games. They also haven’t performed well against winning teams (as one would expect), going just 3-11 in their last 14 games against teams with a winning percentage above .600%.

This is a lopsided matchup for a reason. The Astros have the advantage in every aspect of the game and simply need to take care of business in order to grab the win.

Oakland hasn’t given up and has won three of five since returning from break, but they’re badly outgunned in this matchup and it’s a game Houston should take with relative ease if the team plays up to its standard.

I’m looking for the Astros to make it six straight wins since returning from the All-Star break.

The Astros have been pummeling the ball, ranking fourth in OPS, sixth in wOBA, and fifth in wRC+ since the calendar flipped to July.

It’s uncertain if slugger Yordan Alvarez will play Monday after sitting out yesterday’s game with soreness in his right hand. That’s an important name to monitor up until game time as Alvarez is one of the best bats in baseball.

Either way, this is a total Houston could approach by themselves when you look at the numbers. Oller’s ERA is closer to double-digits than it is to a respectable number, and his WHIP is dangerously close to 2.00. He’s walking more batters than he is striking them out, which is something you don’t see often.

He’s made only 10 appearances and there’s definitely room for improvement, but I don’t see anything positive about his profile and that could be a huge concern against this Astros lineup.

Odorizzi has been solid but not spectacular with a 4.21 xERA. He faces an Oakland lineup that is in the bottom third of the league but isn’t putrid. In the month of July, the Athletics rank 25th in OPS, 25th in wOBA, and 23rd in wRC+. It’s reasonable to expect them to contribute to this total.

I’m on the Over side as this Astros lineup should do some serious damage.

I’m targeting the Astros in this spot. The moneyline price is fair and you’re still paying juice on the run line, so I’ll opt for the prop market to get a better price.

Houston’s team total in the first five innings is listed at 2.5. I prefer this number to the full-game team total (4.5) because there’s less juice and it narrows things down to the matchup against Oakland’s starting pitcher, Oller.

So far this season, Oller has some of the worst numbers that you can see at the MLB level as he hasn’t adjusted to the big leagues yet. He now faces a potent Houston lineup that should be able to plate runs early in this game. 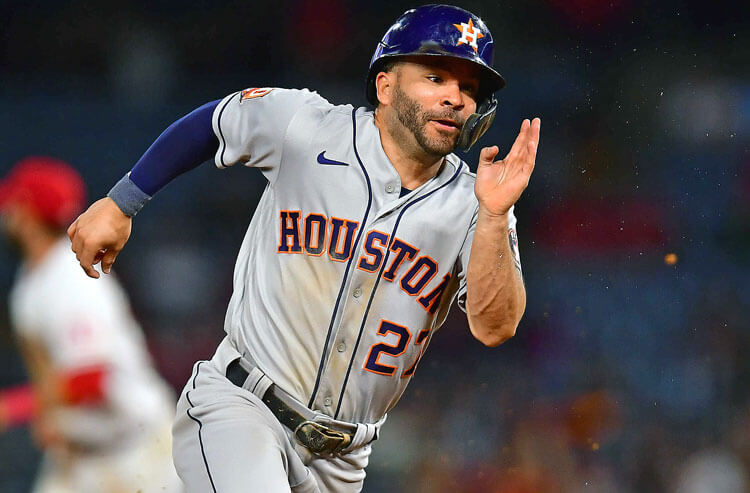 Astros vs A's Picks and Predictions: Oller No Match For Astros Lineup
Provided by