Those who dabble in betting the NFL preseason can be some of the smarter players that retail and online sportsbooks must deal with, and action on the tune-up games is increasing.

After last week's Hall of Fame Game, the NFL preseason kicks off in earnest tonight — and there may be more riding on it than you may think.

Sure, betting on the National Football League’s preseason isn’t for everyone. Starting players see only limited time on the field (if they play at all), and bettors have other summertime distractions, like getting outside and enjoying the weather.

Those who do dabble, however, can be some of the smarter players that retail and online sportsbooks must deal with, putting plenty of pressure on operators to do their homework. The search for an edge in these early games has both sides of the counter scouring social media, interview transcripts, and anything else available for crucial bits of information.

“There's a vague misperception of preseason football wagering,” said Jay Kornegay, executive vice president of operations at SuperBook Sports. “A lot of people believe it's for the degenerates, and it's absolutely not true. Preseason football is dominated by some of the sharpest minds out there.”

More of those minds are gaining access to some form of legal sports betting as well, as more and more U.S. states pass pro-wagering legislation. This forces bookmakers to keep their heads on a swivel, as they are taking more action than ever on the NFL preseason — and readying themselves for what may be a monster amount of regular-season wagering.

"There's more appetite now to bet on things like preseason that perhaps aren't as established and famous as other events going on, just because people are more comfortable with betting in general," said Jay Croucher, the head of trading at PointsBet.

PointsBet's online sportsbook is live in 10 states, including the biggest betting market in the country right now, New York.

Meanwhile, in addition to its flagship retail location at the Westgate Las Vegas Resort and Casino, SuperBook’s mobile app is now live in Arizona, Colorado, Nevada (not just Vegas), New Jersey, and Tennessee. The bookmaker also intends to launch soon in Iowa, with future debuts in Ohio and West Virginia on the horizon as well.

SuperBook's longtime presence in Las Vegas means it has long dealt with some of the sharpest sports bettors in the world. However, the spread of legal sports betting across the United States is bringing the bookmaker into contact with smarter players in new states, including during the NFL's three-week preseason.

When bets come in from certain players in Nevada, and now in SuperBook's other territories, the operator moves its lines "very aggressively" in response to those wagers, Kornegay said.

“So not too much has changed,” he added in an interview. “It's just that we have a bigger base of educated players.”

An edge to be had

The handle for NFL preseason betting has been rising, although that's probably true of about every sport, Kornegay said. But where the real value may lie for the books is in helping inform their databases of sharp bettors, as someone who gets a fair bit of money down at a really good preseason number may do so again during the regular season.

PointsBet's Croucher also pointed out that preseason bettors can come in both the professional and recreational variety, with the latter perhaps just looking for a way to make a game more interesting.

“There are sharps whenever there's a vulnerable market and the preseason is much more vulnerable than, say, Week 1 NFL lines,” he said. “There’s also … recreational bettors who have just been wanting to bet on the NFL and this is their opportunity to do so.”

Adam Chernoff, Covers’ senior content strategist, noted last week that bettors can benefit from uncertainty swirling around a betting market. That is true for both sharps and squares.

"Every bettor should bet preseason football because real edges can be found,” Chernoff said. “News and information dictate much of the line movement, and sportsbooks are forced to hang a number to the best of their knowledge before the news and info is all available.”

Looking to end a history of bad September play, we're banking on first-year head coach Brian Daboll to have New York ready to go in Foxborough against a Pats team that might not play Mac Jones.

It was the news flowing out of practice that helped flip the line for Thursday night's matchup between the New York Giants and New England Patriots.

The Pats opened as favorites of around two points, before chatter about who may or may not be playing (and in the case of New England, it sounds like many starters will have the night off) got the number moving.

“Giants are up to a 2.5 point favorite on Coach [Brian] Daboll’s comments that the starters will play for the Giants and the speculation that Patriots starters will not play,” FanDuel said in its notes to media on Thursday.

PointsBet's Croucher said it can be "no fun" setting lines on the preseason, as it's much easier to do so when bookmakers can better gauge the level of motivation amongst teams.

While it may be less complicated to set a line for a game involving the Carolina Panthers, who have Sam Darnold and Baker Mayfield fighting for the starting quarterback spot (and no player can move a line more than a quarterback, Croucher noted), divining how hard other teams will play can be tough.

The totals for NFL preseason games are considerably lower, too, as teams lack the sense of urgency and talent on the field that they would have in the regular season. Croucher also pointed out Thursday afternoon that no team was favored at that time by more than three-and-a-half points.

“And that just shows you that this is really … calculated guesswork on our part,” he said in an interview. “And we are skewing based on the information about who is going to be playing, and how many series, but for the most part we're kind of bringing these teams into the middle.”

More money is trying to take advantage of these fluid situations. For instance, the first preseason game, last Thursday’s Hall of Fame matchup, drew 21.8% more wagering at PointsBet than the previous year’s edition.

That kind of action has bookmakers bracing for a busy regular season, even in more mature betting states.

“The feeling just going into this football season feels like it’s going to be more popular than ever,” SuperBook’s Kornegay said. “I think that any state that was operating last football season, even Nevada, will have a significant increase this season. And that’s just how popular sports gaming is, and especially football.” 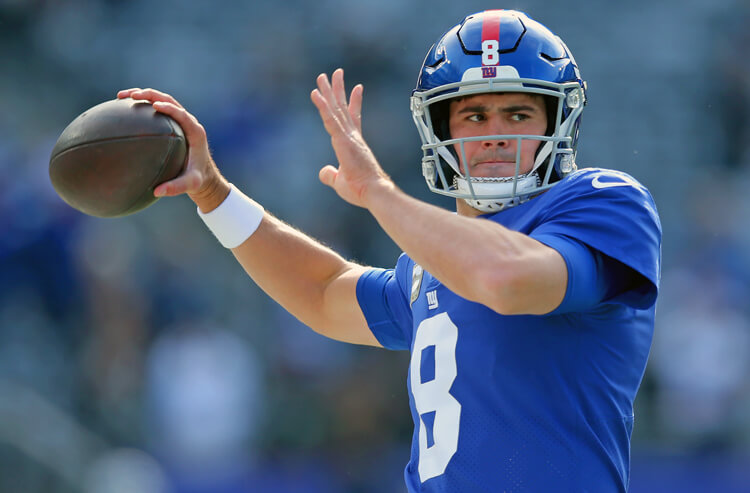