Massachusetts Sports Betting: Sportsbooks Get in Line for State Launch

So far, 11 operators have provided a notice of intent to occupy Massachusetts' 15 initial sports betting licenses. Not all the big names are on the list yet, but it's expected to be a competitive market... whenever the state goes live.

Eleven sportsbooks have submitted "Notices of Intent" with respect to obtaining operator licenses in the highly anticipated launch of sports betting in Massachusetts. Confirmation of those operators who have filed such preliminary documents were made yesterday by the Massachusetts Gaming Commission (MGC) on its official website.

Following Governor Charlie Baker's Aug. 10 signing of the last-minute compromise legislation giving the green light to legal sports betting in the state, the MGC began the process of reviewing over 200 regulations and setting out a procedural framework for sportsbook applicants. The companies which have thus far tossed their hat into the ring are as follows:

Major operators such as Boston-based DraftKings, WynnBET, and PointsBet have all gotten in line in advance of the licensing application phase. Interestingly, FanDuel, the country's leading mobile wagering sportsbook, was conspicuously absent from the list, as were Caesars Sportsbook, Barstool Sportsbook (PENN Entertainment), BetMGM (already partnered with MGM Springfield Casino), and BetRivers (Rush Street Interactive).

Most of those operators are expected to file notices of intent before next Wednesday's August 31 deadline, which was set by MGC Executive Director Karen Wells. That deadline, however, does not preclude sportsbooks from applying for licenses at a later date, since the MGC is still in the process of laying out a timetable for applications, the vetting of prospective licensees, and the public hearings that will be part of the approval process.

The MGC call for notices of intent was made in order to gauge the level of interest in gaming applications, largely with respect to the seven highly coveted stand-alone mobile licenses — which will be subject to a competitive bidding process. And with eight books already serving notice of their intent to apply and at least another five operators sure to follow, a fierce battle is shaping up.

Two sure bets in the license race

DraftKings: With reported earnings of $1.3 billion in 2021, DraftKings ranks second only to FanDuel (according to figures reported by Eilers & Krejcik) in overall U.S. gross gaming revenue, with 20.2% of the national total, compared to its rival's 46.6% share.

By far the largest player to have submitted a Notice of Intent thus far, DraftKings has already signaled that it will be making a major push to capture a majority market share once it is able to launch in its home turf, as the operator has the highest brand visibility among Boston-area residents. It also has a nationwide track record of being vetted and licensed across the U.S. — including preliminary approval in Maryland yesterday — that will speed its license approval application in Massachusetts.

DraftKings CEO Jason Robins has made it clear several times in recent months that he does not intend to relax his company's aggressive advertising and promotional spending patterns, specifically when it comes to Massachusetts and the three other states in various stages of rollout: Kansas, Maryland, and Ohio.

However, the maturation of the online sports betting market in the U.S. will see customer acquisition costs decrease and per-player revenue go up, especially with the increasing percentage of parlay wagering — and the operator profitability that comes with it.

WynnBET: The Vegas-based sportsbook is the sports betting brand of Wynn Resorts — and the parent company of Encore Boston Harbor casino, the largest (and newest) retail operation in Massachusetts that opened in 2019. This existing affiliation will likely accelerate WynnBet's approval process, given the MGC's familiarity with its parent company and existing hotel and casino operations.

Unlike DK's free-spending Robins, however, Craig Billings, CEO of Wynn Resorts, has cautioned that his company won’t be hitting previously high levels of spending on marketing its digital business. He has already reoriented his digital sportsbook in a more "shareholder-friendly" direction that involves burning less cash in trying to acquire customers.

Previously, Wynn had called in the likes of actor Ben Affleck and others as it threw around millions to promote WynnBET.

Billings is hopeful that the legalization of sports betting in Massachusetts will be a “significant catalyst” for WynnBET.  But should the MGC decide to allow for retail books to go ahead and launch ahead of the online books, it may be the brick-and-mortar side of Wynn's business that gets the first pick-me-up — and possibly sooner rather than later, according to its chief executive.

While WynnBET intends to go live with sports betting in Massachusetts at the earliest opportunity, it is not expected to engage in blanket advertising.

"That burn could go up modestly with the launch of Massachusetts because we will do some user acquisition," Billings said. "I don't think we'll ever be back in the position that we were in at the launch of last NFL season."

Neither WynnBET nor any of its rival sportsbooks will have to worry about Massachusetts ad spending this year, however: the MGC has, so far, stood out among this year's state regulatory commissions as one of the most deliberative.

Early in August, MGC Commissioner Bradford Hill, a former Massachusetts House representative, went out of his way to dispel any hope of a speedy rollout.

"I want the public to understand, as we as commissioners are starting to understand, that this isn’t something that’s going to happen overnight," Hill said. "I’ve seen some quotes in the newspaper from the public and others that they hope to have this thing up and running in a very, very short amount of time.

"And I just want the public to be clear, at least from my view — I’m not speaking for the whole commission — but from my point of view, this is going to take a little longer than people probably anticipate. And I’m OK with that."

Over the course of several meetings held this month, MGC Chair Cathy Judd-Stein seemed to be deliberately slow-walking the deliberative process. Meanwhile, Jaclyn Knecht, executive assistant to Judd-Stein, advised the commissioners that it could take "three to six months" for the regulatory, vetting, and licensing process to be completed. And subsequent MGC meetings have reinforced the view that even a late 2022 rollout (to cash in on the upcoming NFL season) may be out of the question. 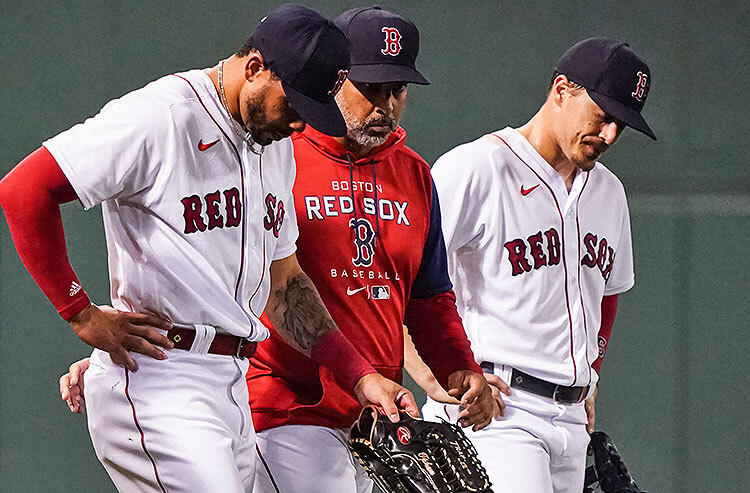 Massachusetts Sports Betting: Sportsbooks Get in Line for State Launch
Provided by