Horse racing bettors looking to increase their winnings can parlay placements to pick the Top 2, 3, and 4 finishers in the field. Find out the best angles for Kentucky Derby trifecta, superfecta, and exacta picks — including White Abarrio.

The 148th Kentucky Derby runs Saturday evening, and the first leg of the Triple Crown is always a hotly-anticipated occasion for horse racing bettors.

For those interested in more elaborate wagers than the outright winner, there are plenty of options that can yield a much bigger payday.

You can check out the full field's prices for the main event in our Kentucky Derby odds.

It’s a great feeling to be able to pick the winner of the Kentucky Derby, but those settling for simple win betting are leaving the chance for a big payday behind.

The average $2 exacta payout over the last 10 editions of the “most exciting two minutes in sports” is a staggering $569.10. Even if you exclude the 2019 exacta payout of $3,009.60 that featured longshot winner Country House on top, the average exacta over the other nine runnings in that span was a healthy $298.00.

Hitting the Derby trifecta or superfecta can set a horseplayer up for multiple months, or even until the next Run for the Roses, depending on the outcome. Here is our wagering advice for each of these three popular Kentucky Derby bets.

The exacta requires the bettor to select the Top 2 finishers of a race in exact order. The minimum wager is usually $1, but at Churchill Downs, the $1 straight exacta is not allowed. Only $1 part-wheels (e.g. 1/2,3) or boxes (where the bettor’s horses can finish first and second in any order, albeit at an increased cost) are permitted.

The first step in figuring out an exacta strategy for the Kentucky Derby is determining which horses can win the race. No. 12 Taiba (12/1) and No. 15 White Abarrio (10/1) look like the most likely runners to visit the Winner’s Circle on Saturday.

Though Taiba has just two starts under his belt, both were incredibly fast. He toyed with maiden special weights on debut, then beat the well-respected Messier fair and square in the Grade I Santa Anita Derby while drawing away. He’ll have two-time former Kentucky Derby-winning jockey Mike Smith in the irons.

White Abarrio was an impressive winner of both the Grade III Holy Bull and the Grade I Florida Derby at Gulfstream Park earlier this year. Among the Kentucky Derby-winning hopefuls he beat in those heats are No. 8 Charge It (20/1), No. 9 Tiz the Bomb (30/1), No. 13 Simplification (20/1) and No. 17 Classic Causeway (30/1). The Florida Derby typically draws quality entrants and has been a key prep race in recent years, as it has produced five of the last 15 Kentucky Derby winners (Barbaro, Big Brown, Orb, Nyquist, and Always Dreaming). The fact that White Abarrio has proven best among this group is a powerful argument for him.

We’ll box Taiba and White Abarrio in the exacta as our primary wager, but in the event one of them misfires, we’ll use some backups underneath in a separate bet.

No. 1 Mo Donegal (10/1) drew the dreaded rail post, but his past performances suggest he is not without hope in the Kentucky Derby. The Todd Pletcher trainee seems to run better the longer he goes – as evidenced by his career-best Grade II Wood Memorial score last time out – and has Eclipse Award-winning rider Irad Ortiz Jr. in the irons.

No. 3 Epicenter (7/2) has the co-best last-out Beyer Speed Figure in the field (102, tied with Taiba), earned when he drew off to win the Grade I Louisiana Derby under Joel Rosario, who retains the assignment.

Messier ran a big race in defeat in the Santa Anita Derby and should not be overlooked. He’s never missed the exacta in six career starts and has John Velazquez aboard.

Charge It broke his maiden in his second career start by 8 1/2 lengths, then ran a solid second in the Florida Derby despite giving ground on the far turn and drifting in toward the rail twice in the Gulfstream homestretch. The son of Tapit should handle the Derby distance and is training forwardly for Pletcher.

No. 10 Zandon (3/1, morning-line favorite) will be rolling late under Flavien Prat. Horse and rider teamed up at Keeneland last month to take the Grade I Blue Grass Stakes in dramatic fashion. It was the best race of his four-start career, and he has never failed to hit the board. The pedigree suggests he’ll appreciate the distance too.

The trifecta requires the bettor to pick the first three finishers of a race in exact order. The payoff can be substantially higher than the exacta, but the ticket cost and the risk factor increase significantly.

One benefit horseplayers have when it comes to the trifecta compared to the exacta or superfecta at Churchill Downs is the minimum wager, which in this case is 50 cents. That enables the bettor to include more combinations while keeping costs at a reasonable level.

No. 5 Smile Happy (20/1) has yet to miss the exacta in four career starts. He was no match for either Epicenter in the Louisiana Derby or Zandon in the Blue Grass Stakes, but the fact he ran second in both races with strong speed figures suggests that he could at least hit the board in the Run for the Roses. Smile Happy also has a win at Churchill under his belt, as he took the Grade II Kentucky Jockey Club Stakes here last November.

No. 13 Simplification (20/1) won the other two Gulfstream prep races for the Kentucky Derby, namely the Mucho Macho Man Stakes and the Grade II Fountain of Youth. Though he lost to White Abarrio in both their meetings this year, there’s no reason he can’t hit the board at a square price.

No. 19 Zozos (20/1) is one of the lighter-seasoned horses in the Derby field, having made his debut on Jan. 23 and raced only three times to date. He won his first two heats – the latter by over 10 lengths – before settling for second in the Louisiana Derby to Epicenter. He could improve and hit the ticket at a nice price.

The superfecta requires the bettors to select the Top 4 finishers of a race in exact order. While the minimum at most tracks – and most days at Churchill – is just 10 cents, the Derby Day superfecta minimum at the Louisville oval is $1. That makes constructing an affordable ticket that much more difficult, but it also increases the chances for a huge mutuel.

To keep costs down, we’ll rely on Taiba and White Abarrio to round out the top two positions in our superfecta play. Mo Donegal, Epicenter, Messier, Charge It, and Zandon will all be used for third, then we’ll lump in that quintet plus Smile Happy, Simplification, and Zozos in the fourth spot.

Yes. There are a number of legal and authentic online racing books, which allow you to withdraw funds directly to your bank account.

The lowest Win bet you can make is for $2. For the exotics, depending on where you play, many offer a 0.10 Superfecta wager at some betting locations.

You can bet on the upcoming Kentucky Derby as early as the day after the prior year's Derby. As the Kentucky Derby is limited to three-year-olds only, the early favorites are the horses having standout two-year-old campaigns.

You can place your wagers until the gates open. Once you hear, “and they're off" the window is officially closed. Soak up as much information in the post parade and loading the gate as you can. Knowledge is power.

With a Superfecta bet you are selecting the top four finishers in the race in order. 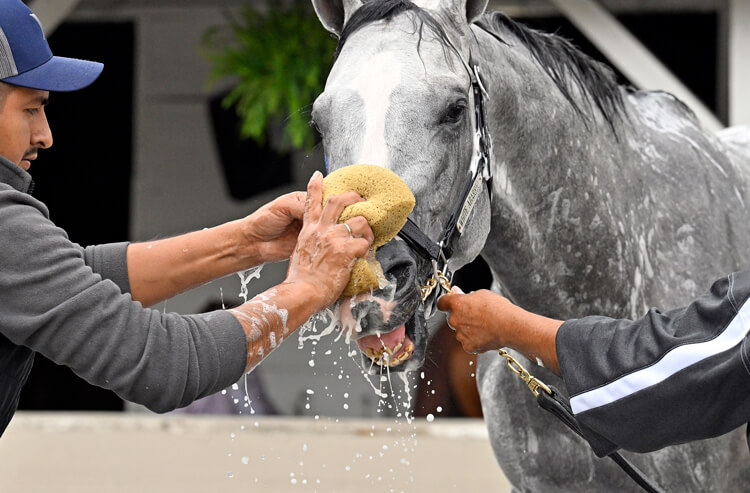