The Belmont Stakes, the oldest and longest jewel of the Triple Crown, is set for tonight at beautiful Belmont Park. A field of 10 is expected to compete in the 154th “Run for the Carnations,” going one lap around the mammoth 1 1/2-mile oval known as “Big Sandy.”

Though it won’t truly be “The Test of the Champion” in 2022 – as there is no Triple Crown on the line – the casual fan can get excited about the return of Rich Strike, the 80-1 longshot that shocked the world in the Kentucky Derby just five weeks ago. His camp bypassed the Preakness Stakes, citing the best interest of their horse, and trained up to the Belmont.

Whether there’s a Triple Crown at stake or not, the knowledgeable horseplayer knows that the Belmont always promises some solid wagering opportunities. So let’s dig into the 2022 Belmont Stakes odds and determine how bettors should play the exacta, trifecta, and superfecta on the field of horses running this year.

It’s a great feeling to be able to pick the winner of the Belmont Stakes, but those settling for simple win betting are leaving the chance for a big payday behind.

The average $2 exacta payout over the last 10 editions of the Kentucky Derby is a staggering $569.10. Even if you exclude the 2019 exacta payout of $3,009.60, which featured longshot winner Country House on top, the average exacta over the other nine runnings in that span was a healthy $298.00.

Hitting the Belmont trifecta or superfecta can set a horseplayer up for multiple months. Here is our wagering advice for each of these three popular Belmont Stakes bets.

The exacta requires the bettor to select the Top 2 finishers of a race in exact order. The minimum exacta wager at Belmont Park is $1. Bettors can also “box” an exacta, meaning the two (or more) selected horses on a ticket can finish in any order, albeit at an increased cost.

No. 6 Mo Donegal (5-2), who was last seen running fifth in the Kentucky Derby, will be our top selection. He won three of his first five starts before the Derby, including the Grade II Remsen Stakes at age two and the Grade II Wood Memorial in April.

Mo Donegal is by productive sire and multiple Grade I-winner Uncle Mo out of a Pulpit mare. Pulpit is noted for siring Tapit, who has produced four Belmont Stakes winners (Tonalist, Creator, Tapwrit, and Essential Quality) since 2014.

Trainer Todd Pletcher has won the Belmont Stakes three times, his first coming in 2007 with Kentucky Oaks champion Rags to Riches. Six years later, he would successfully wheel back Palace Malice in the Belmont after an off-the-board finish in the Kentucky Derby. Pletcher accomplished the feat again with Tapwrit in 2017.

Mo Donegal must be considered dangerous off the five-week vacation considering his conditioner’s prior triumphs in this race.

No. 1 We the People (2-1, morning-line favorite) took the local prep for the Belmont Stakes – the Grade III Peter Pan – by a staggering 10 1/4-lengths when last seen on May 14. The Peter Pan has traditionally been an essential prep for the “Run for the Carnations,” but the last horse to pull off that double was A.P. Indy in 1992.

We the People’s only losing effort in his four-start career came in the Grade I Arkansas Derby two races ago, when he was off slowly and never factored in a seventh-place finish at Oaklawn. In the Peter Pan, We the People was able to secure a comfortable lead on a good, sealed main track at Belmont. With some rain in the forecast, We the People could encounter similar conditions.

We the People is by Constitution, a dual Grade I winner routing on dirt who sired 2020 Belmont Stakes victor Tiz the Law. Constitution was sired by Tapit, whose recent influence on “The Test of the Champion” was noted by Mo Donegal.

These are the obvious win threats for the Belmont Stakes, so they’ll both be used on top in our exacta plays. We’ll also throw in No. 5 Creative Minister (6-1) underneath.

The rapidly rising son of Creative Cause last ran third in the Preakness Stakes on May 21 behind Early Voting and Epicenter, both of whom are bypassing the Belmont. Creative Minister had run only two weeks before that, easily dispatching allowance foes at Churchill Downs.

The trifecta tasks the bettor with determining the first three finishers of a race in exact order. The payoff can be much higher than the exacta, but both the ticket cost and the risk factor increase significantly, even with a minimum wager of 50 cents.

Mo Donegal, We the People, and Creative Minister will be the only three horses we’ll use in the trifecta as we look to protect our profit margin. It’s slightly tempting to throw in No. 4 Rich Strike (7-2), but no effort in his past performances prior to his stunning Kentucky Derby triumph suggests he is even a mild threat to contend in the Belmont.

No. 3 Nest (8-1) would move up if there were a scratch, but the lone filly in the race seems too slow on paper to hang with the boys in the Belmont.

Let’s emphasize our top two choices to finish either first or second in the trifecta, with some saver money on Creative Minister finishing in a higher position than third.

The superfecta is even harder to nail down than the trifecta, as it requires the bettor to pick the first four finishers of a race in exact order. Of course, the potential payday can be tremendous. The minimum wager is just 10 cents, making it a little easier to get involved.

Mo Donegal, We the People, and Creative Minister will once again be the horses we emphasize in the Top 3. Rather than get burned by a longshot for the fourth position, we’ll simply go “All” and use the rest of the field in the final spot in our superfecta wager.

The three horses we haven’t mentioned yet that have a case for fourth are No. 2 Skippylongstocking (20-1), No. 7 Golden Glider (20-1), and No. 8 Barber Road (10-1). Skippylongstocking and Golden Glider don’t figure to be too far behind early, so either could hang around for a small share if the pace is slow. Barber Road was in the money in seven straight starts before settling for sixth in the Kentucky Derby.

The current favorites to win the Belmont Stakes is Mo Donegal. 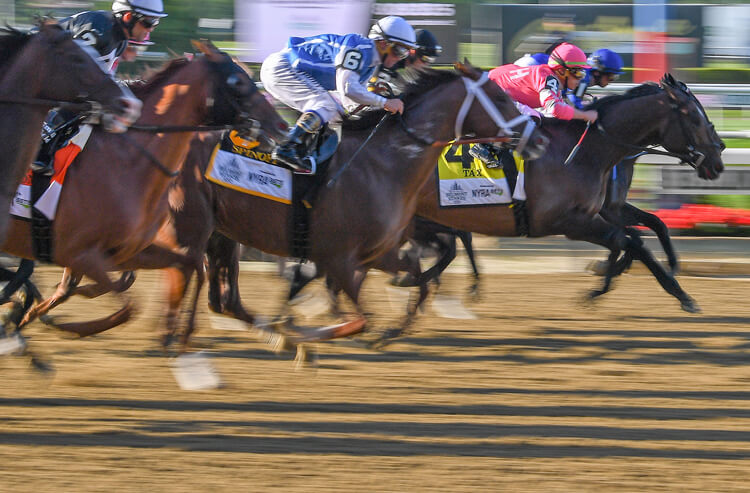