2022 Belmont Stakes Odds: We The People and Mo Donegal Favored Ahead of Saturday

Get the latest odds following the post position draw on the eight horses running at Belmont Park.

Belmont Stakes odds are live as horse racing betting turns its eye to the final leg of 2022's Triple Crown.

We'll be bringing you the latest odds for "The Test of the Champion," right up until the 154th running of the Belmont Stakes, Saturday, June 11 at Belmont Park.

Odds to win the Belmont Stakes

The Belmont Stakes – the third and final jewel of the Triple Crown – will be renewed for the 154th time at Belmont Park on Saturday, June 11.

Though there is no Triple Crown on the line in 2022, Kentucky Derby winner Rich Strike will make his long-awaited return to the races in this spot.

The 80-1 winner of the “Run for the Roses” has not scared off many though, as a big field of horses is expected to line up in the starting gate for the 1 1/2-mile race commonly referred to as “The Test of the Champion.”

Let’s look at some of the principal contenders for the 2022 Belmont Stakes.

Mo Donegal is expected to be the post-time favorite for the 154th Belmont Stakes. He was last seen running fifth in the Kentucky Derby, overcoming a slow start from his rail draw with a solid rally.

Mo Donegal won three of his first five starts before the Derby, including the Grade II Remsen Stakes at age two and the Grade II Wood Memorial in April. He is by productive sire and multiple Grade I-winner Uncle Mo out of a Pulpit mare. Pulpit is noted for siring Tapit, who has produced four Belmont Stakes winners (Tonalist, Creator, Tapwrit, and Essential Quality) since 2014.

Trainer Todd Pletcher has won the Belmont Stakes three times, his first coming in 2007 with Kentucky Oaks champion Rags to Riches. Six years later, he would successfully wheel back Palace Malice in the Belmont after an off-the-board finish in the Kentucky Derby. Pletcher accomplished the feat again with Tapwrit in 2017. Mo Donegal must be considered dangerous off the five-week vacation considering his conditioner’s prior triumphs in this race.

We the People took the local prep for the Belmont Stakes – the Grade III Peter Pan – by a staggering 10 1/4-lengths when last seen on May 14. The Peter Pan has traditionally been an essential prep for the “Run for the Carnations.” Still, the last horse to pull off that double was A.P. Indy in 1992.

We the People’s only losing effort in his four-start career came in the Grade I Arkansas Derby two races ago, when he was off slowly and never factored in a seventh-place finish at Oaklawn. In the Peter Pan, We the People was able to secure a comfortable lead on a good, sealed main track at Belmont, and he may not get those conditions again on June 11.

However, We the People is bred to be a champion. He’s by Constitution, a dual Grade I winner routing on dirt who sired 2020 Belmont Stakes victor Tiz the Law. Constitution was sired by Tapit, whose recent influence on “The Test of the Champion” as noted above.

Rich Strike will almost certainly take money in the Belmont Stakes on name recognition, with plenty of amateur bettors anticipating lightning striking twice. At a fraction of the price he was in the Derby five weeks ago, Rich Strike is one horse that smart handicappers should try to avoid.

Though his underdog story could make for an entertaining movie, bettors should remember that he was 80-1 in the “Run for the Roses” for a reason. He barely squeaked into the 20-horse Derby field, and no effort of his before the first Saturday in May stamped him as even a remote possibility to win the prestigious heat.

Rich Strike is by unproven sire Keen Ice, most noted for upsetting American Pharoah in the Grade I Travers Stakes at Saratoga in 2015. Keen Ice was a well-beaten third in the Belmont that year. That would seem to be Rich Strike’s ceiling.

Though he wouldn’t blow up the toteboard if he won, Creative Minister doesn’t figure to be much lower than 8-1, and has just as good a chance as the top three at taking the Belmont Stakes.

The rapidly rising son of Creative Cause las ran third in the Preakness Stakes on May 21 behind Early Voting and Epicenter, both of whom are bypassing the Belmont. Creative Minister had run only two weeks before that, easily dispatching allowance foes at Churchill Downs.

Trainer Ken McPeek has a prior Belmont win under his belt with longshot Sarava in 2002. He also won the Preakness in 2020 with filly Swiss Skydiver.

Odds of past Belmont Stakes winners

Here are the winners of the Belmont Stakes since 2000, including their post positions and final odds.

How to bet on the Belmont Stakes

Horse racing bets usually fall under two categories: straight and exotic. A straight winner is focused on the performance of a single horse and you make picks for win, place or show. While exotic bets require picking how multiple horses finish the race and you make picks on the exacta, trifecta and superfecta.

The most common way to wager horse racing odds is to pick a straight winner. Which is exactly what it sounds like, you pick the winner of the race. Other straight betting options are to bet a horse to place (to finish first or second) and to show (to finish first, second or third).

How to read Belmont Stakes odds

Horse racing odds are often displayed as fractions, which makes for simple math: divide one number by another and then take that sum and multiply it by your bet amount. For example, the favorite of a given race could be 3/1. The means a one dollar wager would return three dollars.

In some instances, a heavily favored horse could have odds of 5/4. Which means you would need to wager five dollars to win four.

It is also common to see Belmont Stakes odds displayed in decimal style, especially when the fractions get more complicated as you get closer to the race. In that case you simply multiply your bet by the number given. If you don’t like how odds are displayed at your sportsbook use our odds converter tool to switch to American, fractional or decimal style odds.

Following the race, we will post the final results as well as each horse's closing odds and payouts.

Mo Donegal is favored to win the Belmont Stakes in 2022.

Take a look at the top horse racing betting sites available in your area.

The 2022 Belmont Stakes will feature some of the top three-year-old talent in horse racing, such as Mo Donegal, We The People and Kentucky Derby winner Rich Strike. 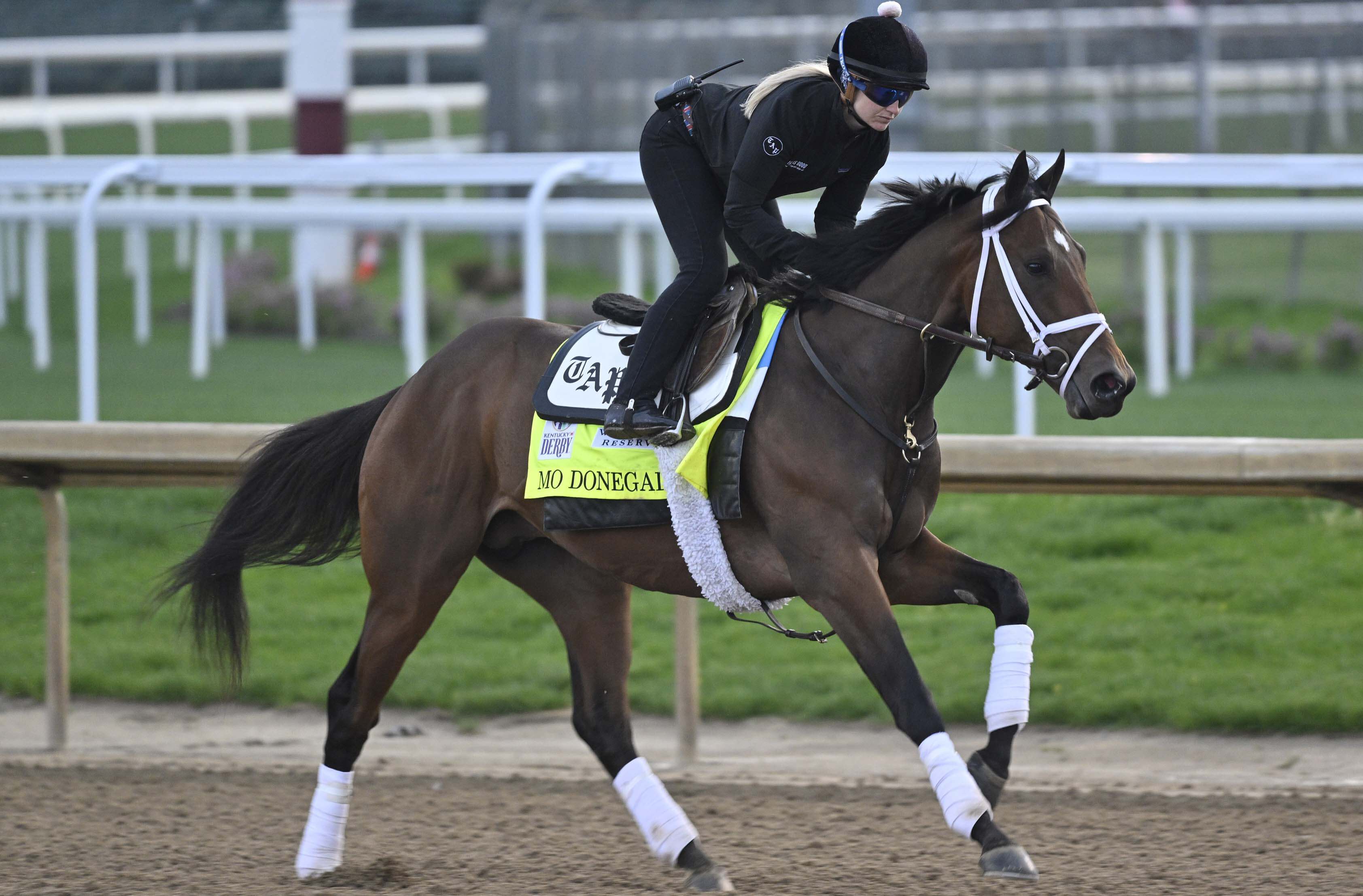 2022 Belmont Stakes Odds: We The People and Mo Donegal Favored Ahead of Saturday
Provided by