The 2021 Masters is back to its rightful spring schedule after being pushed to November last year, returning its status as the first major event of the PGA Tour season. And because of that prowess and prestige, it’s also the most heavily bet tournament of the year.

Sportsbooks roll out a long list of Masters odds to meet that demand, from outright winners to matchups to player and tournament props. We love it all, diving into the Masters field for the best value bets and live long shots.

These are our favorite 2021 Masters picks and predictions as we head toward tee-off tomorrow morning. Check back each day for more of our best golf bets for Augusta National and watch for round-by-round picks as the tournament unfolds. Good luck!

This season, Cantlay won the ZOZO Championship in October, placed second in the split-course American Express in January, and third in the AT&T Pebble Beach Pro-Am in February. And while he missed the cut at the PLAYERS Championship, he showed some clutch putting in last week’s WGC-Dell Technologies Match Play before bowing out in the third round. He’s Top 50 in strokes gained putting, as well as approach, and is sixth in strokes gained around the green—all vital metrics for the Masters.

Finau sits just outside of the overall favorites to win the 2021 Masters, with his outright price between +2,500 and +3,000—which could change depending on his performance in the Valero Texas Open. Expectations are high heading into Augusta with Finau playing fantastic in 2021, posting five Top-10 finishes in a dozen events, including two runner-up placings at the Farmers Insurance Open and Genesis Invitational.

Heading into the Valero Texas Open, the Utah native is a great combo of tee-box pop and approach precision, ranking 37th in average driving distance and 11th in SG: Approach. His putting, while not elite, isn’t terrible either. Finau finished T38 in the November Masters thanks to a second-round 75 but fired a 71 and 72 on the weekend to slide inside the Top 40. He posted efforts of T5 and T10 at Augusta in 2019 and 2018, respectively.

After a bumpy January which saw Smith post finishes of 24th and 62nd, in addition to a missed cut at the Farmers Insurance Open, he’s been strong heading into the Masters. He finished fourth in the Genesis Invitational, 11th at the WGC-Workday Championship, and 17th at the PLAYERS Championship, including a Round 3 score of 65.

I know what you're thinking: How can I recommend a player who has never broken 70 at Augusta National? This is a case where the talent trumps previous course history. Hatton is one of the best all-around golfers in the world, and has been for a while now—he comes into the Masters ranked eighth in SG: Approach (.773), 19th in SG: Off-the-Tee (.490) and 19th in SG: Total (1.303).

Hatton is also one of the top finishers in golf, boasting the lowest fourth-round scoring average on Tour (67.83) of any player with a minimum of five rounds played. He'll also be suitably motivated, having missed the cut at all three majors in 2020. You'll have to swallow hard here given his spotty history at Augusta, but if you're looking for a pure talent play, Hatton's your chap.

Here's a guy that deserves a second chance. Ancer, as you might recall, was tied for second after 54 holes at last year's Masters before stumbling to a final-round 76 and a disappointing T13. Little did he know at the time, but that performance would kick off a stretch of nine Top-25 finishes in 11 tournaments heading into his return to Augusta National.

Look for the talented Mexican to put it all together this time around, having tamed one of golf's toughest tests in three of his four rounds last time out. His combination of elite driving accuracy and high greens in regulation percentage put him in position to rack up birdies, and will serve him well in a tournament where struggles in either of those categories will lead to dismal results.

There isn't much to quibble over when you look at Reed's resume entering the Masters. A Green Jacket in 2018. A T10 result at the previous Masters tournament. Seven Top-10 results in 10 tournaments this season. The No. 2 birdie average (4.84 per round) on the PGA Tour. If you're going to beat Reed head-to-head, you're going to need to bring your top game to Augusta.

Morikawa is certainly capable of winning this matchup: He captured the PGA Championship last year and ranks third in birdie average (4.69) for the season. He's also inconsistent (just three Top 10s in 11 tournaments this season) and has little experience at Augusta, finishing T44 in his first visit in 2020. Reed is the much safer play of the two this weekend.

This pairing features two golfers who boast major resumes that casual golf bettors might find a bit surprising. Let's start with Kuchar, who has resurrected a moribund 2020-21 season with a third-place finish at the WGC-Match Play tournament and a T12 at the Valero Texas Open. Kuchar's best days are behind him, but he still arrives at Augusta with three career Top-5 finishes at the Masters.

Let's contrast that with Horschel's credentials. While his win at the WGC-Match Play event certainly helps build confidence, Horschel has one of the least-inspiring major histories of any notable player in the field, with exactly one Top-10 finish in 28 events. And in the immortal words of the Shark Tank billionaires, "For that reason, I'm out." Kuchar is the superior option here.

Much will be made over Spieth's incredible run heading into the Masters. Fresh off a win at TPC San Antonio, Spieth has four Top-4 finishes in his past seven events and appears to have rediscovered the form that made him one of the most popular outright betting options in any major championship. That's great for Spieth – but we're still not taking him in this matchup.

Spieth's recent form has compelled oddsmakers to make him the favorite here, but bettors can't overlook the fact that Rahm has been doing this for longer – and at tougher venues. He has finished in the Top-7 in seven of his last nine tournaments, including at T7 at the previous Masters (where Spieth finished T46). He also had a T23 at the previous U.S. Open, where Spieth missed the cut.

Let's get contrarian! Anytime you're getting +140 on a golfer as awesome as McIlroy, you should at least consider it. And while Rory's Masters resume isn't nearly as colorful as the rest of the majors – as in, it's the only one he hasn't won – it's not like he has played poorly. His past seven finishes at Augusta: eighth, fourth, 10th, seventh, fifth, 21st and fifth.

Yes, DJ trounced the field last year. And yes, he now has four Top-6 finishes in his last five appearances at the Masters. Still, you're getting +140 on a guy who has finished outside the top EIGHT just twice in the past seven Masters tournaments. There's tremendous value here, regardless of how dominant you think Johnson will be in this year's event.

The way to conquer Augusta National is the same every year (and any season): players will need to be accurate with their approach shots and excel at the short game. Players have no hope of contending if they can't hold the greens, and that task is never more challenging than it is at Augusta, where ruthless greens spit approach shots onto challenging run-off areas.

And those shots just off the green are no gimmes, either: These greens run as fast as any on tour. SG: Approach and SG: Around the Green are the most critical stats of the week, as is SG: Putting—long bombs off the tee won't help players much if they can't convert their shots afterward. 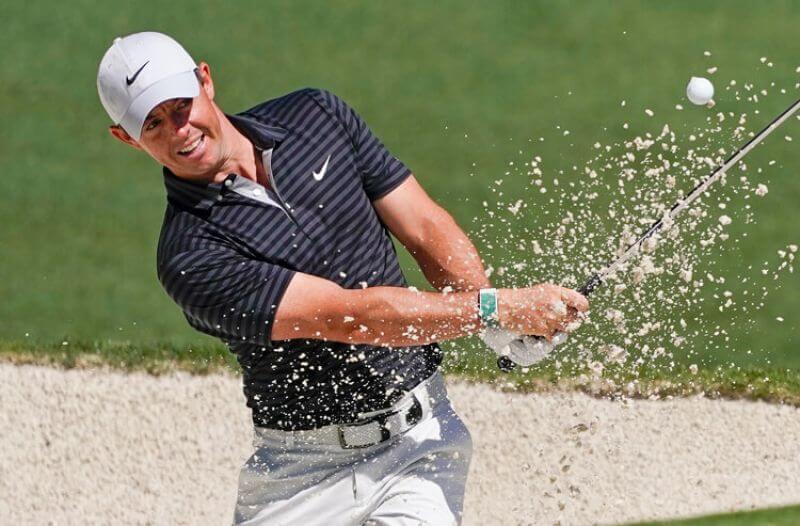 Masters 2021 Picks and Predictions: Riding with Rory
Provided by