When it comes to betting on golf, sportsbooks pull out all the stops for the Masters. The first major tournament of the PGA Tour season is also its biggest and oddsmakers roll out a long list of Masters prop bets to feed that massive audience and give you multiple ways to wager on the Masters.

With less than 24 hours to go before the 2021 Masters tees off, prop odds are starting to hit the board at online sportsbooks. Here are some of the prop markets currently available, complete with our favorite picks so far.

Will there be a hole-in-one?

Sportsbooks will set cutline props for most of the big-name golfers in the Masters field, allowing you to bet on whether individual players will make the weekend cut after the first two rounds. These Masters props are offered in a Yes/No format with a moneyline price assigned to each option.

You can also bet on what the cut line will be for the 36-round cut after Round 2, with oddsmakers setting an Over/Under on the two-round score. The 2019 Masters had an Over/Under of 147.5 as the projected cut line and finished with an official cut line of 147, meaning the Under hit.

Augusta National sees repeat success from players year after year. To quote a slogan from a famous Halifax beer (home to Covers HQ), “those who like it, like it a lot.” And those golfers didn’t have to wait long to get back on the famed course, with a mere 144 days between the pandemic-displaced 2020 Masters and the 2021 event.

The playoff prop is another Yes/No option, allowing you to bet on whether the Masters will be decided in a playoff. A playoff has been needed in 17 of 84 Masters tournaments going back to 1934 with the most recent coming in 2017 when Sergio Garcia beat Justin Rose in the sudden-death format.

Playoff needed to determine the winner

You can bet on whether a golfer will break the course record at Augusta National during the Masters with this Yes/No prop. The current course record is a 9-under 63 which is held by Nick Price (Round 3 of the 1986 Masters) and Greg Norman (Round 1 of the 1996 Masters).

New Course Record of 62 or lower

Betting on the winning score of the Masters is a very popular prop bet, as it is not tied directly to the success of a particular player. Rather, it is an Over/Under wager in which the oddsmakers set a predicted final score for the Masters champion and you can wager on whether or not the winner will finish Over or Under this final score. The winning score of the 2020 Masters, which was played in November rather than May, was 268 (-20) through four rounds.

The Masters is an international affair with the best golfers from around the globe coming to Augusta National. Nationality props segment players from different countries and regions together and allow you to bet on which one will have the best finish of that group, such as betting on the top American golfer or top European.

If momentum is worth anything, Spieth pulls up to Augusta National like a freight train. He’s fresh off a tournament title at the Valero Texas Open this past weekend and after a rough start to the 2021 campaign, he’s placed fourth or better in four of his last sixth tournament events (with a 15th the Genesis Invitational and 48th at the PLAYERS). He’s playing some of the best golf on Tour right now with 17 of his 24 total rounds since February coming in at 70 or less.

Smith has had recent success at Augusta National, finishing T2 last November and T5 in 2018. He stayed sub-70 in all four rounds at the 2020 Masters and enters this week with eight Top-25 finishes in his dozen tournament events this PGA Tour season—three coming inside the Top 10.

The Aussie is fantastic on the green and ranks 16th in SG: Putting—a valuable metric on the tricky-quick dancefloors found in Georgia this time of the year. Countrymen Jason Day and Adam Scott aren’t as locked in heading into the 2021 Masters but demand enough respect at Augusta to up the price on Smith to +175. I like the near 2/1 return on the 27-year-old.

We often see the same players excel at Augusta National every year, with 48 players winning 84 of the total Masters titles since 1934, and you can bet on whether or not a first-time winner will be crowned champ with this Yes/No prop. Since 2015, five of the past six Green Jacket winners have been first-time Masters champions.

Will there be a First Time Winner?

Will anyone record an albatross?

An albatross (or a double eagle) is a score of three-under-par on a single hole (two shots on a Par 5 or hole-in-one on a Par 4). There have only been four albatrosses recorded in Masters history, with the last one coming from Louis Oosthuizen in 2012. Due to this rarity, the Masters' albatross prop pays out at high odds, with Yes set at +1,200 and No at -3,330 in 2020.

Albatross to be registered during The Masters

Oddsmakers continue to get more and more creative each year with their prop markets. Here are some of our favorites so far in 2021:

Balls in the water on Hole 12 during Round 4

Flagstick to be left in for the winner's final putt?

Most strokes recorded on any hole

Player to be disqualified?

Where can I bet on Masters props?

The Masters is the most popular golf event of the year for sports bettors. Most betting sites will offer Masters odds but the top sites are safe and secure, offer a wide range of banking options, and give you a ton of markets for each game. Check out our top golf betting sites in your region.

All golf tournaments have alternative wagers on the board, but books go big with Masters prop bets every spring. Not only can you wager on the odds to win the Masters and head-to-head matchups but also a laundry list of props and extra offerings.

Whether you’re betting on player odds or tournament markets, here are some tips for betting on Masters props.

When it comes to betting on Masters players props, the first place you should look for info is that player’s current form. Have a good look at their level of play entering the tournament and the different aspects of their game: driving, approach, and putting.

Take a look back at how they’ve performed at Augusta National in past Masters as well as other big major tournaments. Do they step up on the big stage of the Masters or crumble under the pressure of these elite events?

Weather can have a huge impact on players and overall tournament performance. Winds, rain, and cold temperatures can make the course play short while warmer weather can dry out the fairways and greens and have it playing fast and long. And don’t just look at that day’s forecast: check the weather heading into Round 1 and throughout the weekend.

Figure out how you see the Masters playing out and which players you want to bet on and against during the tournament. From there, set a narrative and bet accordingly. If you expect the course to play long, side with those players who hit big off the tee box and jump on their Over props. If you believe a notable golfer will struggle, go against them not just in matchups but his score props and round-by-round odds.

Betting on props for the Masters can be a fun and profitable way to add to your portfolio of wagers for the tournament.

When do Masters props get released?

Masters props are released on Monday or Tuesday of the week heading into Round 1 on Thursday.

When do Masters props pay out?

What Masters props can I bet on?

There are a number of Masters props you can bet on, including Over/Under on the winning score and the top American golfer for the tournament. 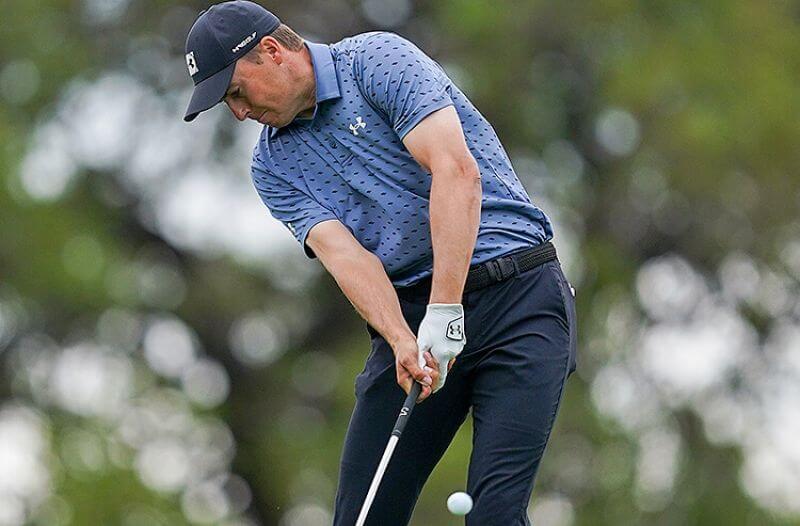 Masters Prop Bets 2021: Getting Value in Surging Spieth
Provided by