"Two for the Money" might not be the best movie out there, but Matthew McConaughey's portrayal of a star college football player turned sports handicapper is definitely entertaining.

COVID-19 cabin fever is getting to many of us, especially without sports betting to keep us entertained  - and to think that normally we would have MLB, NBA, NHL playoffs and the NCAA finals going on right now.

In between all my home workouts, snack binges, TV show marathons, and Tik Tok time wasting, I've been watching a lot of movies.

For those looking for some solace in this time of little sports betting action (table tennis doesn't quite do it for me), I've compiled a list of ten of my favorite sports betting movies. So sit back grab those snacks, and relive the anxiety of a big wager while watching some fictional degenerates put their life savings on the line.

Yes, pool and billiards are sports, and this movie might be the quintessential sports gambling movie of all time. Paul Newman plays the titular hustler, a pool shark who wants to defeat the legendary pool player Minnesota Fats (played by the legendary Jackie Gleason) and break into the big time. But, of course, needs to get over his own ego first.

This came out towards the end of the Golden Age of Hollywood and might come off as a bit cheesy and melodramatic at parts but is an absolute classic with some terrific performances.

Another classic movie that came out more than 40 years ago, James Caan plays the lead in this ugly charactor portrayal of a gambling addict. Caan plays a university professor named Axel Freed (pretty much the coolest name ever) who seemingly has it all; a successful well-paying job, a hot wife, and a supportive family.

But Freed also has a gambling addiction, and a psychopathic personality, which puts him in a crazy hole financially. One of his vices is betting on basketball which plays a big role in this movie. The ending is a bit shocking (and a bit ridiculous since there are no "sure winners" when it comes to gambling) but absolutely perfect.

The Colour of Money

The sequel to The Hustler might not be quite as good, but it's definitely more fun. This is peak Tom Cruise, aka Risky Business, Top Gun, Days of Thunder, Tom Cruise and boy is it hard to watch this movie without cracking a smile.

While The Hustler is dark and gritty, this is colorful, flashy and tailor-made for the 80s with the final showdown happening in Atlantic City. The chemistry between a young Cruise and the older Newman is fantastic. And with Martin Scorcese directing you know it's gonna have plenty of style as well.

This Adam Sandler flick that came out just last year, might be the best movie of the bunch. Sandler has come a long way from his Happy Gilmour and Waterboy days. That's right, Billy Madison is all grown up and he turned into a degenerate sports gambler with major family issues.

This movie is like watching an hour and a half of a panic attack, more stressful than a fourth-quarter bad beat, but somehow it manages to be entertaining as well. Featuring Kevin Garnett and The Weeknd playing themselves, this flick is a must match for sports betting fans.

This movie is based on the true story of the Chicago White Sox betting scandal of 1919. Instead of outright condemning the players who threw the World Series, this movie does a good job of showing how the environment they were in shaped their decision, including a greedy owner who ripped off his players.

Eight Men Out isn't just a morality tale about the dangers of fixing a game, it's about the problems that come with treating employees like crap and the dangers of an illegal gambling underworld instead of a regulated market.

This is an underrated flick, albeit with a predictably unhappy ending for the eight players implicated in the scandal. But if you want a feel-good ending to the story of "Shoeless" Joe Jackson you can always watch Field of Dreams with Kevin Costner and pretend it's the sequel.

If you're looking for a fun flick that seems to never get old, White Men Can't Jump is perfect brainless 90s fodder. Starring Wesley Snipes before he became an action star and Woody Harrelson when he still had hair, this movie has lots of trash talk, decent basketball action, playground hustling and a fashion sense that I'm dying to see make a comeback.

Look for cameos from a few basketball legends including Hall of Famer Gary Payton and the original point forward Marques Johnson.

A solid comedy based on the memoirs of Beth Raymer. This is the somewhat true story of Beth who used to work as a stripper before moving to Vegas. She starts placing bets on behalf of a big-time sports gambler named Dink (played by Bruce Willis) and takes to the new job eventually becoming a handicapper as well. This movie goes through twists and turns and has a fairly cliche climax with everything riding on one big bet, but hey it's a sports movie not a work of art.

Besides Willis you'll recognize most of the cast in this one, Raymer is played by Rebecca Hall, Catherine Zeta-Jones plays Dink's wife, Joshua Jackson (Charlie Conway!!) plays Beth's boyfriend and Vince Vaughn plays a big role as another bookie. The fact that Raymer really did experience some of the things portrayed in the movie adds an air of authenticity which is sorely lacking in movies about sports gambling. And it doesn't portray sports bettors as horrible human beings, yay!

This 1989 comedy starring Richard Dreyfuss is cheesy but entertaining. Unlike most sports betting movies which show the dangers of betting recklessly, this movie is a light-hearted look at the world of horse race betting and really captures the feel of a big winning bet.

Let's just say the winning streak in the movie is unlike anything you'll ever be on the receiving end of, but hey at least you can cathartically cheer for a working-class Joe hitting a lucky streak.

Two for the Money

Is this a good movie? Absolutely not. Is it a realistic look at the world of sports gambling? No, not really? Is it still entertaining? Hell yes! This movie may have been absolutely panned by critics (and for good reason), but as a sports bettor I get an absolute kick out of the performances of Matthew McConaughey and Al Pacino (with Rene Russo and Jeremy Piven in the cast as well).

Matthew McConaughey plays a former college football star who becomes a highly successful sports handicapper with Pacino's character as a mentor. Of course things are never quite that simple and things predictably end up going south.

OK, it might be a bit of stretch to consider this a sports betting movie. But sports betting does play a role in this flick, with the protagonist's father (played by Robert De Niro) a die-hard Eagles fan (before they won the Super Bowl) with a bit of a gambling problem. Damn, lots of the movies on this list sure do show the ugly side of sports gambling. Where are all the responsible sports bettors who understand the idea of money management and playing within their means? I'd like to think that they just don't make for good Hollywood drama.

This is a very entertaining rom-com (seriously it's a good movie) starring Bradley Cooper and Jennifer Lawrence. And it doesn't follow the tired formula and character types of most other movies in the genre. 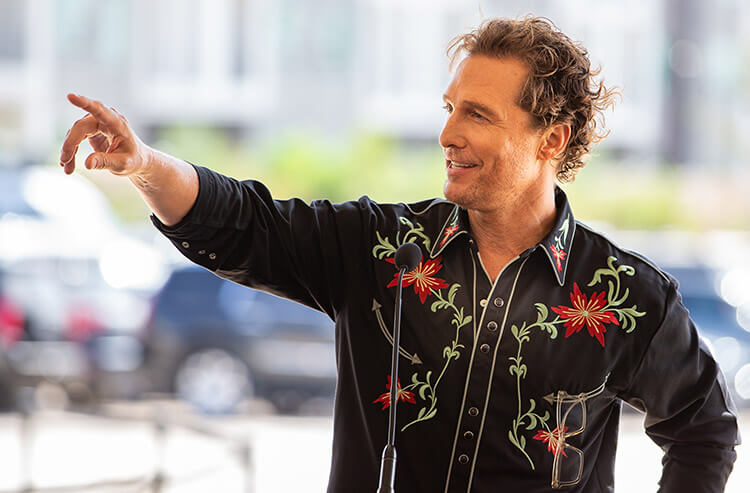