Nathan's Hot Dog Eating Contest Odds are out for the Fourth of July event that features massive betting favorite Joey Chestnut, who has won 14 of the last 15 years. On the women's side, Miki Sudo is heavily favored to win after missing last year. 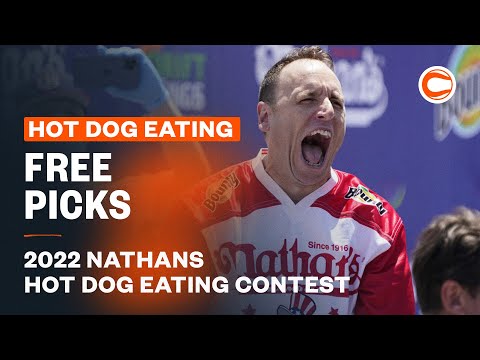 As we celebrate another Independence Day, we also celebrate one of the day's hungriest competitions — the Nathan's Hot Dog Eating Contest at Coney Island in New York.

This is the Super Bowl for competitive eating with the highest-ranked qualifiers from Major League Eating attempting to down as many hot dogs in buns as possible within 10 minutes. ESPN will air the contest, beginning at 10:30 a.m. ET with the women's event.

If you want to start off your Independence Day celebrations with some fun Nathan's Hot Dog Eating Contest betting, we've got you covered with the odds to wine — along with our picks and predictions.

Last year's event took place in front of thousands of cheering fans after spectators were not allowed during the 2020 pandemic year.

Once again, Joey Chestnut rose to the occasion, guzzling down 76 glizzies to capture his 14th title in 15 years. With 76, he beat his own record of 75, which was set just a year prior in 2020. On the women's side, Michelle Lesco pounded in 30.75 dogs to win the title, with Miki Sudo sitting out the competition in anticipation of her first-born child.

Chestnut is a -2,500 favorite once again, with last year's runner-up, Geoffrey Esper, installed at +700. If you want betting value with Chestnut you might want to consider prop bets, including the Over/Under of 74.5 on how many hot dogs he will put down.

While Chestnut is the overwhelming favorite on the men's side, seven-time champion Sudo is heavily favored to regain her title at -5,000, with her O/U weiner line set at 50.5. Michelle Lesco trails at +1,000 as she tries to defend her title. Another fun bet to look at is the head-to-head matchup between Sudo and last year's third-place finisher, Nick Wehry, with their O/U totals separated by just one succulent weenie.

Most years I've been a big fan of backing Joey Jaws on the spread (pun not intended) but oddsmakers seem reluctant to give him a handicap number this year since he routinely dummies his competition. Instead, we'll simply take the Over 74.5 on the number of dogs that Chestnut will consume.

However you feel about the sport of competitive eating, it's rare to see an athlete with the kind of self-motivation that Chestnut has. This guy is without question the GOAT and destroys his closest competitors by miles yet he refuses to rest on his laurels and keeps improving. It seems like a solid bet to expect him to match his total from two years ago when he appears so driven to break his own records.

First, let's get this out of the way; Nick Wehry is a beast. The 33-year-old is actually shredded, which makes him a bit of an anomaly in the competitive eating world. He's also engaged to Sudo, which gives him the ultimate training partner.

That said, breaking into the 50 hot dog club will be extremely tough, even with Wehry getting better every year. He ate 31 hot dogs in the 2018 finals, 36 in 2019, 39.5 in 2020, and 44 last year, but expecting a one-year improvement of six hot dogs seems a tad too ambitious. We're fading the big guy on this big number.

Previous winners of the Nathan's Hot Dog Eating Contest, since 2011 when women began competing separately, and how many hot dogs they consumed.