NFL CPOY betting odds shifted immensely this weekend after Cam Newton's signing with the New England Patriots. We bring you the updated NFL betting odds for the CPOY Award.

Who is the favorite to win the NFL Comeback Player of the Year award?

Pittsburgh Steelers' QB Ben Roethlisberger remains the NFL CPOY betting favorite at +300. Roethlisberger set franchise records for passing yards (5,129) and touchdowns (34) in 2018, but missed almost all of last year after suffering an elbow injury in Week 2.

Now second on the boards is Newton, the Patriots' replacement for Tom Brady (pending injuries). While Newton played in only two contests last season, he was NFL MVP in 2015, and could spark a resurgence in New England if healthy.

Rob Gronkowski tumbled down the board a bit, from second at +400, down to +800. Gronk missed the entire 2019 season after retiring following his Super Bowl LIII win with New England. He's reunited with Brady this offseason, following a trade to the Tampa Bay Buccaneers.

Elsewhere, still-unsigned receiver Antonio Brown saw his odds shoot up from +2,000 to +1,000, while embattled Chicago Bears QB Mitch Trubisky has surged from +10,000 to +5,000. Both moves are indicative of potential sharp action at the DraftKings books.

Who are some long shots who could win the NFL CPOY Award?

Baker Mayfield had a year to forget in 2019, but remember that he had a terrific debut season in 2018. With the Cleveland Browns adding tight end Austin Hooper and offensive tackles Jack Conklin and Jedrick Wills, Mayfield has no excuses this year and looks like a steal at +3,000.

If you're looking on the defensive side of the ball, Los Angeles Chargers' safety Derwin James is a solid value at +1,200. James was arguably the best safety in the NFL as a rookie in 2018 but missed most of last year with a stress fracture in his foot. He returned for the Bolts' final five games of the season and made a big impact.

• Over the last 18 years, the NFL CPOY Award has been handed out to quarterbacks on 12 occasions.

• Although Ryan Tannehill won the award last season after bouncing back from a poor 2018 season, in recent years the NFL CPOY Award has been handed out to players coming off significant injuries. Over a five year period from 2014 to 2018 every Comeback Player of the Year had suffered a season-ending injury during the previous year.

• Only one player has ever won this award more than once (Chad Pennington in 2006 and 2008). The players tied for fourth on the odds board (Gronkowski and Matthew Stafford) have previously won the award.

Who are previous NFL Comeback Player of the Year award winners?

How to bet on NFL awards odds?

Here are a few tips to keep in mind when wagering on NFL awards betting odds.

NFL awards odds will be adjusted by sportsbooks as the season goes on. In the preseason and the early weeks of the regular season, betting on dark horses can prove very profitable. As the season continues, expect to see odds tighten around the favorites. At that point, it becomes wise to focus on the players near the top of the odds board and betting big underdogs is unwise.

Live long shots can provide tremendous value. Look at younger players on the verge of breaking out, or guys that have already been playing at a high level but could take the next step now that they are in an ideal situation with a new team, coach or system. Other players that can give a great payout are established stars coming off under-performing seasons due to injuries or other factors.

When placing futures bets on individual awards, keep in mind that voters, not a scoreboard, are often the deciding factor. Voters can be influenced by a variety of factors, including media coverage and public opinion. Consider what the media narrative is for a particular season and which players they seem to be rooting for and against.

Historical trends, especially recent ones, can give you a good idea of which way voters tend to lean. For example, the NFL MVP has been handed out to a quarterback in 12 of the last 13 seasons. Identifying those trends is a good way to seperate the true contenders from the pretenders. 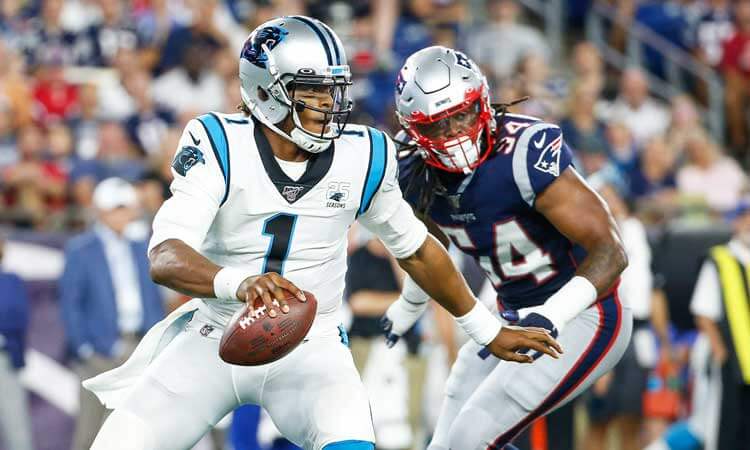 NFL Comeback Player of the Year odds: Cam Newton trending up
Provided by