Hamilton has won seven straight over Toronto, going 5-1-1 ATS in the process. But our CFL picks and predictions for the latest installment of this rivalry — on Canadian Thanksgiving — likes the Argos to cover as road 'dogs... and maybe even win outright.

The final game on the CFL betting board for Week 10 is a clash between the Toronto Argonauts and Hamilton Tiger-Cats on Monday afternoon.

The Argos already played earlier this week when they defeated the Reblacks on Wednesday and with a quick turnaround they are installed as 4.5-point road underdogs for this Canadian Thanksgiving rivalry game.

Here are our best free Argonauts vs. Tiger-Cats picks and predictions for October 11, with kickoff at 4:00 p.m. ET.

The Tiger-Cats are 9-1 to the Under in their last 10 games overall. Find more CFL betting trends for Argonauts vs. Tiger-Cats.

When these teams last met up on September 10, the Argos edged the Ti-Cats by a final score of 17-16 with Hamilton kicker Michael Domagala missing a game-tying extra-point attempt in the final minute. The Ti-Cats had won the previous seven games in the head-to-head, going 5-1-1 ATS during that span, so it was a crucial psychological victory for a Toronto team that has aspirations of winning the East.

The Ti-Cats are 4-4 SU (4-3-1 ATS) this season and are coming off an overtime loss at home to the Alouettes.

With a 5-3 record, the Argos have the best record in the division and have won back-to-back games, most recently a 35-16 victory on Wednesday against the Redblacks. Although the absurdity of the CFL scheduling gods is putting the Argos in a tough spot by giving them only four days off against the Ti-Cats — who are fresh off eight days of rest — there is reason to consider the away dogs.

The biggest reason: The ugly Ti-Cats offense, which ranks dead-last in the CFL with 261.4 yards per game and 3.8 yards per play. Hamilton had the league's top-rated offense in 2018 and 2019 but, despite keeping most of their team intact, they have struggled this year. While injuries played a role in the early going, I'm tired of making excuses for an offense that just can't get things going and hasn't been able to block up front.

The Argos have an excellent front four and should be able to put pressure on Hamilton quarterback Jeremiah Masoli. The Argos probably had the most impressive offseason of any team in the league, with a massive infusion of talent on both sides of the ball, and as the year goes on they are getting healthier and beginning to gel as a unit. Grab the Argos and the points.

The Ti-Cats have been pussycats on offense... But they've been showing their claws on defense, holding foes to 7.1 yards per pass attempt and 17.8 points per game — both good for second-best in the league behind the Grey Cup favorite Blue Bombers.

Hamilton has a ferocious front seven anchored by end Ja'Gared Davis, tackle Ted Laurent, and linebackers Jovan Santos-Knox and Simoni Lawrence. They should be able to limit an Argos offense that has run hot and cold this season and was held below 20 points in both meetings with Hamilton.

That said, the Ti-Cats will be hard-pressed to score themselves. Hamilton ranks dead-last in the league in passing yards per game (198.3), yards per pass attempt (6.5), and sacks allowed (27).

They won't be able to move the chains against a solid Toronto stop-unit which is led by a bunch of former NFL linemen including Shawn Oakman, Eli Harold, Shane Ray, and Kony Ealy (with the latter two only recently coming off the IL).

With an underachieving offense and elite defense, the Ti-Cats have been a terrific Under bet, going 9-1 to the Under in their last 10 games overall. 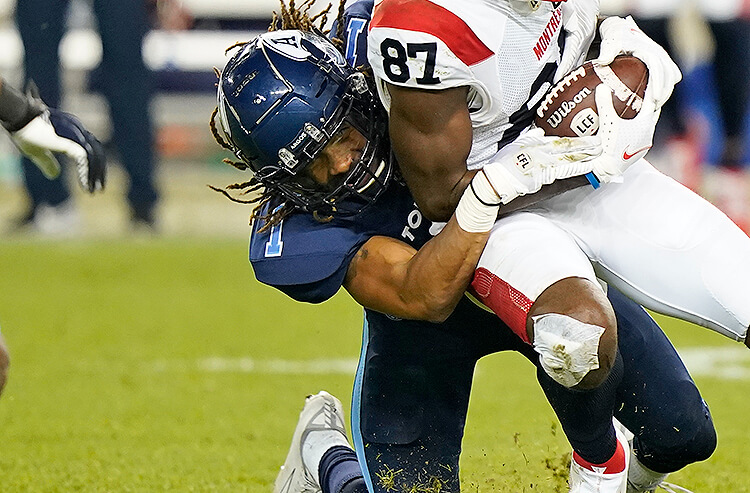