Islam Makhachev is rightfully the heavy favorite against Thiago Moises at the main event of UFC Fight Night on Saturday. But with his outright price way too juiced, we're getting creative with our UFC picks to find ways to profit off his expected win.

Islam Makhachev vs. Thiago Moises is the main event for UFC Fight Night betting on Saturday, July 17 at the UFC Apex in Las Vegas.

This should be a crossroads fight for a pair of young lightweights who both need a win against a ranked opponent to really justify moving up as contenders.

UFC betting lines opened with Makhachev installed as a whopping -750 favorite. Here are our best Makhachev vs. Moises picks and predictions for UFC Fight Night action on July 17.

Islam Makhachev is the No. 9-ranked lightweight contender and is on a seven-fight winning streak, most recently a submission victory over Drew Dober in March. Makhachev made his UFC debut in 2015 and is 8-1 in the octagon but he has never really gotten a signature fight.

Hailing from Dagestan, Makhachev trained for years with his close friend — and former UFC lightweight champ — Khabib Nurmagomedov. The 29-year-old is a terrific wrestler with ferocious ground-and-pound and strong submission skills.

Thiago Moises is No. 14 in the lightweight rankings and is coming off a unanimous decision victory over Alexander Hernandez in February. The 26-year-old is 4-2 in the UFC and is currently riding a three-fight winning streak.

With a black belt in Brazilian Jiu-jitsu, Moises is an excellent grappler and was the former lightweight champion in the Resurrection Fighting Alliance.

Makhachev vs Moises tale of the tape

PREDICTION: Islam Makhachev by points (+105) - Moises is on a winning streak but it's worth mentioning that his decision win against Bobby Green was razor-thin and he was getting pieced up by Michael Johnson before he pulled off a submission victory.

Makhachev's victories have been far more dominant and his ability to control his opponents with his wrestling, both offensively and defensively, is very impressive. When it comes to standing up, Makhachev is defensively much better than Moises and has more power in his shots.

That said, while we think Makhachev gets the win he has absolutely no value on the moneyline at -750. And considering that four of his last seven wins have come by decision — and Moises has never been finished in his career — we like this method to win prop at plus money.

PREDICTION: Thiago Moises by submission (+1,600) - While we think Makhachev will most likely get the win, Moises is being absolutely slept on at this price. The Brazilian has fantastic jiu-jitsu and has six career wins by submission.

Makhachev averages 3.46 takedowns per 15 minutes at an excellent takedown accuracy of 68 percent, and he will likely get this fight to the mat.

However, crazy things can sometimes happen when a fight goes to the ground and Moises is certainly crafty enough to pull off a sneaky sub. That's worth a sprinkle at +1,600.

PREDICTION: Will the fight go the distance? Yes (-118) - Five of Moises' last six fights have gone the distance and each of his four career losses have come by decision.

Likewise, during Makhachev's seven-fight winning streak, four of those bouts went to the judges' cards, while he won two by way of submission and one via KO/TKO. Although he is capable of knocking out Moises with ground and pound, a submission win seems unlikely. We think this fight will go the full 25 minutes. 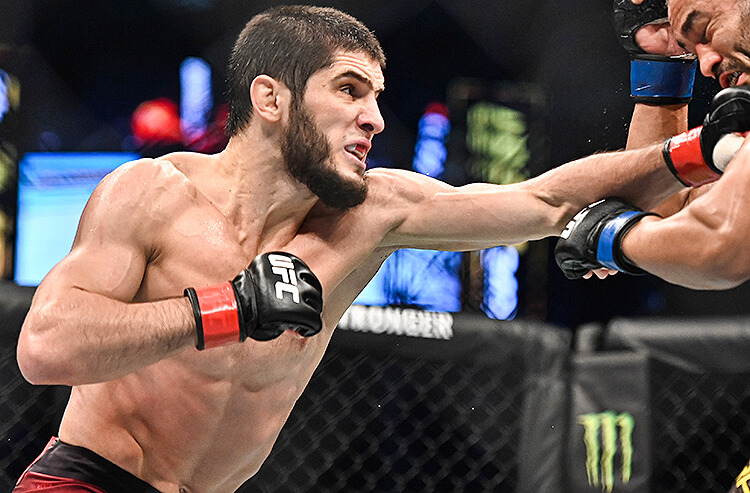