UFC 270 Pereira vs Fialho Picks: Going for Four in a Row

Michel "Demolidor" Pereira has won three straight fights in the UFC and will look to score a fourth in a row when he takes on newcomer Andre Fialho at UFC 270 on January 22. Find the UFC betting value with our picks and predictions for Pereira vs. Fialho.

Michel Pereira vs. Andre Fialho is on the main card for UFC 270 betting on January 22 from the Honda Center in Anaheim, CA.

Pereira was originally scheduled to face off against ranked welterweight Muslim Salikhov last weekend but after Salikhov withdrew, Fialho took his place and the fight was rebooked for UFC 270.

Fialho will be making his promotional debut and the UFC betting lines reflect that, opening with him as a +230 underdog while Pereira comes back at -303.

Here are our best free Pereira vs. Fialho picks and predictions for UFC 270 on Saturday, January 22.

Odds courtesy of FanDuel Sportsbook as of January 18, 2021.

Michel "Demolidor" Pereira has won three fights in a row, most recently a unanimous decision victory against Niko Price last July. After 33 professional fights across various smaller promotions, Pereira made his UFC debut with a highlight-reel flying knee knockout of Danny Roberts in 2019. He's now 4-2 in the octagon and in one of those defeats, he was dominating his opponent before getting disqualified for throwing an illegal knee.

The 28-year-old Brazilian has a background in BJJ, karate, and capoeira, and has seen his popularity surge due to his flashy striking. Pereira uses flying knees, spinning kicks, superman punches, and flips, like a 12-year-old mashing his controller in Mortal Kombat.

However, he has shown more of an all-around approach in recent fights, displaying patience and utilizing his grappling.

Fialho has solid offensive wrestling but his highly technical boxing ability and heavy hands are his biggest strengths.

Pereira vs Fialho tale of the tape

It's always difficult taking a fight on short notice but Fialho doing it in his promotional debut against an unorthodox striker like Pereira makes it extra tough. Fialho is riding a four-fight winning streak but prior to that, he had lost three in a row against unimpressive competition (albeit with one defeat overturned after his opponent tested positive for PEDs).

While Fialho's boxing is impressive, he needs to get into the pocket to land his big right hand and powerful uppercuts, and he could struggle to implement that style against the faster and rangier Pereira.

Even in his victory against Vick, Fialho was getting picked apart at range until he managed to rock his foe with a big shot, and then Vick just moved backward taking punches to the face until the ref stopped the fight. Pereira has far better durability and quickness than a fighter like Vick, whose chin and ability to take a punch are long-gone.

Demolidor will use his explosiveness and creativity to outstrike Fialho and he'll have the edge if the fight goes to the mat as well. The step-up in competition will be too much for the flat-footed Fialho to pull off the upset.

While we think Pereira will likely win this fight, being a 3 to 1 favorite doesn't offer much value. For that, we're looking at the total rounds bet where we think oddsmakers might be a bit too bullish on this fight ending early.

Pereira has been much more calculated in his recent fights and has mixed in his wrestling along with his kickboxing. Three of his last five fights have gone the distance and the two that didn't ended late in the third round.

Fialho has finished his last four opponents but none of those fighters were on Pereira's level. His last two fights in Bellator went the distance and his only bout in LFA (a 2020 defeat to Antonio dos Santos Jr. who had a brief stint in the UFC) also went the full 15 minutes. Take the Over 2.5 total rounds at plus money. 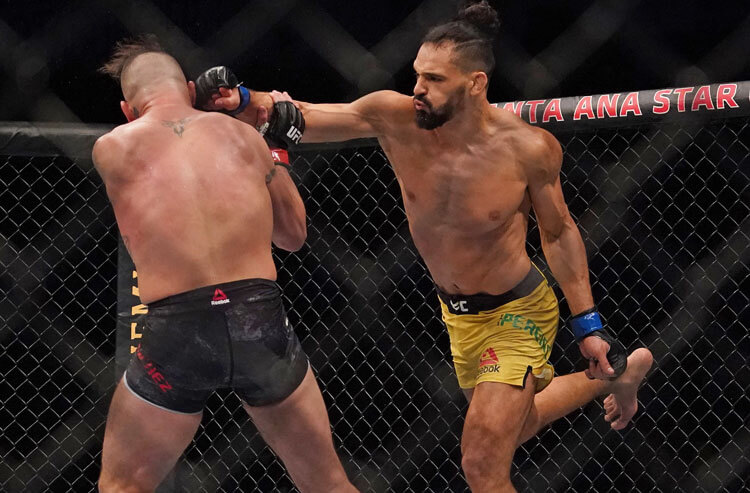 UFC 270 Pereira vs Fialho Picks: Going for Four in a Row
Provided by