Stepping into the octagon is tense enough, but Alessio Di Chirico and Roman Kopylov could be fighting for their UFC futures at Fight Night from Paris on Saturday. Fight out who will come out on top with our UFC betting picks.

Alessio Di Chirico vs. Roman Kopylov is scheduled for three rounds in the middleweight division as a featured undercard attraction of tonight’s UFC Fight Night card from Paris, France.

Di Chirico and Kopylov are coming off losses that are threatening their career prospects in the UFC, with another loss possibly being a critical one at this stage.

This is a pick 'em fight, with both Di Chirico and Kopylov coming in at -110 apiece on the UFC odds board.

Check out our Di Chirico vs. Kopylov picks and predictions, ahead of Fight Night on September 3.

Both Di Chirico and Kopylov found success in the regional circuits before joining the UFC, but both have yet to sustain any momentum upon joining. Between the two, only Di Chirico has registered a win, and both are coming off clear losses in their previous bouts.

These two are likely fighting for their contracts, and that might result in a respectable performance.

Di Chirico is the better fighter offensively, as he lands 3.30 significant strikes per minute at 41% accuracy, and averages 1.62 takedowns per 15 minutes. His average fight time is 10:12 and he has 10 finishes in 13 wins. Six of those wins have been knockouts and three have come by submission.

Kopylov has fared better in his last five fights but looked out of his depth in back-to-back losses against Albert Duraev and Karl Roberson. The Southpaw striker lands 2.72 significant strikes per minute and seven of his eight wins were stoppages in the regional circuit.

This fight is seen as an even money bout and rightfully so. While neither fighter has shined on the brightest stage of their careers, it’s usually these kinds of fights that produce the desperation and drama that can elevate the winner and potentially keep the loser in the mix.

Di Chirico has to bounce back strongly to avoid a 1-5 skid, but Kopylov must pull out all the stops to score a much-needed win.

When two fighters meet under these circumstances, it either becomes a wild brawl or a tedious chess match. Either way, these fighters are going to leave everything on the table to keep their careers in the UFC alive.

Di Chirico vs Kopylov tale of the tape

Di Chirico might have to address some confidence issues after being stopped in just 17 seconds versus Abdul Razak Alhassan last year. He’s up against an opponent that has stopping power and having any hesitation about his own tenacity could be a problem here.

Kopylov needs to come out desperate and let his hands go, but there might be a slight divide in overall talent that favors the Italian.

Kopylov doesn’t have the looks of a fighter who is settling well in his new surroundings. His last two fights were entirely winnable, and he was blown out in each of them. There isn’t much good to find in his recent performances, but he could make something happen against an equally skilled opponent.

That being said, Di Chirico has a slight edge here, and it is enough for us to pick him as the winner here.

Our best bet for this fight isn’t too awfully exciting, but we’re sticking with Di Chirico straight up at -110.

It’s not outlandish to believe he can score a stoppage, but he might be slow out the gates to avoid getting blasted out as he did in his previous fight. Kopylov has been submitted in defeat, but not knocked out.

We’re playing it safe and see good enough value in Di Chirico to stick with the moneyline in what should be a competitive fight. 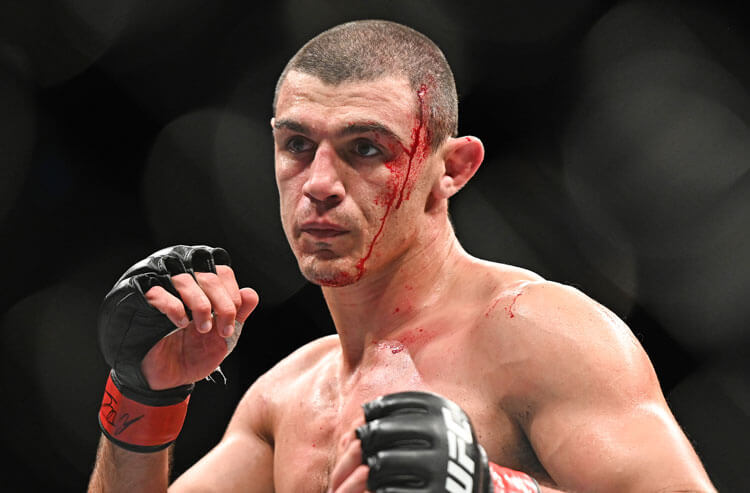