UFC 279 Jingliang vs Ferguson Picks and Predictions: The Leetch Pressured into Loss

UFC 279 is loaded, with the main card featuring what should be an excellent bout between Li Jingliang and Tony Ferguson. It's easy to see why Ferguson is a heavy UFC betting underdog, but our picks make the case for an upset on Saturday.

(Editors Note: Preview was published before fight was cancelled).

Li Jingliang vs. Tony Ferguson is on the main card for UFC 279 on September 10 from the T-Mobile Arena in Las Vegas, Nevada.

This should be a banger between a striking specialist in Jingliang and an aggressive high-pressure fighter in Ferguson who is trying to snap a four-fight losing skid.

Oddsmakers expect Ferguson's losing streak to continue on Saturday with UFC odds installing him as a +250 underdog and Li coming back as a -334 favorite.

Here are my best free Jingliang vs. Ferguson picks and predictions for UFC 279.

"The Leetch" Li Jingliang is fresh off a second-round knockout win against Muslim Salkhov in July which allowed him to bounce back from a lopsided loss to Khamzat Chimaev last October.

Li is 5-2 in his last seven fights, earning four Performance of the Night bonuses and racking up four wins by knockout during that span.

With a background in Sanda, the 34-year-old is a high-end striker with explosive power and solid technique. The Leetch averages 4.39 significant strikes per minute while absorbing 3.66.

Tony "El Cucuy" Ferguson is a lightweight legend who made the move up to 170 pounds after an ugly loss to Michael Chandler in May where he was knocked out cold by a front kick.

That was the fourth loss in a row for the 38-year-old who had previously been dominated by lightweight contenders Beneil Dariush and Charles Oliveira on the mat while getting pieced up by Justin Gaethje on his feet.

In his prime, Ferguson was one of the most entertaining fighters around, combining unpredictable striking with incredible pace and high-level submissions to string together a 12-fight winning streak between 2013 and 2019.

Jingliang vs Ferguson tale of the tape

While going up in weight class can be tough for many fighters, Ferguson actually started his MMA career as a welterweight and is a long fighter with a 4.5-inch reach advantage on Li.

The big problem for Ferguson is his chin at this stage of his career, after withstanding plenty of punishment over a 32-fight career.

However, it's worth mentioning that Ferguson looked very dangerous in the first round against Chandler, scything him with elbows before he got caught with that kick in the second round. He had never been knocked out until he faced the hammer-fisted Gaethje two years ago and that fight went until late in the fifth round.

Although Ferguson has gotten creamed in each of his last four fights those came against the best fighters at 155 and Li has had just as much difficulty against Top-15 guys at welterweight, getting dominated by Khamzhat Chimaev and also losing a one-sided decision to Neil Magny.

Li has plenty of knockout power but Ferguson is the better grappler and throws with more volume which gives him more paths to victory so long as he avoids opening himself up too much.

It's easy to see why the odds are against Ferguson because if his chin is truly gone, then moving up in weight class to face a knockout specialist seems like a nightmare matchup.

However, he has the tools to win this fight, and every time The Leetch has faced a step up in competition during his career he has come up short.

As powerful as Li's striking can be, he has trouble from distance or when it comes to dirty boxing inside, preferring to work from medium range. Don't be surprised if Ferguson's pressure makes it difficult for Li to find his range and puts him on the backfoot.

That puts the betting value on the still dangerous El Cucuy. 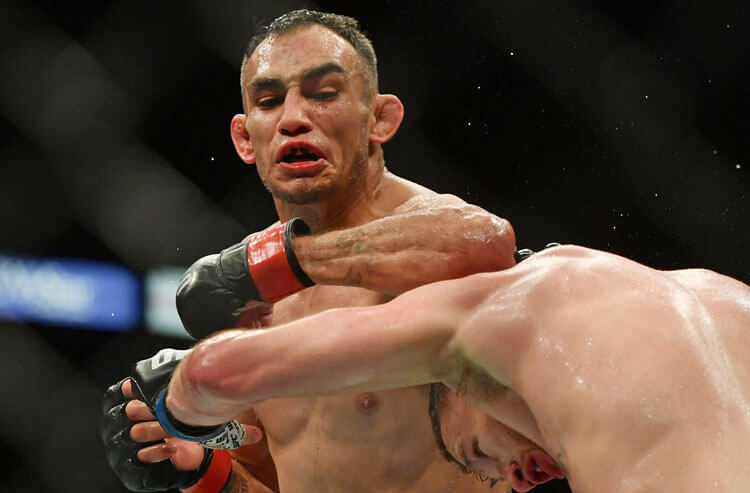 UFC 279 Jingliang vs Ferguson Picks and Predictions: The Leetch Pressured into Loss
Provided by