The biggest event in tennis commences next week in London as Wimbledon season is finally here. With Iga Swiatek favored to win at +160, read more as we break down the favorites, sleepers, and more ahead of this year's action.

Two-time French Open champion Iga Swiatek is a +160 favorite to win the 2022 Wimbledon Tennis Championships, but can the clay-court ace succeed on the grass of the iconic All England Club?

Among her challengers in London will be American prodigy Coco Gauff, who comes in hot off a semifinal exit in the Berlin Open, and 23-time Grand Slam champion Serena Williams, who received a wild-card invite to the major she’s won seven times in singles play.

We examine the 2022 field below with our comprehensive preview of the upcoming Wimbledon tournament, set for June 27 through July 10.

Odds courtesy of DraftKings Sportsbook as of June 23, 2022.

Fresh off her second career Grand Slam title in the 2022 French Open, World No. 1 Iga Swiatek earned the No. 1 seed in Wimbledon’s women’s division. The 21-year-old from Poland reached the fourth round at Wimbledon last year, her best finish at the major to date.

In 2019, she was knocked out in the first round by Viktorija Golubic at The Championships, a year after Swiatek claimed the junior Wimbledon title at the All England Club. Swiatek has won six straight WTA titles and 35 consecutive matches in 2022, and her last loss in a match goes all the way back to February’s Dubai Tennis Championships, where she fell in the second round to Jelena Ostapenko.

The one concern for Swiatek is her win percentage on grass — a mere 50%, compared to 71% on hard courts and 88% on clay.

The 18-year-old phenom from the U.S. met Swiatek in the French Open, where she lost 6-1, 6-3 in her first Grand Slam final appearance. Following her defeat, Gauff competed in the Berlin Open, where she reached the semifinals to mark her best run in a grass-court tournament.

Ons Jabeur defeated Gauff 7-6 (4), 6-2 in Saturday’s semifinal round. Prior to her recent outing at Rot-Weiss Tennis Club, the World No. 12 had never advanced to the quarterfinals of a grass-court tournament.

Gauff owns above a 70% win percentage on grass and has reached the fourth round of Wimbledon twice, in 2019 and 2021.

Despite a first-round setback at Roland Garros last month, Tunisian star Ons Jabeur earned the No. 3 seed at Wimbledon, where she lost in the quarterfinals to Belarusian Aryna Sabalenka in 2021. Jabeur bounced back in the Berlin Open to win the second grass-court title of her career last week by defeating Swiss talent Belinda Bencic, who retired in the final because of an ankle injury.

Jabeur dropped just one set in the Berlin Open and is the second woman behind Swiatek to win multiple titles in 2022. Jabeur also triumphed in the Madrid Open on clay last month.

Wimbledon could be a task even too tall for the indomitable Spaniard.

While the hometown hero will likely draw betting action from the local public, 19-year-old Emma Raducanu was forced to retire after seven games in the first round of the Nottingham Open against Viktorija Golubic on June 4 because of a side injury.

Her health makes her a question mark entering Wimbledon, where she forfeited due to breathing issues in the second set of her match with Ajla Tomljanovic in the fourth round of the 2021 tournament.

Since her stunning U.S. Open victory, Raducanu has struggled and is unlikely to repeat the magic from her hard-court major victory nine months ago.

If you’re signing up for a new sportsbook for Wimbledon 2022 betting, here are two of the best bonuses* available:

It’s a bit odd to consider Serena Williams a sleeper at the All England Club, but the greatest female tennis player of all time has now gone six years without winning a Wimbledon championship.

Still on a quest to secure a record-setting 24th Grand Slam title, Williams entered as the favorite at this tournament last year but tore her hamstring in the opening set of her first match. She went quiet thereafter and did not return to tennis until this week at Eastbourne, playing doubles with Jabeur.

The 40-year-old appeared rusty in her return to the court but looked sharper in her second doubles match, in which she won 6-2, 6-4 over Shuko Aoyama and Hao-Ching Chan on Wednesday. Prior to last year’s shocking first-round departure, Williams lost in back-to-back Wimbledon finals.

While her form will be in question ahead of The Championships, there is no doubt about Williams' ability to dominate this tournament, which she has won seven times.

Her ankle will be the main concern, but Belinda Bencic could make a strong run at Wimbledon if back to full strength. The 25-year-old has won over 70% of her grass-court matches and secured the junior Wimbledon title in 2013.

Bencic also won the Charleston Open earlier this year and has two fourth-round appearances at Wimbledon in 2015 and 2018.

The Brazilian has been on a roll since her second-round loss in the French Open, winning the grass-court Nottingham Open and Birmingham Classic, where she ousted 2019 Wimbledon champ Simona Halep in the semifinals. The 26-year-old is set to play Petra Kvitova in the semifinals at Eastbourne on Friday ahead of Wimbledon.

Although her best finish at The Championships is a second-round berth (both in 2017 and 2019), Haddad Maia’s current form cannot be ignored. There may be no hotter player on the grass at the moment, and Haddad Maia’s momentum could carry her in a fairly wide-open women’s division.

The 28-year-old Florida native is currently ranked No. 8 in the world and made the finals of the 2022 Australian Open, where she lost to last year’s Wimbledon champ, Ashleigh Barty.

Since then, Collins has been up and down, with a first-round defeat in the Dubai Tennis Championships, and second-round exits in the Madrid Open and French Open.

Collins has never gotten past the third round of Wimbledon and was upset in the second round last year by Viktorija Golubic.

The two-time Wimbledon champion has failed to move beyond the fourth round of the tournament in her last six appearances, and her recent form gives no indication a turnaround is near.

The 32-year-old from the Czech Republic opened the year with a slew of first or second-round exits at the Adelaide International, Sydney Tennis Classic, Australian Open, and St. Petersburg Open before earning a spot in the quarterfinals of the Dubai Tennis Championships, where she was knocked out by Ostapenko.

At the French Open, Kvitova survived through the second round, then proceeded to suffer a first-round loss to Haddad Maia in the Birmingham Classic. She’ll get a rematch with Haddad Maia in a semifinals match on Friday.

Ten of the last 10 women’s singles champions were ranked inside the Top 15 in the world at the time of their win.

Because of the ban on Russian and Belarusian players in the 2022 Wimbledon tournament, World No. 6 Aryna Sabalenka and No. 13 Daria Kasatkina will be forced to sit out, along with No. 20 Victoria Azarenka.

Here's looking at: All players in the Top 15, minus Sabalenka and Kasatkina.

Eight of the 10 previous Wimbledon champions had won a prior Grand Slam tournament.

The two outliers of this trend were Marion Bartoli, who won in 2013, and Petra Kvitova, who earned her first Grand Slam title at Wimbledon in 2011 and her second at the same tournament in 2014.

All but one of the last 10 winners had reached the semifinal in a previous Wimbledon appearance.

Ashleigh Barty was the exception when she won The Championships in 2021, having never advanced past the fourth round before her win. 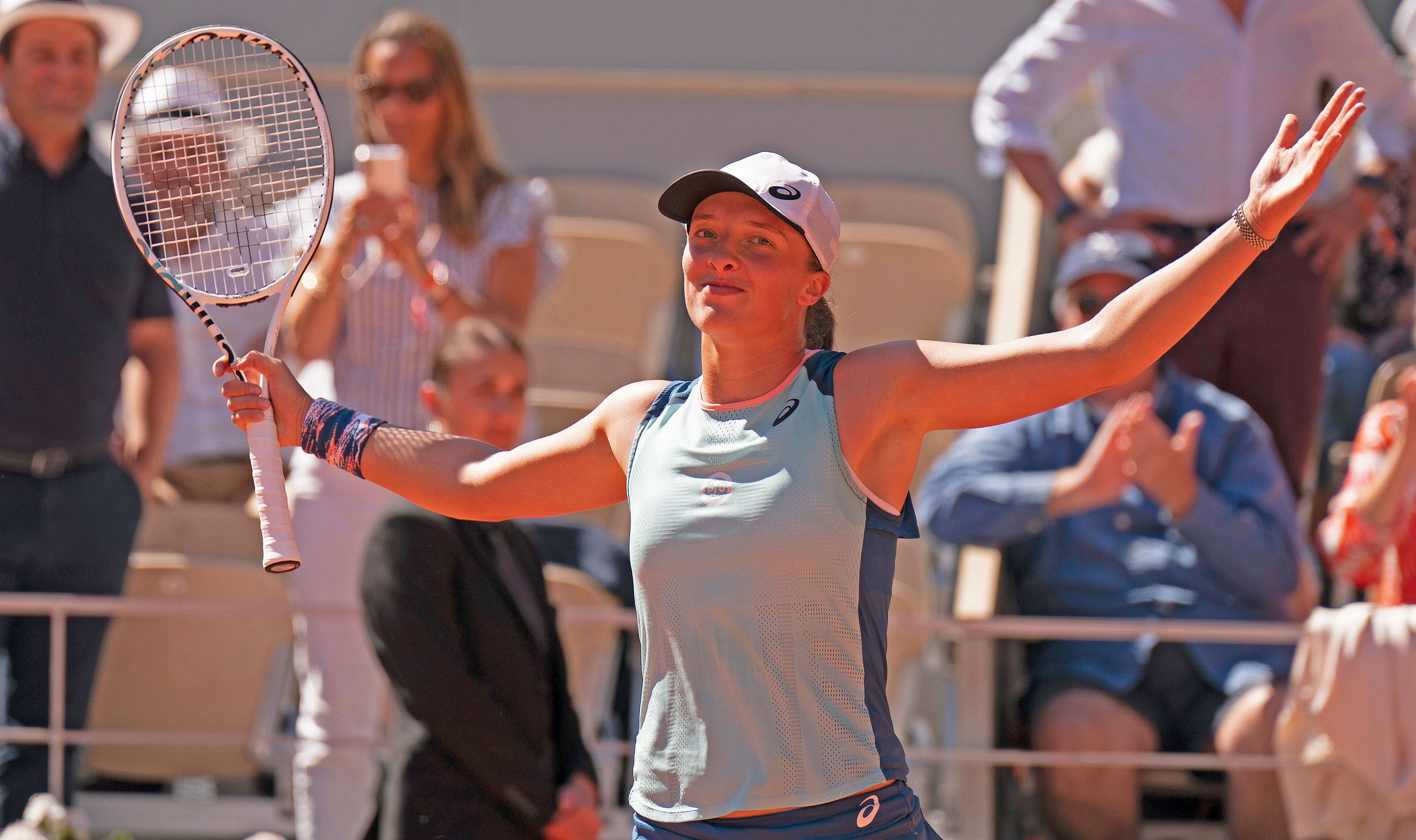