Two women who had never before reached a major semifinal face off in the Wimbledon final for the first time in well over 100 years. Find out whether our tennis betting picks like Ons Jabeur or Elena Rybakina to prevail — but don't expect a quick finish.

A historic Wimbledon showdown is set for the women’s final between No. 17 Elena Rybakina and No. 2 Ons Jabeur at the All England Club on Saturday, July 9.

For the first time since 1903, the Grand Slam tournament will feature two players who had never reached a prior major semifinal. Despite that billing, Jabeur is undefeated on grass this season and currently rides an 11-match win streak, while Rybakina just knocked off 2019 Wimbledon champ Simona Halep in straight sets, 6-3, 6-3, in the semifinal round.

Jabeur, the first woman from Africa to reach a singles final of a Grand Slam in the professional era, is the -160 favorite, but Rybakina’s powerful serve makes her a dangerous underdog in the final round at the All England Club.

Find out your best tennis betting angles with our Wimbledon women’s final picks.

Betting the Wimbledon women's final? Here are two of the best bonuses* available:

Prior to now, Jabeur’s best finish in a major was a quarterfinal appearance in the 2020 Australian Open and the quarterfinal of last year’s Wimbledon tournament, where she fell to Aryna Sabalenka, 6-4, 6-3.

By defeating 103rd-ranked Tatjana Maria — a close friend of Jabeur’s — in the semifinal round in London on Thursday, the 27-year-old Tunisian reached her first major final, becoming the first Tunisian and first Arab player to reach the final round of a Grand Slam tournament in the Open Era.

Jabeur defeated Mirjam Bjorklund, Katarzyna Kawa, and Diane Parry, all unseeded, in straight sets in the first, second, and third round, respectively, then held off No. 24 seed Elise Mertens in a hard-fought 7-6(9), 6-4 victory.

Jabeur will now face a 23-year-old Rybakina, the youngest Wimbledon finalist since 21-year-old Garbiñe Muguruza lost to Serena Williams in the 2015 tournament. Rybakina, ranked 23rd in the WTA rankings, had reached just one quarterfinal in a major (the 2021 French Open) prior to the 2022 Wimbledon event.

The "Ace Queen" was born in Moscow, Russia but switched her nationality to Kazakhstan in 2018. With Rybakina’s win on Thursday, she became the first Kazakh player to advance to a major singles final.

A week before her first-round matchup at Wimbledon, Jabeur secured the second grass-court title of her career at the Berlin Open, where she dropped just one set. Her dominance on the surface continued in London, where she extended her win streak to 11 straight matches and has now won 22 of her last 24. Jabeur’s 84 match wins since the beginning of 2021 are also the most of any woman on tour and three more than World No. 1 Iga Swiatek, who entered as the favorite ahead of Wimbledon but lost in the third round.

With Saturday’s match against Rybakina, Jabeur will play in her fifth final this season. She is 2-2 in her four prior final appearances, with wins in the Berlin Open and the Madrid Open on clay.

Rybakina, on the other hand, has reached just one final this season before Wimbledon. She lost to then-No. 1 Ashleigh Barty in the championship round of January’s Adelaide International on outdoor hardcourt. However, Rybakina has been exceptional at Wimbledon, with an 8-1 record at The Championships across two Wimbledon main draw appearances.

The up-and-coming tennis star is also 1-2 in three head-to-head matchups against Jabeur, all on hardcourt, including most recently in the semifinal of the 2021 WTA Chicago Fall Tennis.

Rybakina showed her mettle against Halep in the Wimbledon semifinal and will be a tough out for Jabeur on Saturday, but the Tunisian will ultimately get the job done to win her first Grand Slam title and become the sixth different woman to win Wimbledon out of the last six editions played.

Jabeur is projected to put Rybakina away in straight sets, but the spotlight of Centre Court may result in jitters on both sides, as this Wimbledon final is the first since 1962 with two women competing in their initial Grand Slam title match.

Nerves seemed to catch up to Jabeur in her second set on Thursday, when she followed up a strong first set with 17 unforced errors in the second of her semifinal match with Maria. However, Jabeur bounced back rapidly in the third, making just three unforced errors, to punch her ticket to the Wimbledon final.

The “Minister of Happiness” will need to rely on her trademark drop shots and other tricks to get past Ryabkina, whose serve may lend her an advantage. Ryabkina’s 217 aces this season are the most on the WTA Tour, and no other player even has 200.

Against Halep, Rybakina recorded five aces, 22 winners, and broke Halep’s serve four times. If she can stay hot and harness her power in the final, Jabeur could be in store for an upset, but the hottest player on grass at the moment will eventually prevail.

This Wimbledon final will see a tense battle between two players on the rise that will require Jabeur to win in three sets in order to hoist the Venus Rosewater Dish. 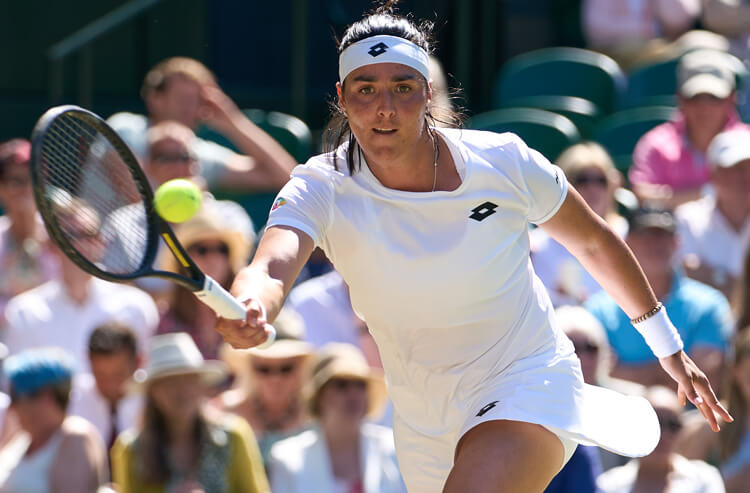