Iga Swiatek has been rattled at points in the US Open, but has managed to right the ship. Against a dangerous foe (and one the crowd will be behind) in One Jabeur, our tennis betting picks see that stretching this final match.

Tunisian Ons Jabeur reached her second consecutive major final Thursday by defeating France’s Caroline Garcia in straight sets to become the first African woman to reach the final of the US Open.

World No. 1 Iga Swiatek reached her second major final of the season and first US Open final with a wild, three-set come-from-behind victory over Belarusian native Aryana Sabalenka Thursday night.

The two best players on tour meet in the last major final of the 2022 tennis calendar, Saturday, September 10. Who will win? Find out in our US Open picks and predictions.

Betting the US Open women's semifinal? Here are two of the best bonuses* available:

Jabeur didn’t face a single break point and won 83% of her first service points en route to a stunning 6-1, 6-3 defeat of Garcia in the first semifinal. Jabeur cracked nine aces with just two double-faults and cashed in on all four of her break point opportunities in a dominant performance.

The Tunisian served out of her mind Thursday night, but she’s just 18th in first service points won at 46% during this event. The saving grace has been her return game, winning a second-best 31 break points with an average of 5.2 breaks of serve over her six previous Open matches.

Jabeur is 38-13 this season on the cement and has reached five finals this season, but none of those finals were on the hard stuff. Jabeur has a winning hardcourt record against the Top 10, with a mediocre service hold rate and above-average break of serve.

Swiatek’s ride to the final was a bit different from her opponent. The world No. 1 found herself down 2-4 in the final set before reeling off four successive games for a 3-6, 6-1, 6-4 victory over Aryana Sabalenka. Swiatek won 73% of her first serves and broke the Belarusian seven times to reach her second major final of the season.

Swiatek hasn’t overwhelmed anyone with her serve and is outside the top-20 in both first and second service points won in NY. The Polish No. 1 leads the tournament with 35 break points won and averages 5.8 break points won per match, with an additional 20 break points saved at the 2022 Open.

Swiatek has dominated the WTA hard courts this season, amassing a 30-5 record with three hardcourt titles (Doha, Indian Wells, Miami) and a 16-2 record against the top-5. Swiatek is 12th in service hold rate with a No. 1 ranked 53% break of serve rate on the cement in 2022.

Jabuer opened at +171 and has been bet down to as low as +156. The public saw the Tunisan slap Garcia silly and thinks the same thing will happen Saturday.

They might be right, but it isn’t often Jabeur rains down nine aces in a tennis match against a top-returner such as Garcia, and maybe she regresses a bit against the best returner in the game.

Swiatek hasn’t had it easy during the final major of the season. In fact, she’s been mediocre by her standards since having her 37-match winning streak snapped by Alize Cornet at Wimbledon, but somehow she’s managed to reach her third major final.

The Polish No. 1 has proven during this fortnight that she can win without playing her best, and has dropped the first set in two of her last three matches. Swiatek was heading for the exits at 2-4 in the final set, but she broke serve and never looked back.

This is going to be a close one, but there’s a huge difference between knowing you can win a major and believing that you can, and that’s where Swiatek has the edge.

Jabeur served amazing Thursday night, but it’s doubtful she can replicate that feat over two or even three sets against the best returner in the game. Garcia was admittedly erratic and let the frustration get to her against Jabeur, but Swiatek isn’t going to let a few bad games or even a lost set affect her, and she’ll battle her own demons as well as Jabeur right to the end.

The likelihood of this match going three sets is fairly high, and over 21.5 games is the best play on the board.

Jabeur is as popular a player as there is on tour, with a terrific story and an opportunity to make history as the first African player to win a major tennis championship. The fans love her, and if Jabeur starts out hot — and she probably will — the fans will be on their feet hungry to see more.

Swiatek has struggled in the opening set in two of her last three matches. She’s been easily frustrated, continually changing the tension on her strings, complaining about the balls and whatever else seems to be bothering her at the moment. If Jabeur hits her spots out of the gate, Swiatek will likely lose the first set.

Then it’s a race to the finish line between a player who believes she can win and one who knows she can win. Since her fourth-round loss here in 2021, Swiatek has won five of her last seven major matches after dropping the first set, and she’ll find a way to win that second set.

Then it becomes a battle of nerves, broken serves, big hitting with the occasional Swiatek outburst, and before you know it, we’ve witnessed a great match and covered the number! 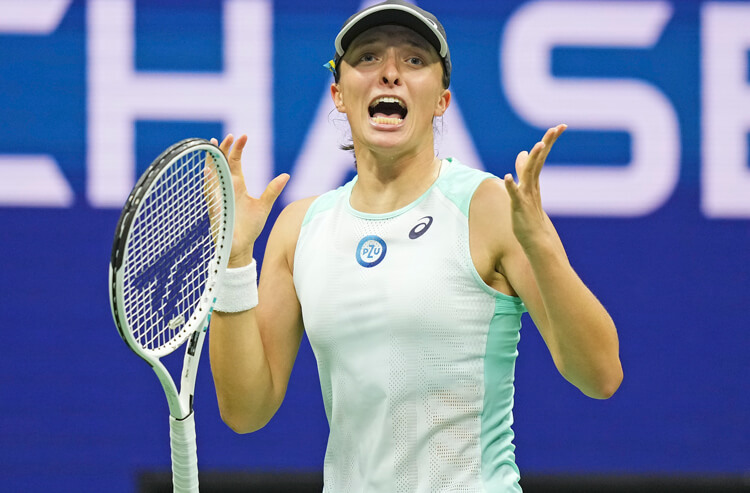