Novak Djokovic is the hot favorite to win a record-equalling 20th major but he’ll have to neutralize the firepower of Italy’s first Wimbledon finalist, Matteo Berrettini, in a battle of an unstoppable force against an immovable object.

It speaks to Djokovic’s level that he hasn’t played anywhere near his best tennis and has still reached the final, dropping only one set in the process. He was pushed to the brink in his semifinal as, despite a straight-sets scoreline, Shapovalov actually won more points but crumbled in the crucial moments, converting just 1 of 11 break point opportunities.

A repeat performance likely won’t be good enough against Berrettini, but who would bet against him turning up the gears? Even in the 2019 final against Roger Federer, he didn’t play close to his best but still played clutch tennis in the three tiebreaks.

Berrettini had a relatively stress-free semifinal, as he capitalized on some Hubert Hurkacz nerves to rip through the first two sets 6-3/6-0 before losing the third set in a tiebreak. However, he regrouped and held his nerve impressively when serving out in the fourth.

Berrettini has developed significantly from the player who froze on Center Court against Roger Federer two years ago, winning just 5 games in a 6-1/6-2/6-2 hammering. He credited that experience with easing his nerves before Friday’s semifinal, which was his first match on Center Court since that letdown.

Djokovic leads the head-to-head 2-0, but the 2019 demolishing was Berrettini’s first Masters Finals appearance and their clay court meeting was always going to favor Djokovic. This is the best surface Berrettini can face Novak on.

Djokovic does enjoy absorbing pace and Berrettini is one of the biggest ball strikers on tour, but just how well Berrettini can serve under pressure will be crucial. If Djokovic gets a read on the serve and engages enough rallies, it will be a long afternoon for the Italian.

Berrettini’s backhand slice will also be extremely important. He can’t compete in the drive-backhand crosscourt exchanges, so he will need to slice effectively to try and force Djokovic to generate his own pace. 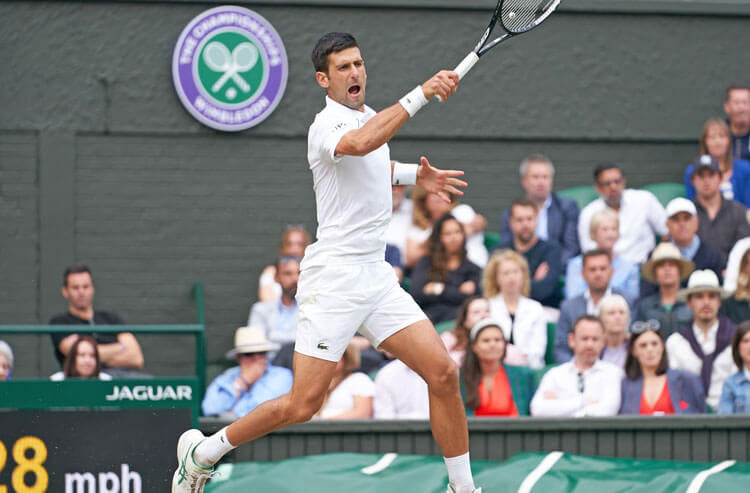 Djokovic vs Berrettini Picks for Wimbledon Men's Final
Provided by