The top women's tennis player in the World is making a long-overdue deep Wimbledon run. Find out the best bets with our women's semifinal picks as Ashleigh Barty and Angelique Kerber get set to face off.

After multiple majors of newcomers in the ladies’ game, natural order has been somewhat restored at Wimbledon. Three of the four semi-finalists have reached this stage at a major before, while Aryna Sabalenka’s debut is hardly surprising. 10 WTA titles and a 46-31 record against Top-10 players suggested a deep run was only a matter of time.

Barty is long overdue for a deep run at Wimbledon — the surface is such a natural fit for her game. Her participation was in doubt after pulling out of the French Open with a hip injury, but she’s playing some inspired tennis. She won the junior event here 10 years ago and with a 33-6 record in 2021, adding to her major haul seems likely.

The 2018 champion was suffering a dreadful 2021 before winning a warmup event in her home country. She’s improved match-by-match during this tournament and looks close to her peak form once again. The weakest area of her game, the serve, gets more protection on the grass with the ball staying low, while her flat groundstrokes zip through the court. Behind Serena & Venus Williams, the German has the most victories on grass of any active WTA player.

This will be a fascinating ‘cat & mouse’ matchup. Barty’s use of slice will force Kerber to generate her own pace, while Barty’s favored tactic of approaching the net will be tested by Kerber’s amazing passing shot ability. 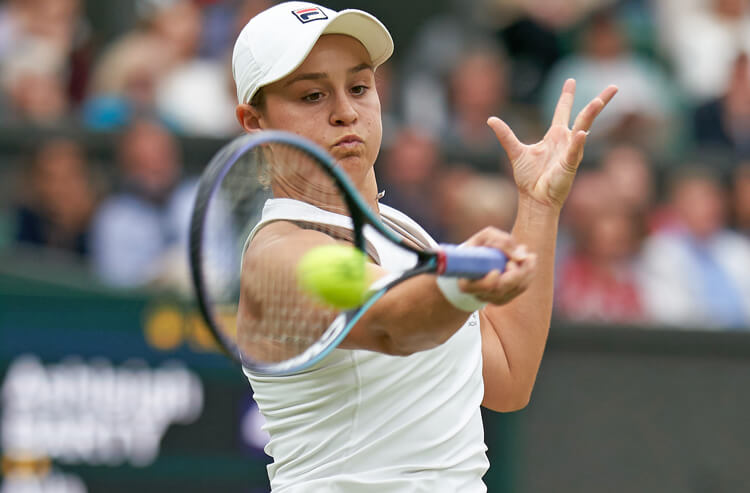 Barty vs Kerber Picks for Wimbledon Women's Semifinal
Provided by