Australia's backend certainly looked vulnerable in their opener against France, but Tunisia were held scoreless against Denmark and doesn't have the firepower needed to take advantage. Expect the Aussies to keep them away from the scoresheet once more.

The 2022 World Cup is well underway and we have a very important Group D match on tap from Al Janoub Stadium in Al Wakrah.

Tunisia opened with a scoreless draw against Denmark, a team that is expected to advance in the group — along with defending World Cup champ France — but Tunisia is trying to change the narrative, and can really put pressure on Denmark and the rest of the group if they can break through with a victory.

Australia opened its first match well with an early 1-0 lead, but the star power of France took over, as Les Bleus rattled off four consecutive goals for the opening-match rout on this very same pitch at Al Janoub.

Each of these nations have rather long World Cup odds in the futures market (+40,000 at BetMGM), and your money would be better spent elsewhere. Tunisia managed to steal a point in the opening match, so they’re more attractive if you just can’t pass on a long shot.

Can Tunisia make it two in a row with a point or more, or will Australia regroup after a sound beating and get its World Cup back on the rails? I  discuss in my World Cup picks for Tunisia vs. Australia below.

Tunisia vs Australia picks and predictions

Tunisia started off well as a decisive underdog against Denmark, and Issam Jebali had a strike in the first half which made world-class keeper Kasper Schmeichel have to be on his toes early. In fact, it might have been the strike of the game, which is saying a lot for Tunisia.

The Eagles suffered a pair of scares in the second half, including a disallowed goal due to offside. Tunisia also benefitted from a VAR call, as a Christian Eriksen corner hit the arm of Yassine Meriah. However, the referee decided a spot kick was not warranted and Tunisia escaped disaster. It was that close to going south for the Eagles, but they survived.

The Aussies worked a nice tic-tac-toe play down the field to surprise France early. Harry Souttar found Mathew Leckie down the right side on a long pass and the latter hit Craig Goodwin on a low cross before he tucked it in past Hugo Lloris.

Australia was supposedly facing a banged-up French side, but if this is a side not at 100%, the rest of Group D — and the rest of the World Cup field — might be in trouble. It certainly isn’t a good sign for the Socceroos, as they allowed four goals within 44 minutes, including two to Adrien Rabiot.

Things could have been different in stoppage time in the first half, as Riley McGree just missed the equalizer, and that was the last time Australia would make noise again.

I am concerned about Australia’s problems in the back end, as France worked through them like a hot knife through butter, but I don’t think Tunisia has nearly the same world-class talent as Les Bleus.

Playing Australia to win and Tunisia not to score can help you more than quadruple your initial wager. That’s too much value to pass up.

B) Tunisia to win and both teams to score BOOSTED to +450 at Betway! Bet Now

Tunisia vs Australia side analysis

Tunisia have never advanced to the knockout stages in World Cup play and will have their hands full against a desperate Australian side. Neither team can afford a loss and will be likely pushing and taking a lot of chances to get on the board.

Tunisia had a nice chance early but didn’t really make a lot of noise the rest of the way against Denmark. Australia’s issues in the back end could afford the Eagles a few more chances, but I still don’t think the toothless Tunisian offense can hit the back of the net here.

Tunisia is actually listed as the favorite in this one, but that’s a little unfair to Australia. Yes, the Eagles were strong on defense, and the Socceroos were pounded by France, but it was a tough draw for the Aussies facing off against the defending champs. Expect a much better performance here, as it finds a way to level its group stage record at 1-1.

There's a lot of pressure on Tunisia here, as they are a rare favorite, and history is against them, as the Eagles have never made it past the group stage. Australia was blasted 4-1 by France, so most outside of Oceania aren’t expecting much from the Socceroos.

If you’re not interested in declaring a winner, but would like a little action here, take a look at the double chance and total goals market. You can play Australia or Tunisia and Under 1.5 goals (+290 at BetMGM) for a chance to nearly triple up.

If there is a draw or more than two total goals, you obviously lose, but if either side wins by a 1-0 score, you’re in good shape. I really like Australia to pull the mild upset here, but that’s an attractive play regardless of the winner.

I think Australia has a little more offensive firepower than it showed last time out. The Socceroos still nearly struck for a second goal, so there is a risk here.

However, Tunisia is deliberate on offense and suffocating on defense and a track meet will never materialize here. We should get at least one goal, but don’t expect much more than that. 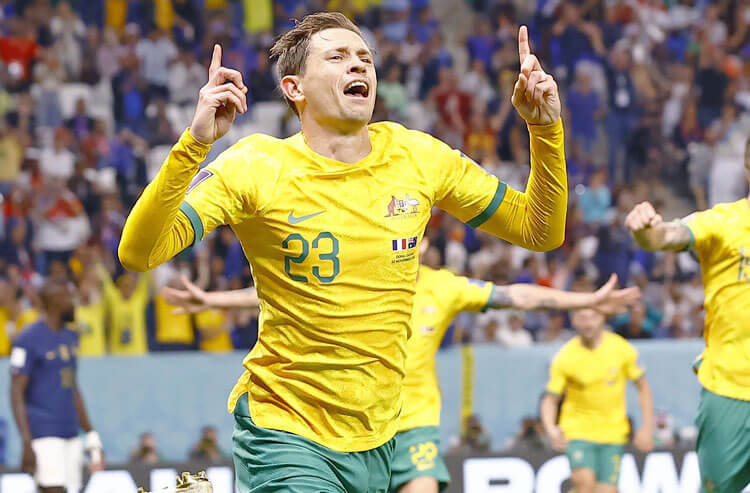 Argentina vs Australia World Cup Picks and Predictions: Under-whelming in Round of 16
Tom Oldfield | Dec 3, 2022