After dropping points twice in the first three games, the USA can't afford many more bumps as they try to return to the World Cup. Will the USMNT pick up a third win over Jamaica this year? Keep reading for our full picks and predictions.

Two teams will look to put a disappointing international window behind them as they continue the final round of World Cup qualifying on Thursday, as Jamaica travel to Austin, Texas, to take on the USA. After three games, Jamaica sit dead-last in CONCACAF qualifying on a single point, while the USMNT are third on five points having dropped points against El Salvador and Canada in the first set of games.

Which of these sides will get off to a better start in this international window? Keep reading for our USA vs. Jamaica picks and predictions, with kickoff at 7:30 p.m. ET on October 7.

It will be great conditions in Austin on Thursday for Jamaica and the USA's meeting, with temperatures expected around 90 degrees Fahrenheit at kickoff and just 30 percent humidity.

Despite sitting last in the table after three games, Jamaica are one of the most interesting teams remaining in CONCACAF qualifying. In an effort to make just their second World Cup, Jamaica focused their efforts on convincing English-born dual-nationals to commit to them. The squad Jamaica has called up for this set of fixtures includes six players playing in either the top two divisions in England or in the top division elsewhere in Europe, all of whom are relatively new to the squad.

Unfortunately, that doesn't include West Ham's Michail Antonio, who recently made the switch and made his Jamaican debut in the last international window against Panama but withdrew from this squad. Antonio will be joined on the sideline by the best player Jamaica have produced in a long time in winger Leon Bailey. So, while Jamaica have a bevy of talent options available to them, it may end up being a case of too little too late for this World Cup cycle.

That's good news for a U.S. side that can't afford many more slip-ups in an increasingly competitive World Cup qualifying field after they drew two of their first three games. They have more good news to help them get back on track, too, as the spine of their team will return for this fixture as first-choice midfielders Weston McKennie and Tyler Adams come back into the fold. Adams, in particular, is of such importance and has such a high level of ability that his presence will change the team altogether.

While attackers Christian Pulisic and Gio Reyna are out of the squad completely due to injury, it isn't all bad news there. Lille's Timo Weah returns after missing out last time with an injury, and 18-year-old Ricardo Pepi has been called up and appears to be on a path to stardom. The Mexican-American striker has 13 goals in 22 starts for a woeful FC Dallas team this season and made his full international debut in the previous window after choosing the USA over Mexico, scoring and adding an assist in a fantastic showing for the U.S. in their 4-1 win over Honduras.

The USMNT have already beaten Jamaica twice in 2021, in a friendly in March and then in the quarterfinals at the Gold Cup, and will make it lucky number three in Austin.

It's a shame that Jamaica has to go through this international window without Bailey or Antonio, but they can still rely on the attacker who has shown up the most for them over the last several years. Shamar Nicholson scored seven times over 12 appearances for the national team in 2019, including two in two starts at that summer's Gold Cup, and then picked up where he left off with the Reggae Boyz this year with three goals in seven appearances.

Two of Nicholson's three international goals this year came in the previous set of World Cup qualifiers, and in incredibly impressive circumstances, scoring in San Jose against Costa Rica and then at Estadio Azteca against Mexico. Nicholson's good form has extended to club level, too, where he has five goals and two assists in just 519 minutes for Charleroi in the Belgian first division. Scoring at an excellent rate, at age-24, in one of Europe's premier leagues for developing young talent is a great sign for his future. Luckily for Jamaica, his present appears to be just as promising.

The U.S. will allow looks at goal for Jamaica just as they did in their quarterfinal meeting at the Gold Cup, where American goalkeeper Matt Turner turned away five shots from Jamaica. That USMNT wasn't full strength and this one won't quite be either, with first-choice center-backs Tim Ream and John Brooks both out of the squad. Brooks will be particularly missed against the 6-foot-4 Nicholson, as he is equally adept in aerials, ranking in the 84th percentile for headers won in Europe. 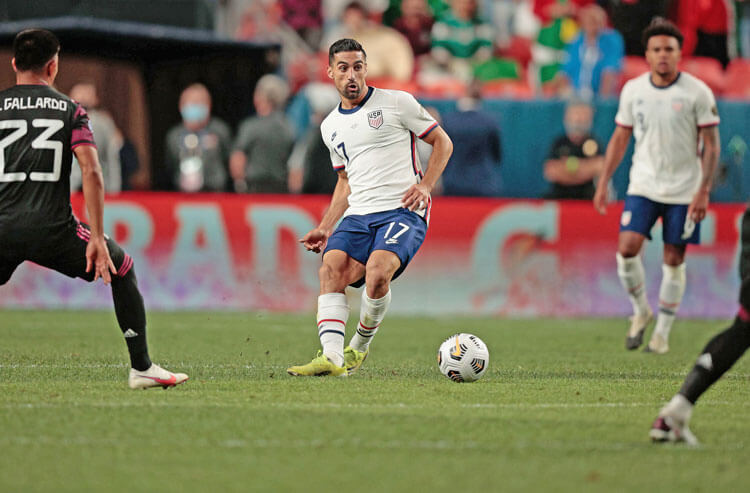