Mexico vs Canada World Cup Qualifying Tips and Predictions: A Step Too High for Youthful Canada

It's been a historic stretch for Canada with their most talented men's generation to date but against Mexico, they'll get their toughest World Cup qualifying test yet. Find out if they can leave Mexico City with a point with our picks.

CONCACAF World Cup qualifying will continue this week with its second round of games, as the region's final eight battle it out for three spots at the 2022 World Cup. On October 7, the top-two teams in the table will clash in the region's most feared venue as a young Canada team goes to Estadio Azteca to take on Mexico.

The last time these two countries met in a competitive fixture, it took until the 99th minute for a winner to be scored. Keep reading for our Mexico vs. Canada picks and predictions to know what to expect this time.

Canada and Mexico will have calm and not overly humid conditions for their game on Thursday night. Temperatures at kickoff are expected to be around 70 degrees Fahrenheit, with 46 percent humidity.

It has been a phenomenally encouraging year for Canada's men's soccer team, as they reached the final round of World Cup qualifying for the first time since 1998 and then reached the Gold Cup's semifinal for the first time since 2007. The most encouraging moment, however, may have come in a loss to Thursday's opponents. Down their best player in Alphonso Davies, as well as their first five-choice strikers, Canada pushed Mexico all the way to the edge of extra-time in the Gold Cup semifinal before losing after a 99th-minute winner.

Since that promising summer and encouraging-if-not-devastating semifinal loss to Mexico, Canada has also gone on the road to the United States and drawn, taking a point from the second-hardest fixture remaining in World Cup qualifying. However, they now must face the single-most-difficult fixture in CONCACAF: A trip away to Mexico at Estadio Azteca.

Not only are Mexico the most talented team in the region and the one with the most tournament nous, but they also boast the best home-field advantage. Estadio Azteca, in Mexico City, is at an altitude of 2,200 meters above sea level (nearly 600 meters higher than the Broncos' NFL stadium) and holds nearly 90,000 fans. With the quick turnaround in international games, opposing teams simply do not have the time to get acclimatized. Since the stadium opened in 1966, Mexico has lost just twice at home in World Cup qualifying, with a record of 41-2-8.

Even though Canada's squad is considerably better and healthier than the one that pushed Mexico at the Gold Cup, they'll be playing in one of the most intense atmospheres most of the youthful squad has ever played in. Canada won't be the only improved squad, either, as El Tri will return several key players who didn't take part in the Gold Cup, including Raul Jimenez and Chucky Lozano.

A draw would be one of the most celebrated results in Canadian men's soccer history, but even that is a stretch too far.

It's amazing that this is even a possibility, after Jimenez's career was in jeopardy a year ago after a horrific skull fracture, but the Wolves striker will return to the national team for the first time since a November 2020 friendly that came less than two weeks before that injury was suffered. Thankfully, Jimenez's return has been without issue early in the season, as he is the only outfield player to have played every minute of Wolverhampton's Premier League season up to this point.

While Jimenez has been a locked-in starter from the first whistle, he has recently begun to round into form again. He scored his first goal post-injury in a win over Southampton at the end of September, then provided the assist on both of Wolves' goals in their 2-1 win over Newcastle United last weekend. All three contributions were typical Jimenez moments, with his physicality, technical skill, and ability to drop deep and help create the build-up all on display.

Jimenez will now carry that form to a Mexico team he was fitting into perfectly before his injury. In 14 appearances for Mexico since 2019, Jimenez has scored nine times and added four assists, with three goals in four games in 2020. Between Jimenez's ability to drop in and collect the ball, and Mexico's bevy of skilled wingers and box-to-box midfielders, they're able to create plenty of chances with Jimenez reaping the reward as he arrives late.

Canada is beginning to produce world-class talent, most notably in attack, but their skill level at center-back is still not up to the level of other top teams in CONCACAF. Whether Jimenez is finding space or bodying a Canadian defender off the ball in a 1-on-1, he will finish at least one of the chances he gets on Thursday. 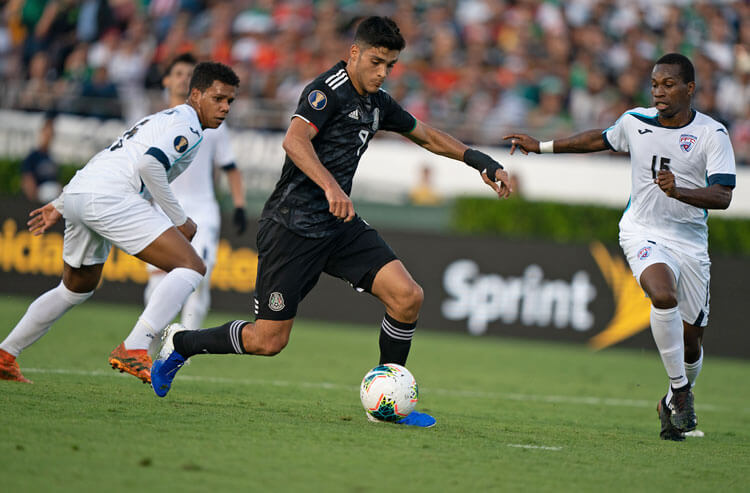 Mexico vs Canada World Cup Qualifying Tips and Predictions: A Step Too High for Youthful Canada
Provided by