Qatar vs Canada Picks and Predictions: Styles Make For Thrilling Fight in Vienna

The World Cup is under two months away and the final preparations have begun. For Canada and Qatar, that means a friendly on Friday in Vienna — and for soccer betting, it means plenty of goals between two thrilling sides, as our picks highlight.

After qualifying for their first men's World Cup since 1986, Canada are headed to Qatar in November for the world's most prestigious soccer competition. First, they'll face Qatar, as the two World Cup-bound sides square off in a friendly in Austria on Friday.

As preparation for the 2022 World Cup heats up, two exciting, attacking sides will come together for what will be a fascinating friendly. We break down the soccer betting value for Qatar vs. Canada with our picks and predictions.

Qatar vs Canada picks and predictions

Already viewed controversially, due to the country's World Cup bid, the Qatar national team were involved in further controversy last summer as they were invited to the CONCACAF Gold Cup.

Contested between the region's teams based in North and Central America, Qatar joined after competing at the Asian Cup as well, as they pushed to be tournament ready for their turn as hosts. Though that controversy would still follow Qatar, they certainly proved their worthiness to the tournament's competitiveness.

Two years after tearing through the Asian Cup as winners, scoring 19 goals and conceding just one (in the final to Japan) they looked set to do the same to CONCACAF. They reached the semifinal having played four and won three, with 12 goals scored and five conceded. However, their rollicking style was subdued by the USMNT's regional dominance and composure as they lost 1-0.

Though Qatar failed in their push for another cup success, a statement had been made: Qatar were going to play their way and be uncompromising in doing so. The expansiveness that marked their Asian and Gold Cup outings has continued in the friendlies since then.

In Qatar's 10 friendlies since the Gold Cup, there has been an average of 3.0 goals per game — highlighting not only Qatar's commitment to a way of play but also the way in which their openness can be punished by good teams.

Canada won't need an invitation to punish Qatar, with CONCACAF's best attacking talent involved. The squad that has joined up in Austria includes Alphonso Davies, Cyle Larin, and Jonathan David, the core of an attack that scored a region-high 23 goals in 14 World Cup qualifiers.

Production will be needed if Canada want to get anything from this game, because their defense is susceptible, too. Though they conceded a regional-low seven goals in WCQ, fantastic goalkeeping, rigid structure, and some weak competition aided that mark. Canada's backline, the centerbacks in particular, are of concern ahead of the World Cup — and in this match.

Friendlies are tricky to handicap, especially pre-tournament ones such as this where preparation is the only goal. However, to back both teams to score is a logical play independent of the circumstances, and at +110, it's good value too.

If you're signing up for a new sportsbook for some International Friendly betting, here are two of the best bonuses* available:

Canada manager John Herdman is far too analytically minded and intentional, in everything he does overseeing the men's team, to treat this like a simple kickabout and send his team out to play an exhibition. They'll have a clear plan and be competitive, but what the plan is, remains to be seen.

They could experiment with a flat, five-man backline and try to absorb pressure against a team happy to play with the ball, in an attempt to prepare for and simulate their upcoming group stage game against Kevin de Bruyne and Belgium.

Or, they could play aggressively, with Davies and Tajon Buchanan as wingbacks, and attempt to pin Qatar's direct attack in their own half — as they may have to do against Achraf Hakimi and a rapid Morocco team when they meet in Group F play.

I intend to play a side here on Friday but I want to remove as much of the uncertainty as possible, while retaining some betting value. Canada are superior to Qatar and should get a result, regardless of what they set out to do, so a same-game parlay of Canada/draw (-300) and both teams to score (+110) gives you nice +170 odds at bet365.

The movement and pace of Davies and David, in particular, against a team that plays as open as Qatar will be trouble. The amount of space and time Canada's attack will be afforded, as well as the chances on the counter that will come due to Qatar playing high, will lead to a lot of chances. Canada aren't short on players who can finish chances like that against this level of competition.

However, on the other side, there is a fair bit of concern as it relates to Canada's defense. Of the five natural centerbacks called in, only Kamal Miller is without a cause for concern, really.

Derek Cornelius has been out of form for years and has been in and out of the national team. Scott Kennedy, though a consistent performer for Canada, has been a part-time player in the 2. Bundesliga this season. Steven Vitoria, now 35, hasn't played regularly in several seasons and his ability to hold up physically remains to be seen. And Joel Waterman, rightfully rewarded with a call-up amid a breakout season for CF Montreal at age 26, was playing amateur soccer just a few years ago.

The intentionality Qatar play with going forward will test a suspect Canada backline, and I don't expect Canada to flawlessly pass that test.

A beautiful, clear evening in Vienna is forecast for Friday evening. Temperatures at kickoff are expected to be around 60 degrees Fahrenheit with little wind or humidity. 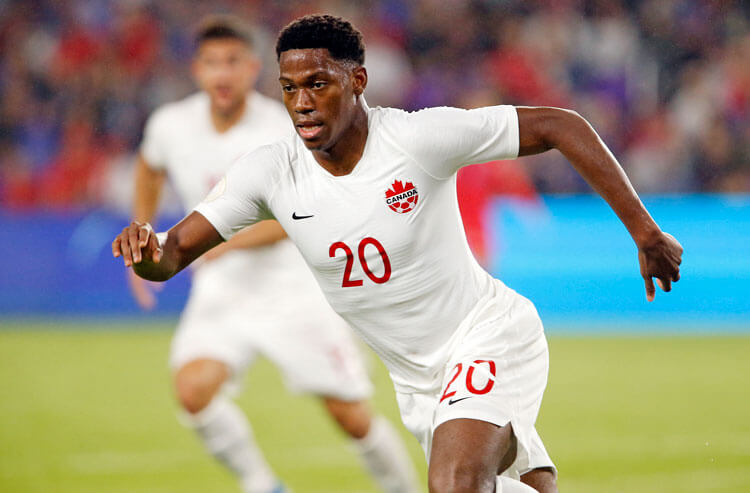 Qatar vs Canada Picks and Predictions: Styles Make For Thrilling Fight in Vienna
Provided by