Panama have impressed early in qualifying as they look to reach their second straight World Cup, while the USA lead the group in an effort to make up for their previous failure. In a hostile environment, can the USMNT keep winning? Find out with our picks.

Three points separate the USA and Panama in World Cup qualifying as the USMNT travels to Panama City for the fifth game in qualifying on Sunday.

The U.S. lead qualifying in CONCACAF so far, as they look to return to the World Cup after the disaster of the previous cycle. Panama, meanwhile, have impressed early in the final round of qualifying and are in the mix to make their second straight World Cup, after going to the first in their history in 2018.

Find out how we like this one to play out with our Panama vs. USA picks and predictions, with kickoff on October 10.

The conditions in Panama City will be unwelcoming on Sunday for the USA and Panama's meeting. Temperatures will be around 80 degrees Fahrenheit with humidity upward of 85 percent. Thunderstorms and an 80 percent chance of rain are forecast, as well.

After a disappointing Gold Cup this summer, in which they went out during the group stage, Panama got off to a bright start in the final round of World Cup qualifying. With five points through three games, the 2018 World Cup participants were in the thick of the race for a Top-3 spot and a berth at the 2022 World Cup. However, the Panamanians took a step back on Thursday with a 1-0 loss to fellow qualification contenders El Salvador.

In Panama's second of three games this window, they have a great chance to rebound with a point at home after traveling to San Salvador on Thursday. Panama have been a different team at home during qualification, having begun the final round with hard-earned draws against CONCACAF giants Mexico, as well as elder statesmen of the region, Costa Rica. In fact, Panama haven't lost at home since a friendly with Ecuador in November 2018, with their last home loss in a competitive fixture coming in November 2015.

While things are looking up for the USA, as they look to return to the World Cup after missing out in 2018, it wasn't long ago they came out of the gates sleepwalking. A 0-0 draw away to El Salvador opened up the final round of qualifying for the USMNT in September, a result which was followed by a 1-1 draw at home to Canada.

Traveling to Central American countries in qualifying is a unique beast and one that's impossible to prepare for ahead of time, even for a U.S. squad with players littered throughout Europe at club level. Between the weather and the environment in which they play, this USMNT will get the full CONCACAF experience. It's not unreasonable to expect a youthful squad to take their lumps away from home during this qualifying cycle, especially after a veteran-laden team picked up just three points in five away trips during the final round of qualifying in 2016/17.

These two countries played to a 1-1 draw in Panama City in the final round of qualifying during the previous cycle, and another deadlock is set to occur here, with Panama keeping themselves in the mix for a trip to Qatar next winter.

The legend of 18-year-old striker Ricardo Pepi grew in the USMNT's win over Jamaica on Thursday, as the FC Dallas product scored his second and third U.S. goals in his second appearance. After electing to represent the United States instead of Mexico, Pepi now has three goals and an assist in less than 160 minutes of competitive playing time and appears to be the answer at striker in a lineup loaded with attacking talent elsewhere.

With Christian Pulisic not involved in the squad due to injury and Timo Weah on the bench, Pepi was the focal point of the United States' attack against Jamaica, with Brenden Aaronson and Paul Arriola playing as natural wide midfielders and providing service to Pepi. After the youngster was substituted before the 70-minute mark on Thursday, he should start up front again on Sunday. And, as he has made a habit out of at club and international level, he'll get a goal too. 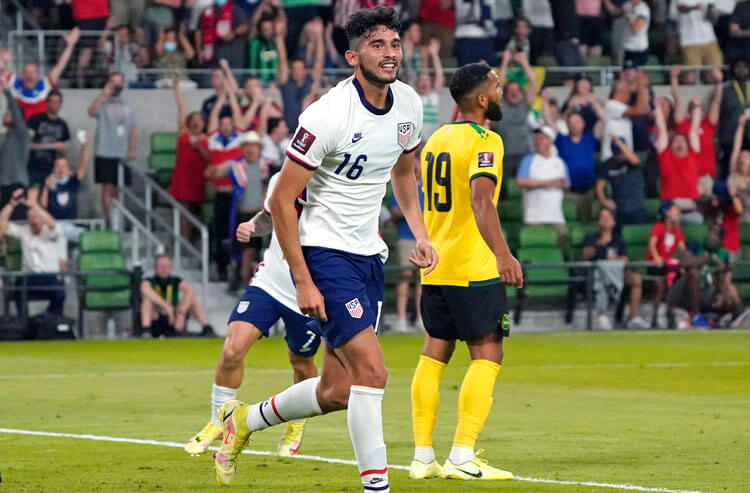