Bayern Munich only just celebrated their 10th straight title, and 2022-23 Bundesliga odds like them to make it 11 in a row next season. The German powerhouse already sits as major favorites — check out the full Bundesliga title odds below.

Banner signings and a new, prodigal manager both underwhelmed during the 2021-22 season for Bayern Munich, and yet there they were at season's end, crowned Bundesliga champions for a 10th consecutive season.

The German powerhouse has rarely been challenged during this incredible run, with Bayern's success spanning several different managers and failed opposition from various teams around them.

The future of their biggest star may be up in the air, but Bayern Munich are still massive Bundesliga title odds favorites looking ahead to 2022-23. We take a look at their odds and who may challenge them next with our Bundesliga odds.

Bayern were upset in the Champions League by Villareal, upset by Bochum in the league, failed to win any of their final three games of the season, and appear to be on the brink of losing record-breaking striker Robert Lewandowski this summer... and are -500 favorites to win the Bundesliga for an 11th straight season.

That's the reality of the Bundesliga, where no other team has come particularly close to Bayern over the last decade — and typically lose their best player(s) to them if/when they do. Barring a disastrous summer in Bavaria, Bayern's odds will only get shorter as the season progresses.

For the sixth time since winning the league in 2011-12, Dortmund were the Bundesliga's bridesmaid last season, finishing eight points back of Bayern.

While they're arguably the world's best club at identifying young talent and developing them to star status, they have a titanic job on their hands ahead of next season as they look to replace Man City-bound Erling Halaand. Highly thought of youngster Karim Adeyemi has been signed from RB Salzburg but it'll take more than the 20-year-old to replace Halaand.

The villains of the Bundesliga salvaged what had started as a terrible season, climbing to fourth in the table and reaching the Europa League semifinal. Financial power and a pipeline of talent will never be a problem for Leipzig but both could need to be flexed over the summer, should they lose talisman Christopher Nkunku.

Bundesliga futures odds are constantly adjusted throughout the offseason due to player transfers and injuries. Once the season begins, title odds will change as teams win and lose games and as more players get hurt or suspended. Sportsbooks will also adjust Bundesliga odds based on handle and liability to certain teams.

This means that on a $100 bet, you'll stand to win $715 if Borussia Dortmund wins the Bundesliga Championship. If it's close to the end of the competition (or in the Bundesliga's case with one dominant powerhouse), you might see a team with a minus sign (-) ahead of its odds.

This means that you would need to bet $717 to win just $100 on a FC Bayern championship.

Above we have posted the American odds for Bundesliga. However, these are easy to convert to decimal odds or fractional odds with our odds converter tool.

Bayern Munich have won the Bundesliga for the past 10 years running.

12 different teams have captured Bundesliga titles since it was founded in 1962. 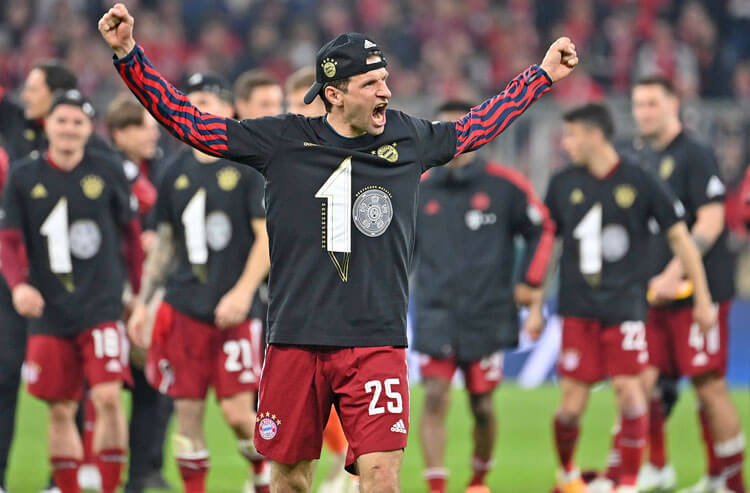