Mexico vs Canada Gold Cup Tips and Predictions: Come at the Kings

Reigning champions Mexico have cruised through the 2021 Gold Cup and will now have their throne tested by a promising young Canada squad. Will El Tri end Canada's great tournament run and return to the final? Check out our tips and predictions.

Reigning champions and tournament favorites Mexico will meet a new opponent in the semifinals of the 2021 CONCACAF Gold Cup, as a promising young Canada squad has reached the final four for the first time since 2007.

Already depleted by injuries entering the knockout stages, Canada will be even more shorthanded as they meet the powerhouse El Tri. Without a number of their best players, can the Canadians deliver a famous victory? Check out our Mexico vs. Canada tips and predictions.

Should the roof at Houston's NRG Stadium be open on Thursday evening, it will welcome in a cloudy, warm night with temperatures expected around 85 degrees Fahrenheit.

The good news for Canada? The 2021 Gold Cup has only further solidified the notion that their current generation is more talented and deep than any other men's team they have produced. The bad news? They will now face the region's best team, Mexico, without five of their six best attacking players.

Jonathan David and Alphonso Davies, neither of whom were on the initial roster, are arguably the two most talented attackers the country has ever produced on the men's side. Canada was able to get by without them due to their attacking depth, but that has taken hit-after-hit as strikers Cyle Larin, Ayo Akinola, and Lucas Cavallini will also miss out on the semifinal.

Crucially, in a matchup that will see them pinned back in their defensive half for the majority of the game, Canada will also be without center-back and captain Steven Vitoria, who is suspended due to yellow card accumulation.

While the lack of options up top and the absence of their leader at the back sting, it may not have mattered anyway. Mexico has been absolutely dominant at the Gold Cup as they look to win back-to-back CONCACAF titles. A brief hiccup in the form of a 0-0 draw with Trinidad and Tobago to begin the tournament has been followed by flawless performances, highlighted by a 3-0 win over Honduras in the quarterfinals in a game that could have finished 6-0 to Mexico.

El Tri lost one of their best young attacking talents in the opener, as Chucky Lozano suffered a head injury, but a newcomer to the team has helped them carry on without issue. Funes Mori, one of the best strikers in Mexico's Liga MX for over half a decade, recently made the one-time switch from Argentina to Mexico and has continued his strong goalscoring record on the international stage. Funes Mori has three goals at the Gold Cup, and had one goal and another dangerous opportunity called off due to offside against Honduras.

Mexico entered the tournament as favorites, have cruised through to the semifinals, and what was once feared to be a weakness has proven to be a strength with Funes Mori performing superbly this summer. CONCACAF's kings will keep their title defense alive and head back to the Gold Cup final.

In their toughest test of the tournament so far, in their final group stage game, Canada allowed the USA to control play and attempted to attack on breaks, an approach often used by this Canadian team against stronger sides. While they were held without a goal against the U.S., they were unlucky not to score (and win).

Unfortunately for Canada, not only is this Mexico team considerably better than the USMNT they faced at the end of the group stage, but they are worse off since then. In that loss against the USA, Canada saw recent debutant Ayo Akinola suffer a serious knee injury, while uber-reliable striker Cyle Larin suffered a tournament-ending injury. Worse still, fourth-choice striker Lucas Cavallini is suspended for the semifinals due to yellow card accumulation.

Barring some tactical creativity from head coach John Herdman, it will now be on Tesho Akindele to lead the line. While Akindele is a solid player in Major League Soccer, he has reached double-digit goals just once in his career (a 10-goal 2019 season) and boasts a career mark of 0.35 goals per 90 minutes. For Canada, that per 90 mark drops to 0.30.

Canada does still have talent on the wings, as Tajon Buchanan has had an inspired tournament in Davies' place and Junior Hoilett has the quality to create a goal out of nowhere, but they will find it difficult to create much of anything against Mexico. 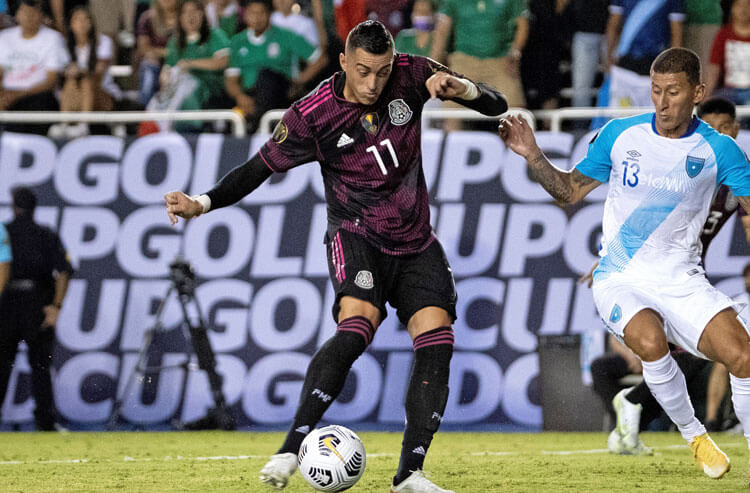 Mexico vs Canada Gold Cup Tips and Predictions: Come at the Kings
Provided by