Cross-city rivals and Premier League titans square off Sunday as Manchester City continue their title defense and Manchester United look to keep their momentum rolling. One thing's for sure: Count on scoring.

The city of Manchester will either turn red or blue on Sunday when Manchester City and Manchester United square off for city supremacy at the Etihad Stadium. The Cityzens will be looking to keep within touching distance of leaders Arsenal, while the Red Devils are hoping to get their third big-six toppling of the early season.

Can United find a way to neutralize the red-hot Erling Haaland, or will City run rampant against their rivals? Find out in our Manchester City vs Manchester United EPL picks and predictions for Sunday, October 2.

Pep Guardiola has finally solved his striker issue. For the first time since taking over at Manchester City, he has a true, reliable focal point for his interchanging attack, as Erling Haaland has taken the Premier League by storm. His 11 goals in seven matches leads the league, and he has a chance to become the first player in Premier League history with three straight home hat-tricks should he pull the feat off this weekend.

That’s not to say it’s been a flawless start for the reigning champions. City fell behind 2-0 to Crystal Palace at home, having to storm back for a 4-2 win. To boot, the side has already suffered draws at Aston Villa and at Newcastle, which sees them currently sitting second in the table. They’ve also kept just four clean sheets through seven matches, which is pretty solid, but nowhere near what Pep demands.

Manchester United have rebounded from a humiliating start to the campaign, having been outscored a combined 6-1 by Brentford and Brighton. The benching of Harry Maguire has been key in a defensive turnaround that has seen the Red Devils concede just two goals in four matches, including big wins over Liverpool and Arsenal at home. The return of form for Marcus Rashford was also a welcome sight for United fans, and he was named Player of the Month by the Premier League this week.

United were playing terrific football and rue the timing of the break, with the side having not played in almost a month due to the death of Queen Elizabeth and the international break. That said, it might have been a blessing in disguise, as striker Anthony Martial is now fit and could feature on Sunday. In the preseason, Erik ten Hag’s system was working best with Martial at the point of the attack. His return would give the newly-awarded Premier League Manager of the Month a bevy of options to go along with Rashford, Antony, and Jadon Sancho on the wings.

City’s slip-ups this season came against teams with the ability to counter-attack with pace, which Newcastle and Crystal Palace utilized to their advantage. It’s also how Dortmund were able to score on them in City’s 2-1 Champions League victory just before the break. Meanwhile, United’s back line looks much better right now with Raphael Varane and Lisandro Martinez, but expecting any defense to stop Haaland right now is a tough task.

I fully expect this match to be exciting and entertaining, just as United’s other matches against big six sides this season have been. I also expect it to follow the same pattern of their matches against Liverpool and Arsenal, with them sitting back and hitting on the break. Given City’s issues against teams employing that tactic this season and the firepower on the pitch, I love both teams to find the back of the net with three or more goals scored on the day.

Manchester City are heavily favored in this match for a reason. They’ve won three of the last four meetings between these sides, and are in fine form. That said, it’s important to note that in the last five Premier League meetings at the Etihad, Manchester United has actually won three times.

There hasn’t been a draw between these two sides in any competition at the Etihad in the last six meetings. Furthermore, there’s been just one draw between them in any match, anywhere, in their last 14 fixtures.

City have yet to lose this season in the Premier League, and have won all but three matches in all competitions. Meanwhile, United have won five of their last six following a difficult start, with their only defeat in that run coming away to Real Sociedad in the Europa League. For those who believe United have a shot at a result, the double chance offers solid value in this match.

City has gone Over the total by themselves in multiple matches this season. Haaland’s form has been red hot, and it has enabled the Cityzens to score three or more goals in five of their seven Premier League matches this season. The other two matches where they failed to do so saw just two total goals scored in the contest.

Manchester United have been involved in far fewer shootouts this campaign. The Red Devils have scored multiple goals in just two of their six Premier League outings–both against Big Six sides Liverpool and Arsenal. However, their away form of late has seen a pair of 1-0 wins over Southampton and Leicester as they’ve played much cagier.

The return of players from the international break tends to see defenses playing a bit sloppier, and City will be without John Stones who suffered injury while with England. The total for this match is elevated to 3.5 from the typical 2.5 and therefore the Under is the more likely result, but an argument could be made for either side.

It will be a beautiful fall afternoon in Manchester, with temperatures at kickoff hovering near 60 degrees and plenty of sunshine. There is no rain expected, and there will be a light breeze that should not impact play. 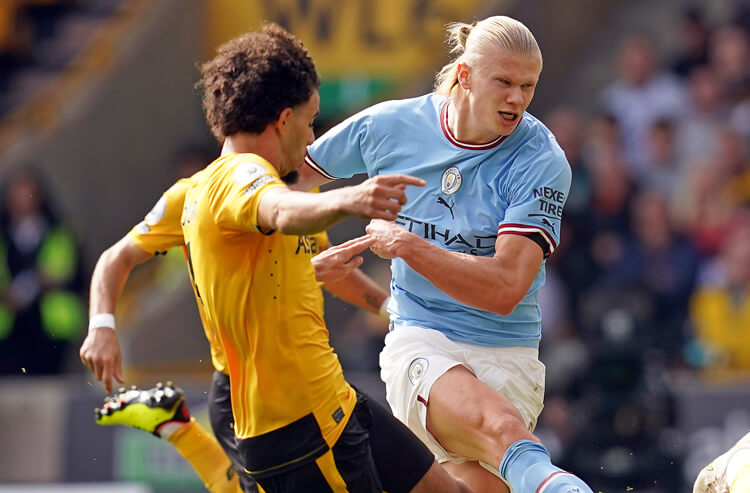