Saturday sees one of the most-viewed sporting events on the planet as this year’s Champions League final features Liverpool vs. Real Madrid.

Jurgen Klopp’s Liverpool might not have captured the Premier League title, but they can still win their third trophy of the season here. Meanwhile, Real Madrid could win Champs League glory to pair with their La Liga crown.

These are two of European soccer’s most dominant clubs with 19 European Cups between them — but who’ll come out on top on Saturday? Don’t miss our Liverpool vs. Real Madrid picks and predictions to find out exactly who.

If you're signing up for a new sportsbook for some Champions League betting, here are two of the best bonuses* available:

It’ll have been a warm day in Paris by the time this game starts. Temperatures will be in the mid-60s with some clouds.

Saturday sees the Champions League Final, the showpiece event in club soccer. This year’s edition takes place at the Stade de France in Paris, having been moved from Russia following the outbreak of the Ukraine war. On Saturday we’ll see Liverpool face Real Madrid, not only is it a clash between two of the most successful clubs in European history, with 19 European Cups between them, it’s a re-match of the Champions League final of 2018.

For a lot of time in Sunday’s final Premier League slate, it looked like Liverpool could end up stealing the trophy from Pep Guardiola until Man City pulled off one of the great comebacks to steal their glory. Meanwhile, Real Madrid romped to another La Liga victory, finishing 13 points clear of hated rivals Barcelona.

It’s fair to say that these clubs have had very different routes to this Champions League final. Liverpool have, with the greatest respect, had a fairly easy path. In the Round of 16, they beat Inter Milan 2-1 on aggregate, before beating Benfica 6-4 across two legs in the Quarter Final and then topping Villareal 5-2 to reach the final.

Real Madrid have, contrastingly, beaten some of Europe’s finest to reach the Champions League final, slogging through a nightmare lineup of PSG, Chelsea, and Man City to get here. Real Madrid have really earned their spot in Paris, and while they’ve been outplayed by their opposition for large parts of all six knockout games, they’ve had the mental strength to hold on and snatch victory from defeat.

In Saturday’s showcase, we’re going to see two of the most exciting teams on the planet meet with both Jurgen Klopp and Carlo Ancelotti sending out their teams in a 4-3-3 formation. Liverpool are suffering from some injury doubts, but I’m expecting to see both Thiago and Fabinho named in the midfield alongside Jordan Henderson — it would be a big loss if either didn’t make it.

Liverpool’s defense writes itself apart from Virgil van Dijk’s partner, who I expected to be Ibrahima Konate. Liverpool fullbacks Trent Alexander-Arnold and Andy Robertson will be key to their success and the battle between Alexander-Arnold and Vinicius Junior is likely to be one of the most exciting on the day.

That Liverpool front three is fearsome, and now that Luis Diaz has cemented his spot alongside Sadio Mane and Mohamed Salah, it’s time for them to deliver. With their unique blend of directness, pace, and guile, they’re going to ask questions of Real Madrid’s backline, especially the 32-year-old Nacho.

Nacho looks likely to start alongside Eder Militao with David Alaba still questionable. Militao has been incredible this season, dominating in the air and being adept at bringing the ball out from the back and into the feet on Real’s famous midfield three. That midfield three of Toni Kroos, Luka Modric and Casemiro will be central to Madrid’s hopes. It’s no secret that they’re getting older, and looked lost at times against PSG’s pace. One thing Liverpool has in their favor is speed. As we know, speed kills, and I’m concerned that Liverpool will be able to outrun and overrun them for 90 minutes.

Benzema is the main man for Real Madrid and arguably the world’s best player on form alone, but it’s going to be Vinicius Junior, not Benzema, who will be key to Real’s attack. If the young Brazilian can attack the spaces that Alexander-Arnold leaves on the right side of defense, then it could cause opportunities for either himself or Benzema to find the net.

When all is said and done, I find it hard to see anybody but Liverpool lifting the trophy in Paris. This is an elite Liverpool team who have shown time and again that they’re capable of terrifying any team they face. You have to respect the way in which Real Madrid have reached the Champions League Final and the mental strength that they’ve shown, but they’ve been the inferior team in five of the six knockout games they’ve played and ultimately they can afford to do that against Liverpool.

Man City are a better team than Liverpool — the Premier League table doesn’t lie across 38 games — but as the one-point difference shows, it’s so incredibly tight. For my money, it’s Liverpool and their speedy, dynamic attacking style that are the worst fit for Real Madrid and I’m expecting them to do better than City did. You never know exactly how big finals will go, with some matches tending to be played quite conservatively, but this Liverpool team aren’t set up for that and you can be certain they’ll be going to Real from the first whistle.

We’re going to see goals on Saturday, that’s a given. There have been Over 2.5 goals in nine of Real Madrid’s past 11 Champions League games. Not only that, but in eight of their last 10 in this competition, Los Blancos have scored at least two goals themselves. Liverpool have been prevalent goalscorers in the Champions League too, scoring two or more goals in 11 of their past 12 in the competition.

While it’s not a direct comparison, it’s worth noting that 63.2% of Liverpool games in the Premier League this season hit Over 2.5 goals. That number was 60.5% for Over 2.5 goals in

With the likes of Salah, Mane and Benzema on the pitch there are going to be goals, back Over 2.5 at a generous -125.

This truly is a brilliant Liverpool side. They have a great goalkeeper, one of the best central defenders on the planet in Virgil van Dijk, two devastating fullbacks, a strong midfield and one of the fastest and scariest attacking threes in the world game.

Not only do Liverpool win this match, I think there’s a strong chance that they could even run away with it. You can bet on Liverpool -2 on the spread at +750 but that’s probably a bit too big of a handicap. Instead, I’d recommend betting Liverpool -1 at +280, which is a great price for a team who have shown so much evidence of their incredible attack. 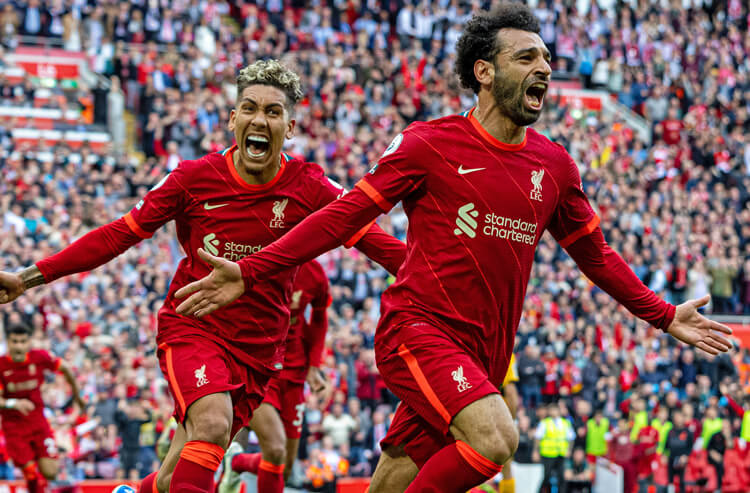