The USA had another monumental win over their biggest rivals on Friday but the momentum from that victory may not last, as they head into a tricky matchup with Jamaica. Find out if the USMNT can make it two wins in two with our picks.

The USA will look to stay on top of CONCACAF World Cup qualifying on Tuesday, as they travel to Kingston to take on Jamaica.

With a third win over Mexico in 2021 on Friday, by the famous dos a cero scoreline, the USMNT overtook their rivals for the top spot in the group and handed them their first loss of qualifying. Jamaica, meanwhile, got a result for a third consecutive game with a 1-1 draw against El Salvador as they look to claw back into contention after a terrible start.

Here are our free soccer picks and predictions for Jamaica vs. USA, with kickoff on November 16.

It's expected to be a hot and humid day in Kingston on Tuesday. Temperatures at kickoff are forecast at 85 degrees Fahrenheit, with 70 percent humidity. Scattered rain and thunderstorms are also in the forecast.

Jamaica are finally getting a taste of the team they envisioned when qualifying began. In an effort to return to the World Cup, the Reggae Boyz pursued a list of dual nationals playing abroad and were able to secure the international services of several high-level talents. Most notable of all was West Ham striker Michail Antonio, who has become one of the Premier League's most clinical strikers in recent years.

Antonio was expected to help complete an already threatening front line, with Shamar Nicholson a towering target man for him to play off of and winger Leon Bailey one of the most skilled attackers in the region. For a number of reasons, Jamaica's plan was slow to come together but the squad they have for this window is their strongest yet.

That nearly led to a win on Friday, as Antonio scored his first goal for Jamaica to give his team the lead, only for Jamaica to surrender an equalizer in the final minutes. While the result was devastating for Jamaica's qualifying campaign, the hope they had in a revitalized squad played out during the second half. Jamaica should be expected to play a full-strength 11, including Antonio, from the first whistle against the USA.

Just as Jamaica are starting to click in time for the second half of qualifying, it appears the USMNT are as well. Key figures are returning to form and health, and the 2-0 win over Mexico was possibly the most decisive game they've played in 2021 — though slow starts continue to plague the team. However, it isn't all positive for the U.S. coming out of their win over Mexico.

Weston McKennie, who was superb and is currently in the form of his life for Juventus, will be suspended due to yellow card accumulation. While the USMNT do have depth in center midfield, there's simply no replacing the quality they have when McKennie and Tyler Adams line up alongside one another.

Furthering their woes was the late red card picked up by Miles Robinson, leaving the U.S. to juggle their already depleted backline, after John Brooks and Sergino Dest were left out of the squad. Robinson's suspension couldn't come ahead of a worse matchup, with his replacement tasked with defending Bailey on the wing as well as Antonio, who makes very intelligent runs down the channel and has a different level of strength on the ball.

The USMNT are finding their footing after some worrying performances. However, so too are Jamaica, and they have the added benefit of home advantage. The U.S. are a far different team on the road than at home, especially in qualifying. The previous, unsuccessful qualifying campaign saw them earn just 3 points in five away games, while three away games in this cycle have earned them just four points. The USMNT have the talent to get a result on the road but the conditions aren't favorable for a win.

We're headed back to the Ricardo Pepi well in this one, after the 18-year-old didn't find the back of the net against Mexico. Pepi still has a fantastic record in his young international career, with three goals in four starts and an average of 0.78 goals per 90 minutes. Pepi's best moment for the national team came in October, when he scored a brace within 15 minutes against this same Jamaica side in Austin.

Pepi will have a much better supporting cast to aid his goalscoring efforts in this matchup against Jamaica. Brenden Aaronson, who he links up well with, will either start or make way for Christian Pulisic, who was the hero on Friday and is the USMNT's best attacking player. On the other side, Timothy Weah should retain his starting place after performing as the team's best player against Mexico.

With perhaps Gio Reyna's absence the only missing piece, Pepi will be at the head of the USA's strongest possible front three. In a matchup he's previously scored twice in, the teenager is in a perfect position to add to his goalscoring tally. 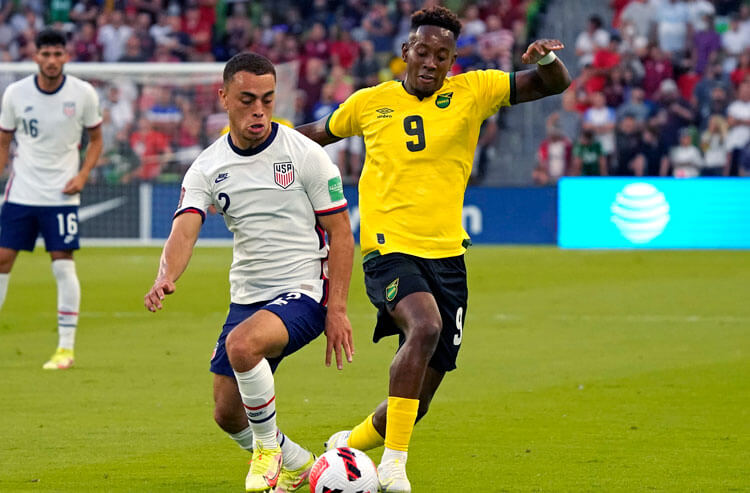 Jamaica vs USA World Cup Qualifying Picks and Predictions: USMNT Falter on the Road
Provided by