Canada earned a famous draw on the road against Mexico in October and will now welcome them to the frozen cold of Edmonton. Find out why the last remaining undefeated team, Canada, will stay that way with our soccer betting picks.

CONCACAF World Cup qualifying will cross the halfway mark on Tuesday, and in Edmonton, we'll see the last remaining team undefeated team take to the pitch against the region's heavyweights.

With a monumental 1-0 win on Friday over Costa Rica, one-time World Cup participants Canada have gone seven games unbeaten and remain in an automatic qualification spot for the 2022 World Cup. Among those seven games was a famous draw in Mexico City, but they'll face a tough test trying to get a result against El Tri for a second time in as many games.

Here are our free soccer picks and predictions for Canada vs. Mexico, with kickoff on November 16.

It will be a freezing night in Edmonton on Tuesday, with temperatures expected around 20 degrees Fahrenheit at kickoff and dropping further during the game. Snow showers are forecast during the afternoon prior to kickoff, which could further impact an already frozen pitch.

For a third time this year, Canada and Mexico will face off with favored Mexico hardly a no-brainer pick to be victorious.

The first meeting, in July, saw the Canadians push Mexico to the verge of extra time in the Gold Cup semifinal only to lose a heartbreaker, with Mexico scoring in the eighth minute of injury time. For as impressive as that was, it would be topped in early October when Canada went into Estadio Azteca in Mexico City and earned a draw, the first for Canada in Mexico City since 1980 and only the 11th time a team has ever taken a point from the hosts there in World Cup qualifying.

So, Canada's belief will be understandably high ahead of Tuesday night. Furthering that belief is that Mexico just lost for the third time in a competitive fixture this year, falling 2-0 to the USMNT on Friday. Mexico's current attacking talent is outstanding but there have been holes shown this year, with a loss to Wales in a friendly with a relatively good squad, three losses to the U.S., and draws against Canada and Panama.

Obviously, it's the draw to Canada that is most relevant here, and there is plenty to take from it. In that game, Canada's midfield not only held its own but controlled the game with the midfield three of Stephen Eustaquio, Mark-Anthony Kaye, and Jonathan Osorio working brilliantly to recover the ball, cut passing lanes, and drive forward in possession. Osorio, in particular, was dominant in that one as he drove forward with the ball and will be crucial here, with conditions not great for intricate passing patterns.

Canada's bevy of attackers caused so many problems against Mexico in October, too, as they created eight shots and drew several fouls in advantageous positions. In possession, the ability of Tajon Buchanan and Alphonso Davies to draw defenders into space will be huge here, after Timothy Weah appeared to be the best player on the pitch doing the same against Mexico on Friday for the USMNT. Mexico's desire to play with the ball will play into Canada's attacking strength, too, as they are excellent in counter-attacks.

In defense, Canada are unlikely to be overwhelmed after doing a good job containing Mexico's attack in October. Alistair Johnston effectively marked Raul Jimenez, who connects everything for Mexico, out of the game, while versatile fullback Richie Laryea was deployed on the left to contain Tecatito, and likely will be again.

Ultimately, at every level of the pitch, Canada matchup well against Mexico, and they have proven as much twice already this year. There's deference to the talent and experience of Mexico, of course, but between the way in which Canada matchup against them and the genuine home advantage — not just the crowd but the 90 minutes of experience playing on this frozen turf — they should be expected to get another result against El Tri.

A testament to Canada's technical ability and talent in attack, they had moments of brilliance going forward against Costa Rica on Friday despite a frozen turf holding up the ball and making it considerably more difficult to play well-placed passes. Jonathan David's goal was the product of the instinct and composure that has him atop the Ligue 1 scoring charts, but Canada could have scored multiple goals against Los Ticos.

Canada's attack should be expected to be even better against Mexico, with 90 minutes of game time plus several more days of training on a unique and difficult playing surface under their belt. They'll have increased options, too, as striker Cyle Larin should be available to start after he dealt with an illness ahead of Friday's win.

Though David got the goal, Larin may be preferred up top on Tuesday as his ability to hold up the ball and bring Davies and Buchanan into the play would be advantageous in the expected conditions. And, as mentioned, Osorio's ability to drive forward through the middle from midfield gives Canada a dynamic they only otherwise have when Davies drifts inside and picks up the ball.

Canada will need the uptick in attack, too, because they are sure to be tested a lot more than they were on Friday. Regardless of the opponent, Mexico want to play in possession, and the front three of Tecatito, Chucky Lozano, and Jimenez can devastate at a moment's notice. Jimenez is a world-class goalscorer who makes highly intelligent runs, and Lozano's ability to play a ball out of nowhere complements the striker perfectly.

For as toothless as Costa Rica were for the most part on Friday, there were a handful of nervous moments in defense for Canada, and not necessarily because of their own defending. The frozen conditions make reading the ball incredibly difficult, as it becomes prone to odd and unpredictable bounces.

Just as they did in Mexico City in October, Canada and Mexico will both find the back of the net in a tightly contested draw. 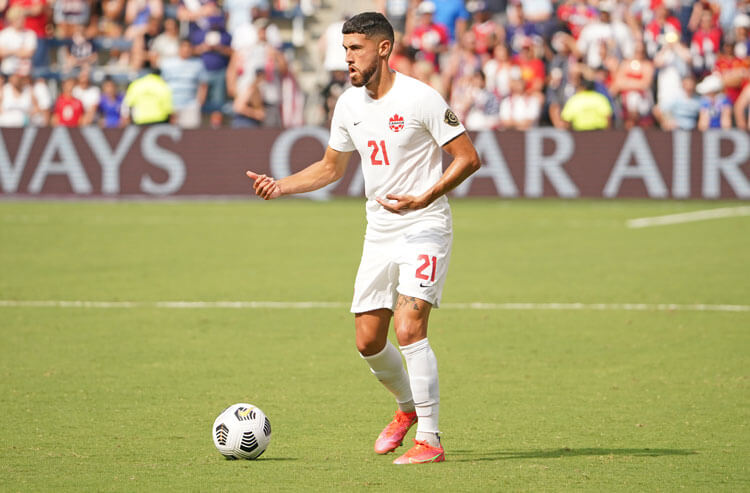