Italy have just one player remaining from their dramatic Euro 2020 victory. That transitioning Italian side now heads to hostile German territory, leaving us to lean on Hansi Flick's men at home — we explain further in our betting picks below.

Germany can leapfrog Italy with a victory at Borussia-Park on Tuesday evening and, depending on the result between England and Hungary, can take sole possession of first place in Group 3.

Hansi Flick’s side, currently in third place and a point adrift of Hungary, are still looking for their maiden Nations League victory after drawing each of the first three matches 1-1. Italy are in first with five points, a point ahead of second-place Hungary.

Keep reading our Nations League picks and predictions to see how this one plays out.

Clear skies and a perfect 22 degrees are expected for the duration of Tuesday’s match in Monchengladbach, Germany.

Germany haven’t lost since Flick took the managerial helm in August 2021, a run of 12 matches. While their unbeaten streak dates back to the 2-0 loss against England at Euro 2020, Die Mannschaft have struggled lately to win matches.

Four 1-1 draws on the bounce, including a rather listless, unconvincing match in Hungary on June 11, has Flick wondering what his side needs to do to secure an elusive victory.

On the topic of struggling to get across the line, Germany has won just a single match against Italy in nine previous encounters. That victory came via penalties in the quarterfinal of Euro 2016. Six of those nine contests ended in draws.

In their last contest, the bitter rivals played to a combative 1-1 draw in the opening Nations League fixture at Bologna’s Stadio Renato Dall’Ara on June 4. Based on recent proceedings and historical head-to-head evidence, backing the draw, which bet365 has at +260, would be the logical choice.

However, there are a couple of key factors tipping the scale in Germany’s favor. Die Mannschaft have lost just two of their last 45 home contests. Germany acquit themselves in an entirely different fashion on home soil. They press higher up the pitch, retain possession extremely well, and create substantially more chances in front of their raucous partisan supporters.

Germany, had they not conceded a hare-brained penalty in the 88th minute against England, would have secured all three points in their opening Nations League home contest last week. Germany’s home advantage is further enhanced in light of the experimental lineup Roberto Mancini will almost certainly employ.

That list alone shows where Mancini’s priorities lie. The future is now for Mancini, who is using the Nations League as a platform to evaluate younger players while offering burgeoning talent the opportunity to gain invaluable first-team experience at an elite international level.

Nicolo Barella, the only outfield player remaining from Italy’s Euro 2020 triumph, is available for Tuesday’s encounter and might come back into Mancini’s starting 11.

Italy’s recent match against England, a 0-0 stalemate played in front of no fans at Molineux, represented the most pronounced shift in Mancini’s Nations League strategy. Mancini’s emphasis on seeing what the future has in store will allow Germany to further leverage their home advantage and secure all three points.

Just one of the six combined matches these sides have played thus far in the Nations League resulted in the Over. Italy are coming off a scoreless stalemate against England, while Germany equalized in the ninth minute against Hungary, three minutes after conceding the opener.

That match, played in Budapest, showed early promise of an increased goal output but was devoid of goals after the nine-minute mark.

There should be goals in Tuesday’s encounter, just not enough to break into Over territory.

Germany are looking to score two goals for the first time during Nations League play, which, based on their recent offensive struggles, seems slightly improbable at first glance.

However, Flick’s side is playing at home against a fresh-faced Italian side, increasing the likelihood of a two-goal outburst.

For the first time, Italy’s youth will play as a collective in a frenzied, hostile environment. The empty stadium at Molineux against England didn’t test their resolve the way Monchengladbach’s intimidating setting will.

Jonas Hofmann, who has scored Germany’s last two goals, is in ruthless form and should yet again provide the home side with a formidable attacking option. 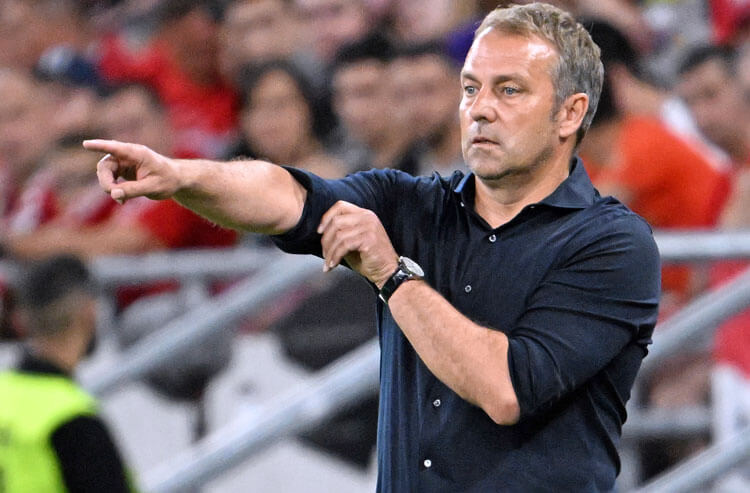