Ukraine lost a 3-2 thriller to the Netherlands to begin the Euros but now get North Macedonia. Can Ukraine get a badly needed result? Check out our tips and predictions for Ukraine vs. North Macedonia.

The two losers in Group C's opening games will meet in matchday two, as Ukraine takes on North Macedonia in Bucharest.

Ukraine went toe-to-toe with the Netherlands only to fall 3-2 after leveling it up, while North Macedonia made their major tournament debut with a 3-1 loss to Austria.

Can either of these two sides take all three points and keep their Euro journey alive? Check out our tips and predictions for Ukraine vs. North Macedonia.

Ukraine and North Macedonia will see stormy conditions in Bucharest on Thursday, with thunderstorms and a 75 percent chance of precipitation, while temperatures are expected to be around 75 degrees Fahrenheit.

One of the headlining games in the first matchday of the group stage delivered, with Ukraine falling to the Netherlands 3-2 in a thrilling match. Ukraine entered the tournament with a reputation for playing an expansive style and they did just that in coming up short in Amsterdam.

While Ukraine ultimately couldn't hold onto what would have been a superb 2-2 draw, they now have the most challenging group game behind them and could take six points from their last two group stage games. That starts on Thursday against a North Macedonia team that performed admirably against Austria in their major tournament debut.

While North Macedonia can take pride in not completely sitting back and absorbing pressure against Austria, as we've seen other heavy underdogs do in the tournament, they didn't create much at all when they went forward. Their lone goal came from a comical series of mistakes from Austria and, despite that goal, they finished with an xG of just 0.78.

Just as North Macedonia was outclassed by a good-not-great Austria side, Ukraine has more than enough talent to get by in this one.

After Ukraine legend Andriy Shevchenko took over as manager of the national team, he began to evolve the team into a more attacking, expansive side. That development worked quickly, as they averaged over two goals per game in Euro qualifying and won their group, taking four of a possible six points off Portugal in the process.

Those two matches against Portugal, as well as a draw earned in Paris in a World Cup qualifier against France this year, signaled another development for Ukraine. After cruising through the majority of qualifying with a three-man backline and strong attacking intent, they played a deeper, more defensive squad with a five-man backline, giving them different options depending on the level of opposition.

The five-man backline returned against the Netherlands, and despite sitting deeper, Ukraine showed off their attacking talent in a two-goal performance. Against North Macedonia, we should see them go back to a three-man backline and play much higher up the field.

With greater emphasis on attack, we should see another high-scoring game for Ukraine. 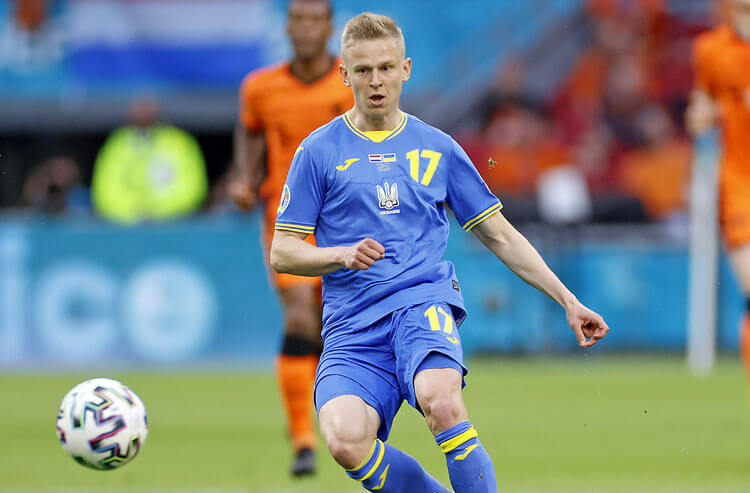