Raheem Sterling gave England the win against Croatia to begin the Euros, scoring in a 1-0 win. Can Sterling repeat his heroics against Scotland? Find out with our England vs. Scotland tips and predictions.

The oldest rivalry in soccer will see a grand stage on Friday, with heated rivals Scotland and England clashing in Group D play. Nearly 25 years to the day when the two last played at a major tournament, at Euro '96, they will renew their rivalry.

England can all but secure progression to the knockout stages with a win, while Scotland needs a result to keep their Euro hopes alive. Who will be victorious in the latest chapter of a historic rivalry? Keep reading for our England vs. Scotland tips and predictions.

Scotland and England, fittingly, are likely to be playing in the rain at Wembley. Around kickoff, there is a 95 percent chance of precipitation, with temperatures expected around 55 degrees Fahrenheit..

In their opening game of the Euros, not only did England avenge their loss to Croatia in the semi-final of the 2018 World Cup, but they answered the most pressing questions around their squad in 2021. England's midfield was masterful, dominant, and suffocating against Croatia, with Declan Rice, Mason Mount, and Kalvin Phillips continuing what had been an effective trio in the center of the park. Meanwhile, a surprising back four put on a calm, controlling performance while Croatia offered very little going forward.

Despite an unusually anonymous performance from captain Harry Kane, and Phil Foden drifting out of the game as it progressed before being substituted, England still finished with an xG of 1.54. England could have easily ended up with a 3-0 win over Croatia and that was without clinical finishing from Kane, and only turning to Marcus Rashford among a ridiculous list of attacking options off the bench.

Scotland, for their part, actually finished with one of the highest expected goals of the opening round, at 2.31, in their loss to the Czech Republic. Dreadful finishing held Scotland out but with Che Adams likely to start up top on Friday, they will have a more natural finisher should they be able to create chances with any sort of consistency.

Unfortunately, it's difficult to imagine Scotland creating much of anything. England's high press will wreak havoc on Scotland's attempts to play out of the back, just as Croatia suffered. While Scotland will look to captain Andy Robertson as a key outlet too, on the left flank, he will find space rare. England consistently suffocated Croatia's attempts to play up the wing by shifting the No. 10, Mason Mount, out wide to cut off passing lanes. They can do the same to Robertson and Scotland's attempts to build an attack.

England have a massive talent advantage in defense, midfield, and especially in attack. With a tactical advantage, too, the Three Lions will punch their ticket to the knockout stages with a win over their oldest rivals on Friday at Wembley.

Raheem Sterling has been a stalwart in the England team for years, maintaining a starting spot whether he was tearing up the Premier League and earning Player of the Season honors or, more recently, out of form and on the bench for Manchester City. For the most part, Sterling has rewarded his country consistently when picked, but his inability to get on the scoresheet at major tournaments has been difficult to deny.

Sterling has scored 14 times for England in 50 appearances outside of the World Cup and the Euros, but his winning goal against Croatia on Sunday was his first in 12 appearances in major tournaments. Though he has scuffed a few chances in his previous tournament appearances, he was a locked-in starter in the 2018 World Cup because of his movement and willingness to make forward runs while Harry Kane dropped deep. His goal against Croatia was, really, a long time coming.

Luckily for England, he may not be waiting long for tournament goal No. 2. Sterling had a number of chances on goal against Croatia because of his movement off the ball and his ability to find space. With England pressing incredibly high and doing an excellent job of winning the ball back in threatening positions, Sterling was rewarded for his intelligence with scoring chances and, ultimately, a goal.

Scotland depends on their two outside center-backs in a back three to dribble out of the back and progress the ball. Those players are usually Scott McTominay and Kieran Tierney, however, Tierney missed Scotland's opening game with an injury (and is a doubt for Friday) and McTominay was shifted back into midfield.

Without adequate ball players in the back, Scotland will be susceptible to England's press and turning the ball over in dangerous areas. When that happens, Sterling will have already made his move into a goal-scoring position and with that elusive first tournament goal out of the way, he will not make a mistake. 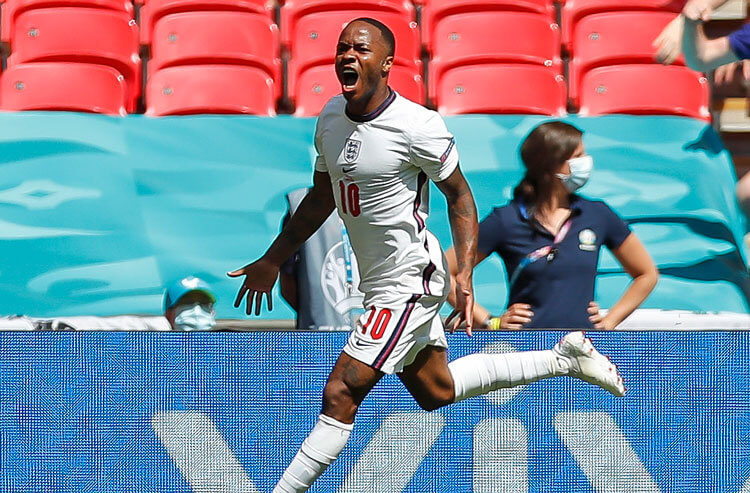