Chelsea vs Tottenham Picks and Predictions: Third Time's the Charm for Spurs

For the third time already in 2022, Tottenham and Chelsea will square off as Antonio Conte returns to Stamford Bridge. Chelsea took the first two to advance to the EFL Cup final but it's shaping up to be Spurs' day, as our EPL betting picks explain.

The Premier League betting slate will be highlighted on Sunday by a London clash between Chelsea and Tottenham, who will meet for the third time already in 2022, after the League Cup semifinal between the two.

Recent form has heightened the stakes at Stamford Bridge this weekend, as Spurs are just eight points behind Chelsea with four games in hand. In all likelihood, these two will be among a group of teams fighting for third and fourth in the table until the end of the season.

Find out who will get a potentially crucial result this weekend with our free soccer betting picks for Chelsea vs. Tottenham, with kickoff on January 23.

Sunday is expected to be cloudy in West London but there's still only a 10% chance of rain in the forecast. Temperatures at kickoff at Stamford Bridge are expected to be around 40 degrees Fahrenheit.

Even if Manchester City weren't pulling away and taking the title with them, Chelsea's once-bright challenge for the league this season has effectively died over the last six weeks. Between COVID and injuries, an underwhelming attack with a misused Romelu Lukaku, and a regressing defensive record, the Blues have faded from the top of the league.

Over the last nine Premier League games, Chelsea have won just twice and collected 11 points from a possible 27. In a vacuum, that's a mediocre return. For the Champions League holders and a team that was challenging for the title before December? It's shocking, yet perfectly representative of Chelsea's form. There's been no cutting edge and their season reached its nadir on Tuesday in a lethargic 1-1 draw against Brighton.

While Chelsea backslide into the fight for the Top 4 as opposed to the title, Spurs have fired back up under new manager Antonio Conte and look primed to finish in one of the automatic Champions League qualification spots. They miraculously snatched a win out of the jaws of defeat midweek against Leicester City, winning 3-2 after trailing 2-1 with the clock reading 94:52 played.

The stunning win maintained Conte's undefeated league record at the helm of Tottenham. In nine games in charge, Spurs have won six and drawn three for a superb return of 21 points from a possible 27.

That Conte's tenure coincides with Chelsea's poor form gives us a great foundation to work off of here. The points return in itself, 21 for Spurs compared to 11 for Chelsea, says a lot. The underlying numbers emphasize it further. Tottenham's expected goal differential over that span is +1.5, which is level with Liverpool's season-long mark and trailing just City's dominant production. In comparison, Chelsea's is +0.65 and buoyed by a string of toothless opponents during that stretch.

Everything points toward Spurs giving Chelsea a tough challenge here and, on form, they're the better side at the moment. However, we can't quite take the leap of faith and take them to win. Even amid Chelsea's poor stretch, they hung tough with Liverpool in a 2-2 draw and narrowly lost to City, 1-0. With this game taking place at Stamford Bridge, Chelsea's tired legs should be given enough of a boost to hang with Spurs and come out of Sunday with a point.

One of the most amazing things about Conte's brief tenure is the way he has sparked Spurs' attack. While it wasn't a huge surprise, Tottenham played in a shell under former manager Nuno, whose career as a Premier League manager was marked by some truly dull play.

In 10 games under Nuno, Spurs scored nine goals with an xG of 10.2 while sitting toward the bottom of the league in those metrics. In nine games under Conte, Tottenham have scored 17 with an xG of 20.9, already rising into the Top 5 in xG and Top 10 in goals as they've effectively doubled their attacking production.

Under Conte, Spurs have proven to be good for goals, scoring multiple goals in six of nine league games. That shouldn't change against Chelsea, who have kept just one clean sheet in their last nine games — against an unthreatening Wolves team — and are still without Edouard Mendy, their first-choice goalkeeper and one of the best keepers in the world.

On the flip side, even with an underperforming attack, Chelsea have only failed to score in two of their previous nine Premier League games (including against City) and have averaged an xG of just over 1.5 during that time. They've still been able to create chances and should be able to do so against Tottenham, who just conceded two goals midweek and have conceded over 1.0 xG in four of nine games under Conte.

While we couldn't quite muster the courage to take Spurs to win outright, this is a comforting fallback.

While Tottenham have been, on form, the superior team to Chelsea over the last six weeks, there are still reasons for pause. As mentioned, Chelsea have gritted out results during that span and Spurs are hardly overflowing with players capable of delivering the cutting edge compared to a team like City.

The advantage Stamford Bridge gives Chelsea is real, too. The Blues lost just five times at home in all of 2021, with two coming at the hands of unstoppable City, and the other three coming against Arsenal, Porto in the Champions League, and West Brom in one of the strangest games of last season.

Then there's the recent League Cup semifinal between these two. Chelsea won 3-0 over the two legs, with a 2-0 win at home followed by a 1-0 win in North London earlier this month. The first leg, in particular, was the worst performance of Conte's tenure as they looked completely unthreatening.

Chelsea were hardly in a different class, however, with the two engaged in an ugly 180-minute scrap. The second leg saw Spurs outplay Chelsea, with two penalties and a goal for Harry Kane wiped out by VAR, and they outproduced Chelsea in xG, 1.3-1.1, despite the Blues being the ones to score.

To put too much weight into a two-leg cup tie or Chelsea's home form would be to discount the greater sample size we have of these teams' form since December. Tottenham have consistently proven to be a strong team capable of getting results since Conte took charge. In the Italian's return to Stamford Bridge, he'll prove it yet again. 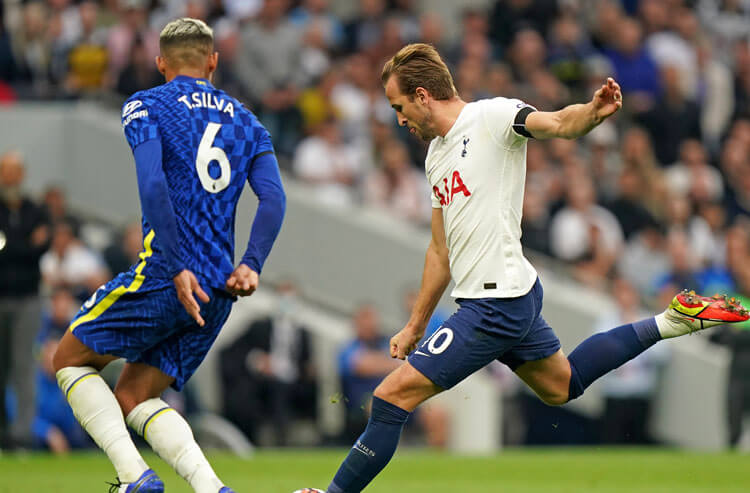 Chelsea vs Tottenham Picks and Predictions: Third Time's the Charm for Spurs
Provided by