Brighton vs Manchester City Picks and Predictions: Will Seagulls Soar Against Pep's City?

The Seagulls are soaring, but a date with City always runs the risk of a wing-clipping. Check out our Brighton vs Manchester City picks to see how to get the best betting value in Matchweek 9.

On a weekend where Man Utd and Liverpool renew their rivalry, it seems strange to say that heading into Matchday 9 in the Premier League, it’s Brighton vs. Man City which is the only game of the weekend featuring two sides in the Top 4.

Brighton have been a great addition to the Premier League in recent years, but this season, they’ve really taken a huge step forward. Despite their advances, will they be enough to stop Man City, arguably the best team on the planet right now? Read our Brighton vs. Manchester City tips and predictions to find out.

USA: Late action in the Premier League on Saturday will see Manchester City travel to the Amex Stadium to take on a high-flying Brighton team. Get a risk-free bet up to $1,000 when you register and play at TwinSpires. Claim Now

It’ll be mostly cloudy when these two kick off at 5:30pm local time on Saturday, with temperatures in the low-50’s. Luckily there isn’t much chance of rain and wind should be low, giving both teams the ideal conditions for their style of play.

It’s around the eight-game mark where the league table starts to really form and the big boys edge toward the top. Smaller teams with lucky starts and easy schedules begin to fall away as the cold weather sets in and the injuries start to pile up. The Top 6 has all of the regular names you’d expect, except for one, Brighton and Hove Albion.

Given that they’ve been in the Premier League since 2017, this small club still somehow feel like newcomers and not veterans. Over the past couple of years, they’ve become a joy to watch under Graham Potter, the former Swansea manager who has implemented a great attacking style of play and has been widely touted as the next great English manager. Many of us expected a big season from the Seagulls this year after they became darlings of statisticians last season, who told us that the club was scoring so far below xG (expected goals) that positive regression would almost certainly come. But nobody expected them to be this high now.

Brighton’s next two matches could be key to just how high they can finish in the Premier League, with an away game to Liverpool following this home game to the champions Man City.

Man City sit unusually low at third in the Premier League, but they’re only one point behind Liverpool and two behind leaders Chelsea, and recent performances look like those of a team who can be argued are the best in the world.

A midweek thrashing of Club Brugge in the Champions League, who they beat 5-1, will only have boosted confidence ahead of this game in the Amex. City are rightful favorites at -250 and with their injury list only really featuring Ferran Torres, they have a lot of world-class players in order to break down Potter’s Brighton.

It’s always a near-impossible challenge to pick the first-XI of a Man City team – such is the danger of ‘Pep roulette’ – but you’d probably imagine Jack Grealish in the front three, as well as Phil Foden, who, at 21-years, old looks like one of the most technically-gifted English players that we’ve ever seen. With Kevin De Bruyne behind them, there will be so many opportunities for goals, with Man City second in the league in xG behind Liverpool.

City come into this game undefeated in their past seven in the Premier League, having kept a clean sheet in six of those games. That’s going to be tough for any team to stop, let alone Brighton, who have drawn their past three, scoring only one goal in the process.

Odds of -250 certainly aren’t attractive, but when it comes to predicting this matchup, there is only one winner, and that’s Man City.

Given that Brighton have only notched one goal in their past three Premier League games, I was tempted to suggest Man City to win to nil, at odds of +120. I think that’s a great bet when looking at recent form, but because of the low price of my first pick, Man City to win, I’m going to suggest something bigger.

I’m taking the game to be tied at halftime before Man City win at fulltime, at odds of +300. Man City, despite being second in the league’s xG charts, are one of only two teams in the Top 8 who are currently scoring below their expected goals per game, the other being Brighton.

Man City have also failed to score in the first half of four of their previous five Premier League games. They clearly are great in front of goal, but when you take away their 5-0 victory over Arsenal, which came against 10 men for 55 minutes, it starts to look like they’re not as dangerous in front of goal as they were in previous seasons, perhaps why Pep Guardiola was so keen to sign Harry Kane.

At odds of +300 we’re getting a great price on two teams who haven’t scored a lot of first-half goals recently. Don’t miss these odds. 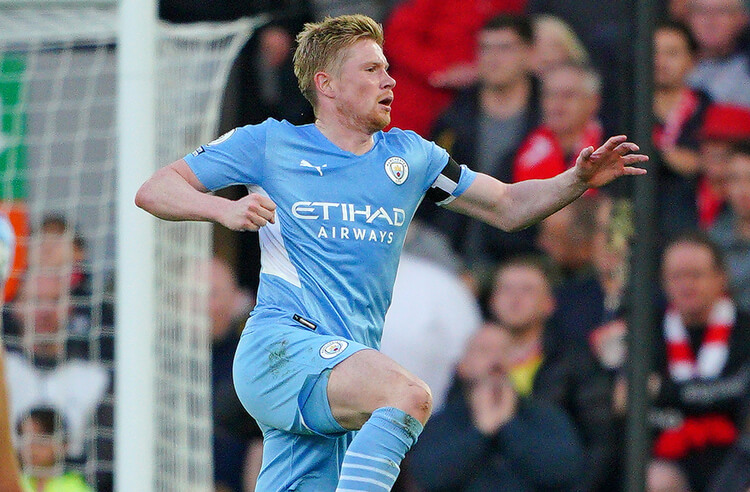 Brighton vs Manchester City Picks and Predictions: Will Seagulls Soar Against Pep's City?
Provided by