Brighton vs Chelsea Picks and Predictions: Tuchel’s Blues Bounce Back

Chelsea's season is a disappointment, especially after losing to Man City in their last game. In our betting picks, we expect them to come out victorious against an overachieving Brighton squad in what should be a defensive-minded, low-scoring affair.

Having fallen in defeat to Man City on Saturday, it’s more than likely that Chelsea’s Premier League title charge is beyond repair. They’re now 13 points behind the leaders but that won’t stop Thomas Tuchel from doing everything to ensure his team beats Brighton on Tuesday.

Will Brighton be able to thwart the European Champions and further boost the reputation of manager Graham Potter? Don’t miss our Brighton vs. Chelsea tips and predictions.

With temperatures around 40 degrees and very little wind and no rain, we should have great conditions for the game.

As reigning European Champions, there was real hope that Chelsea would mount a Premier League challenge this season. The signing of Romelu Lukaku, a proven goalscorer, only encouraged these hopes. And at the start of the season, we saw Man City, Liverpool, and Chelsea neck-and-neck in pursuit of the league title.

As the cold weather set in, and injuries began to mount, it impacted both Chelsea and Liverpool while Man City and their huge squad were unscathed. They’ve accelerated away into the distance and are currently 11 points ahead of Liverpool and 13 points ahead of Chelsea.

Thomas Tuchel will still hope that he could push for the Premier League title but in his heart of hearts, he knows it’s over. More pressing is the form of West Ham and Arsenal, who are six and eight points behind the West London team, respectively.

If Chelsea’s season feels like a slight disappointment then Brighton’s feels like a great success. Sitting ninth in the Premier League, their great results and growing acclaim around their style of play have resulted in Graham Potter being linked with every big job opening, most recently the manager's role at Everton.

What Potter has achieved at Brighton is sensational. The way he’s coached a Brighton team not blessed in talent, into a well-drilled, organized attack unit has been nothing short of incredible and he deserves a chance at one of the Premier League’s truly elite teams with clubs like Manchester United crying out for a young, hungry ideologue with a clear philosophy who can improve players through coaching.

It says a huge amount about Potter and his team that it’s a tough place to go on the road and Chelsea won’t be looking forward to this game. The African Cup of Nations has left Chelsea without their first-choice goalkeeper in Edouard Mendy but Kepa Arrizabalaga is a more than adequate backup. Brighton aren’t quite so lucky, with the absent Yves Bissouma a huge loss for the Seagulls. The Malian has been a revelation since arriving from Lille. His ability at screening the defense and breaking up play is a key part of Brighton’s game and, like his manager Potter, he is surely set to move to a bigger team at some point.

We’ll likely see Jakub Moder, Alexis Mac Allister, and Pascal Groß across Brighton’s midfield. On Friday, we saw Adam Lallana sit in the front of the Brighton defense, but he’s a doubt due to injury.

Chelsea, outside of their defense where they’re missing long-term absentees Ben Chilwell and Reece James, should be in good shape. Their backline is still so strong despite missing some key pieces and they’ll remain tight and compact.

We’re unsure how Tuchel will set up his Chelsea team with there being a possibility that he drops Lukaku after a disappointing game against Man City. Kai Havertz and Timo Werner are the most likely players to take his spot leading the line.

Both teams like to control possession but you’d expect Chelsea to be the ones seeing the majority of the ball. After struggling to keep control of the football against City, Tuchel could reintroduce Jorginho and Mason Mount to the lineup, both players who can help maintain possession and transition the ball forward.

With confidence in West London at a low, it’s essential that Chelsea bounce back with a win, which will be tricky against a very capable Brighton team. Chelsea should have enough about them to win the game but it’ll be close.

Chelsea might be the third-highest scoring team, but they still average just over two goals per game. Their strength in defense is well-known and they are also third in the rankings when it comes to the fewest goals conceded, behind Man City and Wolves.

Chelsea haven’t been great recently and in their past three games on the road, they’ve only been in one game with three or more goals. Incredibly just 20% of games at the Amex Stadium have seen Over 2.5 goals with eight of their ten home games going under, including each of the last five.

With Chelsea’s strong backline and the team’s recent struggles, the Under 2.5 goals market really leaps out and is worth playing even at -138 odds.

I’m confident that Chelsea will win this game but odds of -138 aren't tempting enough to back them. One thing I’m especially confident about, however, is that Brighton won’t score. Not once. Despite injuries to the Chelsea defense, they’re still one of the very best in the league and Thomas Tuchel is a coach known for keeping things tight at the back.

Brighton have only scored 21 goals in 20 games this season and their strike-force of Leandro Trossard and Neal Maupay will struggle against the likes of Antonio Rudiger and Thiago Silva. With that in mind, the real value on this game looks to be backing Chelsea to win and Brighton not to get a goal, which you can get at odds of +175. 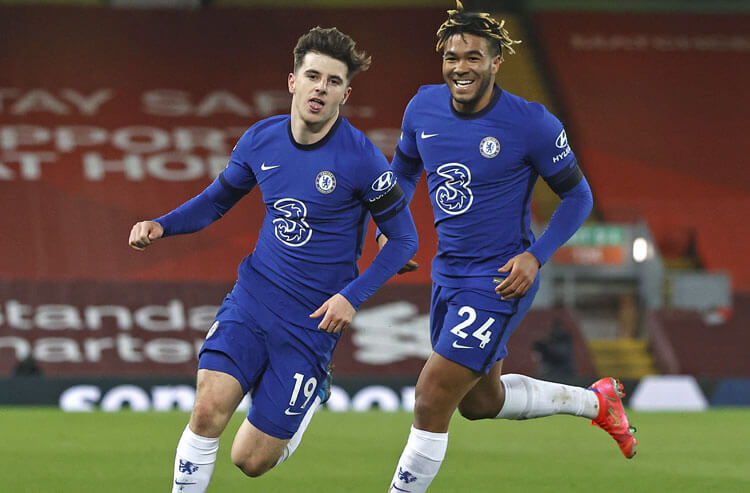 Brighton vs Chelsea Picks and Predictions: Tuchel’s Blues Bounce Back
Provided by