Aston Villa vs West Ham Picks and Predictions: Antonio to Give Villa a Halloween Scare

Two clubs trending in different directions face a pivotal game for somewhat different reasons this weekend. Both will have to dig deep, but find out which one makes for better EPL betting value with our Aston Villa vs West Ham picks.

The final game of the Premier League slate on Sunday sees Aston Villa welcome West Ham to Villa Park. Villa are struggling in mid-table and on a three-game losing streak, while their visitors West Ham are riding the crest of a week, entering the weekend in fourth spot in the Premier League table and fresh from knocking Man City out of the Carabao Cup.

This is an important game in the seasons of both teams. Aston Villa need to ensure they aren’t pulled into a relegation battle, and West Ham need to continue their hunt for a Champions League spot. Check out our Aston Villa vs. West Ham tips and predictions.

USA: Late action in the Premier League on Sunday will see West Ham travel to Villa Park to take on Aston Villa. Get a risk-free bet up to $1,000 when you register and play at TwinSpires. Claim Now

The game should see good conditions, with no rain, only clouds and temperatures around 52 degrees Fahrenheit when this game kicks off mid-afternoon local time.

Aston Villa: None
West Ham: None

It’s been a brilliant start to the season for West Ham. Many, myself included, thought that last season’s successes were helped by empty stadiums, but the return of fans hasn’t negatively impacted the team at all, they’ve really rallied around David Moyes and his squad.

West Ham entering the weekend fourth in the Premier League table with five wins, two draws and two defeats is a great achievement for this side. As was their victory over Manchester City in the Carabao Cup midweek, which saw City lose their first game in that competition since October 2016.

Meanwhile, Aston Villa enter this gameweek sitting 13th in the league, with only three wins to their name and on a run of three straight losses It was always going to take them time this season. You can’t lose a player of Jack Grealish’s quality and get over it quickly, especially when you need to integrate a number of new signings into the team. They’ve had a number of injuries this season, but with those players getting back into the side it’s essential that Villa’s results start to improve, or Dean Smith could start to come under increased pressure.

Can Villa get back to winning ways this Sunday against the Hammers? It’s unlikely, in my view. This West Ham team are strong and resolute and made from the same strong stuff as their manager David Moyes. Their record on the road has been brilliant, they’re undefeated in their last seven, as is their recent record against Aston Villa, who haven’t beaten them in their last seven attempts.

West Ham’s built on a strong core, something we’ve seen from David Moyes throughout his career. Kurt Zouma and Angelo Ogbonna have formed a good partnership in the center of defense, and they’re well protected by Tomas Soucek and the excellent Declan Rice, who has taken a leap forward and is now among the best at his position on the planet. Moyes sets the team up in a 4-2-3-1 and, on top of that strong core, is their attack spearheaded by Michail Antonio, who has scored six goals in eight league games this season.

Dean Smith needs to make decisions about his team soon. Firstly, will they go back to playing four at the back, something they did well with previously? Secondly, he needs to work out which of his attacking talents will make the team. Danny Ings was a good signing, but so far, he hasn’t clicked when playing alongside Ollie Watkins.

Villa haven’t had issues in front of goal this season, with only seven teams outscoring them. Their real issue has been at the other end where they’ve become too easy to score against. The West Ham defense is strong, but it wouldn’t be a shock to see Villa get a goal. Their problem will be that the Hammers are likely to score once, and probably more, against them. We’ll be taking West Ham to win, who are great value at +145.

We’ve already mentioned Michail Antonio and his prolific goalscoring record this season, with six in eight in the league. Over the two previous seasons, he’d started to look dangerous in front of goal, scoring ten in 26 and 24 games, respectively, but now he’s reached another level.

Antonio blossoming into one of the league’s best strikers has come late in his career — had it been earlier, he’d almost certainly have got capped for England, who he long hoped to play for before turning his allegiance to Jamaica. Despite the nature of the game becoming more technical, it feels like Antonio is a real throwback.

It wouldn’t be fair to say he isn’t technical – he has fantastic ability – but it’s his physical traits and his intelligence that take his game to the next level. He’s so strong and can bounce defenders off him when he uses his speed and directness to attack. His reading of the game has got better and better each season and his special awareness and movement has developed hugely. At the age of 31 he’s become the real deal, a player who terrifies every defense in the league and will give Aston Villa defenders the biggest scare of Halloween.

He comes into this game fresh, having not taken part in the win over Man City, which should be a concern for Dean Smith. A refreshed Antonio will be the main outlet and focal point of West Ham’s attack. At odds of +550 he’s the second-most-likely player to score first according to the bookies, who put Villa’s Danny Ings ahead of him, but in my view, that’s wrong. Antonio is the man when it comes to West Ham and given his goalscoring run, he needs to be backed to open the scoring on Sunday. 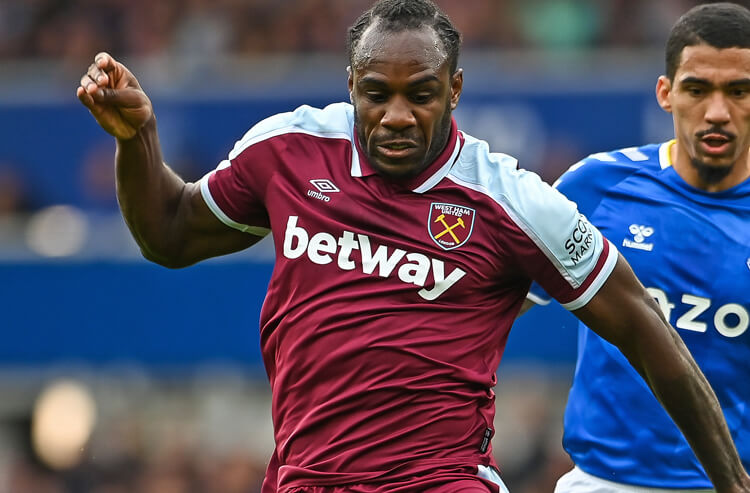 Aston Villa vs West Ham Picks and Predictions: Antonio to Give Villa a Halloween Scare
Provided by