Wolverhampton vs Everton Picks and Predictions: All Equal at Molineux

Just a point separates Everton and Wolverhampton in the table so far this season, and the two clubs share similarities in their style of play. How will that factor into Premier League betting here? Find out with our picks and predictions.

The weekend of Premier League betting comes to a close at Molineux, where Everton limp in to face Wolverhampton after suffering one of the most stunning defeats of the season a week ago.

Despite the Toffees' staggering loss last week, they entered the weekend a point up on Wolves, who are undefeated in four straight. Both clubs are firmly top-half quality and they should produce a compelling match on Monday to finish the weekend.

Here are our free picks and predictions for Wolverhampton vs. Everton.

USA: Premier League action on Monday will see Everton travel to Molineux Stadium to take on Wolverhampton. Get a risk-free bet up to $1,000 when you register and play at TwinSpires. Claim Now

Showers on Monday in Wolverhampton will stop ahead of kickoff, leaving Everton and Wolves with cloudy conditions and temperatures around 45 degrees Fahrenheit at kickoff.

Wolves and Everton share considerable similarities and, through nine games this season, have very little separating them. Under manager Rafael Benitez, defending will take priority for Everton as they set up in a 4-2-3-1 that defends with a bank of four and five in midfield ahead of the backline. Prior to last weekend's odd capitulation against Watford, Benitez's tactics and coaching had immediately taken effect as Everton were among the league's best defensive teams.

Wolves, meanwhile, had been similarly defensive under former manager Nuno, but an evolution was expected under new manager Bruno Lage. Instead, he has stuck with the five-man defense utilized under Nuno, with midfield duo Joao Moutinho and Ruben Neves tasked with finding passes to creative outlets Adama Traore and Hwang Hee-chan, who has impressed as a new signing this season.

Lage has frustrated Wolves supporters with a lack of attacking intent but they have been unlucky going forward this season, too, with nine goals scored compared to 11.9 xG. The 2.9 difference between goals scored and xG is among the biggest in the league and with a squad not short on attacking talent, positive regression should come.

On the flip side, Everton have been among the most unlucky in defense as they've allowed 14 goals compared to 12 xG against. The collapse against Watford was an example of that as their opponents exceeded their xG by 1.8, with four goals in the final 15 minutes.

All told, there is little between the two. While three places separated them in the table ahead of this weekend, they are sixth and seventh in expected goal differential, with Everton at +2.3 and Wolves +1.5. The clash of styles — or lack thereof — between Benitez's tactics and the five-man backline of Wolves will lead to a deadlock on Monday.

A big reason for Everton's attack remaining potent despite enduring the majority of the season without strikers Richarlison and Dominic Calvert-Lewin is a pair of shrewd additions made over the summer. Andros Townsend, signed on a free after his contract expired, and Demarai Gray have been excellent for the Merseyside club despite both players struggling in recent years.

Gray and Townsend are the leading producers for Everton in attack thus far, with Townsend netting five times and assisting three in 11 games across competitions, while Gray has scored three and added two assists in 11 appearances as well, providing the Toffees with a creative outlet on either wing. Depending on the opponent — and opposing full-back — it has been a season of Gray and Townsend alternating match-winning performances.

On Monday, it'll be Gray's chance to score for his team. Operating down the left, Gray will be defended by wing-back Nelson Semedo, who is in the midst of a several-year-long stretch of absolutely awful play. After being a lightning rod for criticism with Barcelona for years, Semedo appeared to find his level when he joined Wolves — only to then become the weak link in a midtable team.

In great form, Gray has had success against outside backs much better than Semedo this season, and he'll have a great day attacking Wolves' Portuguese wing-back. 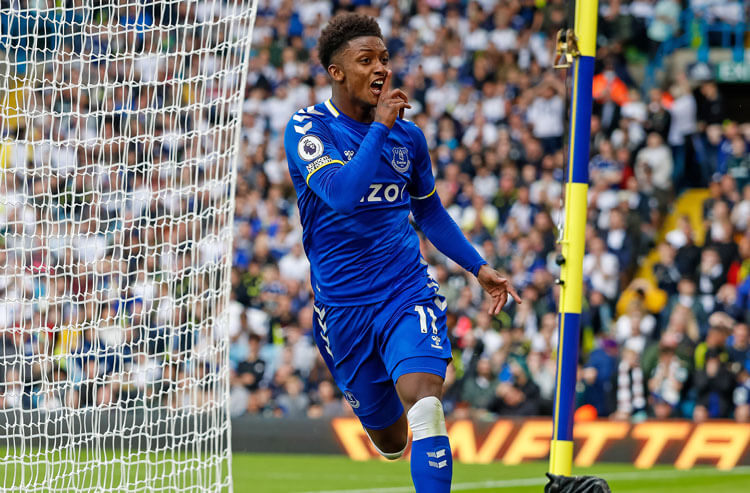 Wolverhampton vs Everton Picks and Predictions: All Equal at Molineux
Provided by