Arsenal vs Tottenham Picks and Predictions: Another Chapter in the North London Derby

Tottenham and Arsenal clash in the latest North London derby, after both clubs have gone through up-and-down seasons up to this point. Find out how one of the Premier League's most storied rivalries will play out this weekend with our picks.

The North London derby will help us finish this weekend of Premier League betting, as Tottenham Hotspur make the short trip to the Emirates Stadium to take on rivals Arsenal on Sunday.

After the pair were comically included in the failed SuperLeague in the spring, they have both gotten off to mediocre starts in the new season to continue several years of middling success in the top flight. However, derbies are typically dramatic if nothing else and thus, Sunday's match should make for fun viewing — and betting.

Keep reading our Arsenal vs. Tottenham picks and predictions and find out how we like it to play out.

It's expected to be a cloudy day in North London on Sunday but otherwise good conditions for Spurs and Arsenal's latest clash in their shared history. Temperatures are expected to be around 70 degrees Fahrenheit at kickoff.

In a rare change, it was Spurs, not Arsenal, who had the drama-filled summer as Harry Kane's transfer saga and a seemingly never-ending managerial search marred the club. However, upon the start of the new Premier League season, it was Tottenham, not the Gunners, who began strongly.

A perfect 3-0-0 start to the new season for Spurs was headlined by a 1-0 win over Manchester City on the opening weekend, as manager Nuno's defensive stability was immediately imprinted on the team, while they got by in attack without Kane. Arsenal, meanwhile, began with three losses out of three, including a season-opening loss to Premier League new boys Brentford and a 5-0 thrashing at the hands of City.

As Spurs have regressed to the level expected of them while Arsenal crawls back toward mediocrity, it has become apparent that very little separates the two rivals. Two straight wins for Arsenal have coincided with back-to-back losses for Spurs, with just three points serving as a buffer in the Premier League table. Both teams' underlying numbers, however, suggest they're even closer.

Arsenal have leaked goals at a horrible rate but have also been unlucky at the other end of the pitch. Though they have scored just twice this season, their expected goals of 6.1 is 11th in the Prem. Spurs, on the other hand, have seemingly been a bit lucky defensively, with six goals against but 8.2 expected goals against. Their win against City was a good example of this, with goalkeeper Hugo Lloris making several timely stops. The two clubs are just 0.2 apart in expected goal differential, one of the smallest margins separating any two clubs in the Premier League so far this year.

Ultimately, we're picking between two unimpressive teams in this match. Spurs have a more talented squad and a better manager but Arsenal being at home, with a full stadium, must factor in — especially with it being a derby. Take the sides to take a point each in the latest North London derby.

After a dramatic summer that included an interview in which he seemed to suggest his time at Spurs was over, a second-place finish at Euro 2020, then a prolonged transfer saga that ended without a move but did delay his return to the team, Harry Kane is back in the Tottenham lineup. Kane got off the mark in the new season, finally, with a goal in a midweek League Cup game against Wolves, and can do wonders for his relationship with Spurs supporters with another goal on Sunday.

Kane is the top scorer in the North London derby's Premier League era, with 11 goals against rivals Arsenal, and has scored in four of the last six meetings between Spurs and Arsenal at the Emirates. His phenomenal goalscoring record in the derby has largely come against Arsenal teams with a considerably better defensive record than the squad that has started this year. Through five matches, Arsenal have allowed the fourth-most goals (nine) and have the fourth-highest expected goals against (9.9).

Against an Arsenal backline yet to show the tactical awareness necessary to defend Kane when he drifts out of position, or the physicality needed in 1-on-1s against him, he will have a successful derby yet again. Count on him to score on Sunday. 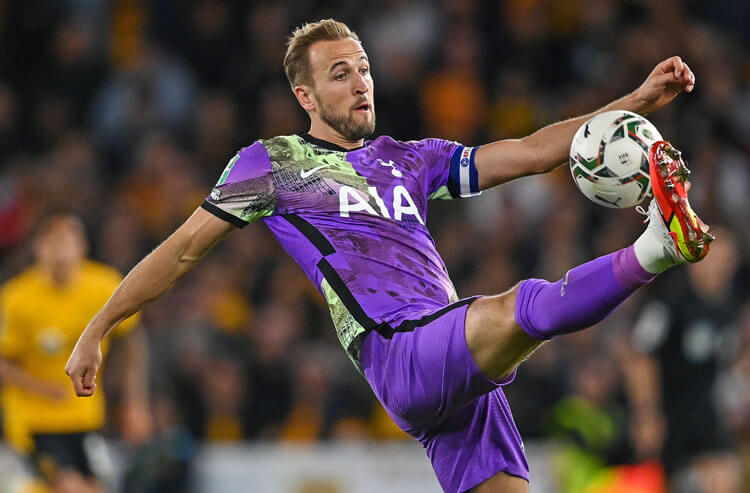 Arsenal vs Tottenham Picks and Predictions: Another Chapter in the North London Derby
Provided by