Crystal Palace vs Brighton Picks and Predictions: Gulls Continue to Soar in the New Season

Brighton have torn out of the gates in the new Premier League season and entered the weekend in the Top 4. In one of the league's loudest environments at Selhurst Park, can the Gulls continue to fly high against Crystal Palace? Read on for our EPL picks.

Another week in Premier League betting draws to a close in London, where Crystal Palace will host Brighton. An excellent start has seen Brighton surge into the Top 4 early in the new season, while a Palace team in transition look likely to get dragged into a relegation battle.

Selhurst Park is an excellent setting for soccer and provides the Palace team with a genuine boost, so how will this play out? Read on for our Crystal Palace vs. Brighton picks and predictions, with kickoff set for 3:00 p.m. ET on September 27.

After rain falls on London throughout Monday morning and afternoon, the clouds are expected to depart and leave clear conditions at kickoff, with temperatures forecast around 60 degrees Fahrenheit.

One of the most pleasing teams in the Premier League to watch since manager Graham Potter took over in 2019, Brighton earned a reputation as a tactically astute team capable of creating a high number of chances but often being incapable of finishing them off.

Last season as Brighton were just a point outside the relegation zone, they should have been in the Top 6 in the league and competing for a Europan place in terms of expected goals. Fast forward a few months and the Gulls entered this weekend with the eighth-most goals scored and, fittingly, occupying a European place in the table. It isn't just a sudden turn of luck, either, as Brighton have a talented and well-drilled backline with genuine quality — their third-best center-back last season, Ben White, was sold to Arsenal for 50-million pounds in the summer — and one of the best defensive midfielders in the country in Yves Bissouma.

An important development in relation to their meeting with Crystal Palace is how strong they have looked in attack this season. While they have regained possession and maintained the ball consistently under Potter, their build-up play has been considerably more decisive and a major part of why they sit on 12 points. They are a genuinely good Premier League side capable of maintaining this form and pushing for a place in Europe throughout the season.

Palace have had a couple of strong performances this season, with a bizarre 3-0 win over Spurs included, but they'll host a side that have a considerable edge on the touchline as far as managers, and in defense and midfield. All Brighton need to do to secure three points at Selhurst Park is continue the rate of finishing they have had this season, and we've gotten no indication of that changing.

In three of the four games Palace have conceded in this season, in all competitions, their opponent has scored in the first half. Teams with poor managers and shaky defensive setups tend to concede early, and unfortunately, Palace may tick both those boxes. Nowhere in Patrick Viera's managerial career has suggested he is a good manager, having underwhelmed with NYCFC and then with Nice in France. At the back, they are counting on considerable inexperience, save for right-back, to improve a goals-against record that finished last season 18th in goals allowed and 16th in expected goals against.

On the flip side, in four of six games Brighton have scored in this season, they've struck in the first half. With a tactical advantage due to Potter in most games and an intense press high up the field — compounded by Bissouma's brilliance in the center — it's no surprise they've scored early and caught their opponent out prior to halftime.

In what should be a relatively easy Brighton win, expect them to take a lead into halftime and hold it through the final whistle. 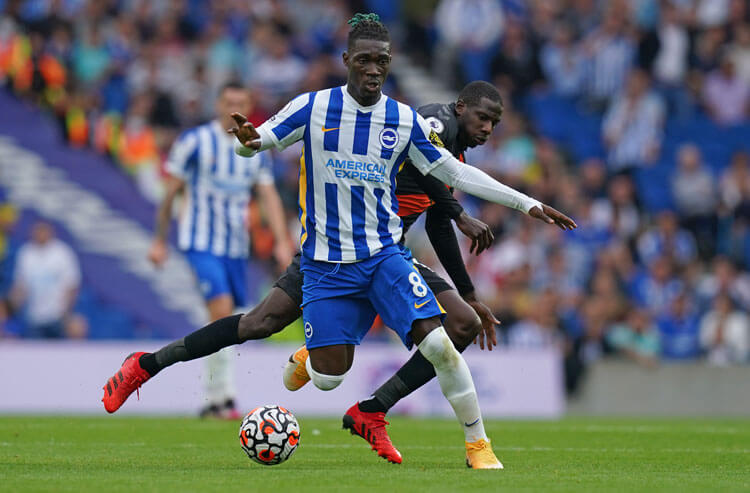 Crystal Palace vs Brighton Picks and Predictions: Gulls Continue to Soar in the New Season
Provided by