Arsenal sits only one spot above Aston Villa on the table, but can the Gunners rally together enough quality at home to secure three crucial points? Find out with our picks.

We’ve had a great week of soccer already with some brilliant Champions League matchups. Now another blockbuster weekend begins with this clash between North Londoners Arsenal and Aston Villa.

A big game under the lights at the Emirates to start off the weekend, you just know that it’s going to be exciting.  Check out our Arsenal vs. Aston Villa tips and predictions.

London will see cloudy weather on Friday, with the temperature around 50 degrees Fahrenheit. We’re not expecting rain and the wind should be fairly mild, giving us good weather for the game when it kicks off at 8:00 p.m. local time.

Only one spot and one point separates these two teams in the Premier League table with Arsenal sat 12th and Aston Villa in 13th. It’s not been a brilliant campaign for either team but the season is still young and both teams have potential to improve.

The season started so badly for Arsenal, losing to Brentford on the opening day before thrashings at the hands of Chelsea and Man City. With manager Mikel Arteta under pressure the team began to improve their form and beat fierce rivals Spurs 3-1 in the North London derby. There was optimism that the team had turned a corner but since then they’ve been held to draws twice against Brighton and Crystal Palace.

Meanwhile, Aston Villa have only won once in the last month, a shock 1-0 win against Manchester United but they’ve struggled in general, losing 3-2 to Wolves last weekend. We knew that it would take time for Aston Villa this season, the loss of Jack Grealish to Manchester City would be a hard one for any team to take, let alone Aston Villa who had Grealish as their talisman. Over the past few years, we’ve seen everything go through Grealish but now Dean Smith’s team are having to bed new players in the line-up as they settle into their new home.

For all of Arsenal’s ups and downs this season they are still deserved favorites here. Their main problem this year has been scoring goals, with only three teams scoring less. With all due respect to Southampton, Burnley and Norwich City, this isn’t the sort of company that Arsenal should be keeping. This is 2021 though and the reality is that Arsenal are no longer a top club within the Premier League but that doesn’t mean they still aren’t good. The guile of Emile Smith-Rowe and Martin Ødegaard should be enough to create goalscoring opportunities for Pierre-Emerick Aubameyang.

Even without Granit Xhaka and Bukayo Saka, who is a doubt, they should have enough about them to secure the three points here. Some of Aston Villa’s most important players Emi Martinez and Douglas Luiz have had long trips because of international appearances, which could hamper them here. It’s unlikely we’ll see Leon Bailey start with the Jamaican’s fitness looking set to relegate him to the bench.

Despite conceding two goals in their draw with Crystal Palace it’s worth noting that Arsenal have conceded just three goals in their past six games in all competitions. Their goal difference in the Premier League is heavily skewed by 5-0 thrashing at Manchester City when they had just 10 players for 55 minutes of the game. Ben White and the excellent Takehiro Tomiyasu have helped make this backline harder to beat and that’s the platform on which they’ll beat Aston Villa. I’m not expecting a high scoring game but this could be a return to the old days when the Arsenal faithful used to sing “one nil to the Arsenal”.

There was a time when Arsenal fans couldn’t stop singing the praises of Gabonese striker Pierre-Emerick Aubameyang. He signed for the club for £56m and instantly started to score, firing in goal after goal, then things started to go wrong. Things started to go wrong last year, a bad miss against Olympiacos cost the team a spot in the next round of the Europa League. Then upon resumption of the Premier League after stopping for the pandemic, he looked out of sorts. Last season he managed just 10 Premier League goals having scored 22 in each of the two previous seasons.

Despite all this it’s worth remembering that Aubameyang has scored 67 goals in 121 games for Arsenal, over a goal every two games, and he’s scored 3 goals this season, making him the club’s top goalscorer.

With Arsenal’s defense much improved it leads me to believe an Arsenal player will open the scoring and with Smith-Rowe and Ødegaard more creators than scorers it leaves Aubameyang the most likely man to open the scoring for Arsenal.

We may see Alexander Lacazette start for Arsenal but there’s no need to be worried about him. The Frenchman has been a disappointment in Arsenal colors managing just 36 Premier League goals in the past three seasons. At odds of +375 it’s well worth backing Arsenal’s number 14 to score the first goal. 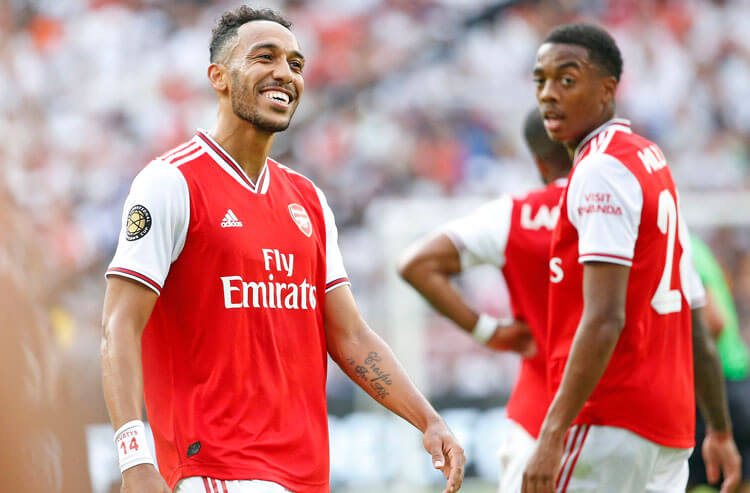 Arsenal vs Aston Villa Picks and Predictions: Crucial Opportunity For Gunners
Provided by

Leeds vs Crystal Palace Picks and Predictions: Plenty of Goals, Short on Defense
Sam Farley | Nov 29, 2021
About Us
Contact Us
Careers
Our Team
Brand
Testimonials