Former OWGR No. 1-ranked golfer Jon Rahm leads a thin field at the Mexico Open and the initial betting odds reflect this with the Spaniard the overwhelming favorite, especially after Daniel Berger withdrew from the competition. Here are the current odds. 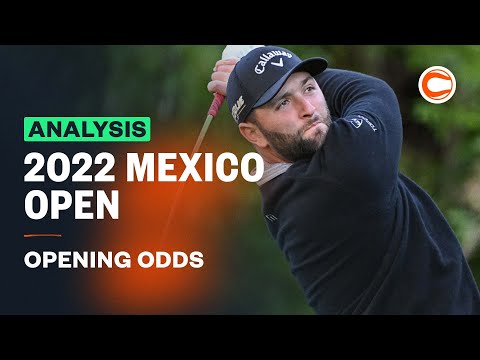 The march to the PGA Tour's second major of the season, the PGA Championship, goes South of the border today at the Mexico Open.

Jon Rahm, the No. 2-ranked golfer in the Official World Golf Rankings, is the betting favorite at Vidanta Vallarta, in what looks to be a relatively thin field of competition.

This marks the first Mexico Open on the PGA Tour. Keep up with the latest odds throughout the weekend below, and you can also check out our lineup of outright predictions as well Tour Junkies' full lineup of best picks.

If you're signing up for a new sportsbook for the Mexico Open, here are two of the best bonuses* available:

It isn't exactly a star-studded tournament with only two entrants (Jon Rahm and Abraham Ancer) currently ranked within the Top 20 in the OWGR. While the tournament has been held annually as part of the PGA Tour Latinoamerica, this is the first year it's presented as an official PGA Tour event with 500 FedEx Cup points going to the victor. Daniel Berger, who was listed as second on the odds board, withdrew from the event on Monday morning, reducing an already-thin field.

Favorites to win the 2022 Mexico Open

Rahm, the former No. 1 golfer in the world, who was recently supplanted by Masters champion Scottie Scheffler, is easily the class of the field, but his year hasn't been an outstanding one on Tour. After knocking down four straight Top-15 finishes to open 2022 — including a second-place finish at the Sentry Tournament of Champions and a T3 at the WM Phoenix Open — Rahm has just one Top-20 finish in his last four starts.

The 27-year-old is consistently in the mix, but he also has only one tournament victory in the last year (the 2021 U.S. Open). Still, one thing he's done better than everyone is reaching greens in regulation, where he ranks first in PGA Tour statistics this year at 73.53%. He's also second in shots gained: tee-to-green behind just Will Zalatoris.

Finau hasn't seen the results he'd like so far in 2022. After finishing 19th at the Sentry Tournament of Champions in January, Finau hasn't done better than his T29 at the Valero Texas Open in early April. He's capable of better, though, as he showed by finishing 15th or better in three of four major tournaments in 2021.

Ancer being third on the board is emblematic of how thin the field is. That's no disrespect to Ancer, who is No. 20 in the OWGR, but he hasn't had a great year. He missed his last two cuts at the Masters and Valspar, respectively, and hasn't finished higher than 33rd in 2022.

Nevertheless, Ancer went on a roll in April and May a year ago, recording three straight Top-10 performances. With a shaky Rahm far and away the betting favorite, there is room for someone like Ancer to take advantage of the relatively sparse competition.

Notable long-shots for the 2022 Mexico Open

Jones has had a year of contrasts. The 42-year-old Aussie has two Top-3 finishes, including his runner-up spot at the Valero Texas Open, and also missed three cuts in a row in January and February. A win might be tricky, but another Top-5 or Top-10 is certainly doable, and he can be had at +1,200 or +600 at DraftKings for those, respectively.

Theegala is getting his reps in. He's entering almost every field he can, and the 24-year-old has done well in spots. Theegala finished third at the WM Phoenix Open in mid-February and had another Top-10 performance at the Valspar Championship in March. He missed cuts at the Arnold Palmer Invitational and The PLAYERS Championship in back-to-back weeks but otherwise has played into the weekend every time out. He's yet to win on the PGA Tour. Could this be his breakout?

This year's tournament will be held at Vidanta Vallarta in Vallarta, Mexico from April 28-May 1.

This is the first year that the Mexico Open is officially a part of the PGA Tour. In 2021, on PGA Tour Latinoamerica, Alvaro Ortiz won by three strokes over Drew Nesbitt.